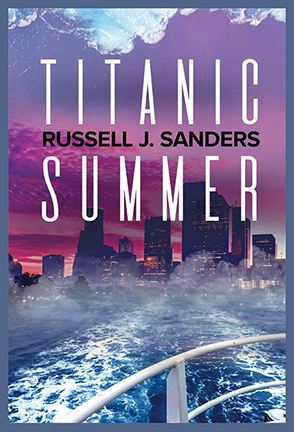 Parents can be so weird.

Take your dad, for instance: he’s got hobbies that defy logic and he’s obsessed with them. Your mom, well, let’s not go there, except to say that if you became her mini-me, she’d be fine with that. Irritating, yes, but what are you gonna do?

As in the new book, Titanic Summer by Russell J. Sanders, whatever floats their boats.

“Your mom and I have some news.”

Those are words that no twelve-year-old boy wants to hear, but Jake Hardy heard them and everything in between: his parents were getting a divorce.

Jake had, in fact, just come to that realization himself in the past year or so but he wasn’t sure where to go with it. His school was conservative Christian and homosexuality was forbidden in the school code. Jake couldn’t risk being thrown off the basketball team, so he hid his physical desires. He now had the whole summer to think about everything and make some decisions.

Fortunately, he’d do that while hanging out with his dad in Philadelphia.

Unfortunately, his dad had other plans: he was a history buff and was seriously obsessed with the Titanic. He’d watched the movie hundreds of times and, to Jake’s dismay, had scheduled a ten-day father-son trip to Halifax, Nova Scotia.

That’s where some of the Titanic’s dead were buried.

That’s also where gay-boy Jake learned that his dad was gay, too.

Which was just great, because Dad could’ve been less-secretive and that would’ve helped Jake deal . . . but no. Instead, Jake got secrets and omissions from both his parents, which made him angry, and his bestie offered no sympathy. He found a new friend, but even that was awful. Was pretending not to be gay the easiest way to live?

Though it tends to be somewhat overly long and overwrought, Titanic Summer is overall better than average.

Part of that may be because author Russell J. Sanders puts authentic teen language into the mouth of his main character. Sanders’ Jake speaks in the style and manner you’d expect from an attitudinal sixteen-year-old boy who’s trying to please everyone; that he fails, and sometimes becomes unlikeable, only enhances his realism.

The authentic dialogue affects the story itself, but in one distracting way: the plot is enough to keep a reader’s attention, but it’s also too long and contains inconsequential details, as if every second of the titular summer needs recording. A few editorial snips would have been a lifesaver.

Even so, that’s minor compared to the waves of enjoyment you’ll get from this story, whether you’re 13-to-17-years-old, or an adult who’s well past those years. Readers craving a coming-of-age novel will find Titanic Summer to be a boatload of goodness.▼