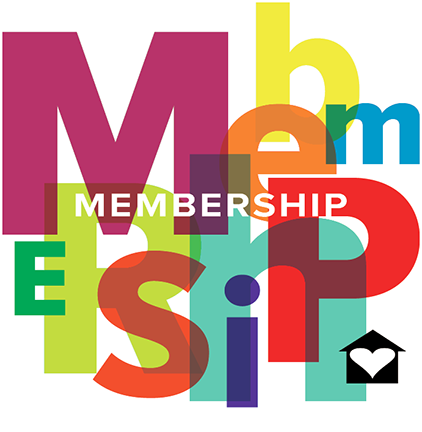 There’s No Place Like Home, and That’s CAMP Rehoboth

“Lions and tigers and bears, oh my!” Admit it. You heard a certain cadence in your mind’s ear when you read those words. The rhythm reflected the emotions of an unlikely trio of characters in a movie made nearly 80 years ago.

The film classic The Wizard of Oz was released in 1939, and, according to the Library of Congress, has since gone on to become the most seen film in movie history. Many of the film’s lines have become part of our popular culture. As familiar as this movie is, there is a contradiction at its core missed by many.

Dorothy Gale (played by the iconic Judy Garland) sings of her desire to go “somewhere over the rainbow, way up high” to a land where “dreams that you dare to dream really do come true.”

However, as soon as she gets to this magical place, she spends the bulk of the movie trying to get back home! Along the way, Dorothy makes three friends with their own needs. One seeks a brain, another a heart, and the third “the nerve” or courage.

Yes, it takes a truly magical place to meet all four goals. Fortunately, Rehoboth Beach has that magical place—the CAMP Rehoboth Community Center. And it served over 13,000 individuals in 2017 alone through its activities at 37 Baltimore Avenue.

CAMP Rehoboth is a place that engages the brain, touches the heart, instills courage, and provides a home with room for all. Here’s how.

Since its beginning nearly thirty years ago, CAMP Rehoboth has been the catalyst for bringing together diverse parts of the community and providing valuable information and services for all. Its publication Letters from CAMP Rehoboth started as a four-page newsletter but has grown to a high-quality magazine, published 15 times a year, with an estimated readership of 5,000 per issue — in hard copy. And that’s not counting thousands of online readers.

These days, a typical issue is about 100 pages, filled with news, humor columns, book reviews, restaurant critiques, wedding announcements, and obituaries. The Volunteer Spotlight and Before the Beach articles introduce readers to fascinating people in our community. Of course, we also see lots of community faces in the always-popular CAMPShots.

Then we have the ads—as informative as they are colorful, highlighting upcoming events and our local businesses. While Letters may be the most visible way CAMP Rehoboth shares information, it’s not the only way. The website (camprehoboth.com) boasts an average of 20,000 visits per month, and you can call and drop by our physical space too. In 2017, trained volunteers provided help and information to 722 individuals.

At the heart of its mission statement (on page two of Letters), beyond being an active LGBT service organization, CAMP Rehoboth affirms its commitment to “promoting artistic expressions and creative thinking, and giving aid to artists and craftspeople with an emphasis on the works of lesbians and gay men.” Camp Rehoboth sponsors concerts, plays, book signings, musical performances, art shows and other cultural and public gatherings—to reach people’s hearts.

In 2017, there were eleven art shows in the CAMP Rehoboth gallery space, with the works of 91 new, emerging and established artists. An AIDS-related art show titled “AIDS in the City and at Home,” held around World AIDS Day, prompted one visitor to comment, “[It was] a very powerful exhibit! It reminded me of my brother who died of AIDS in June 1985…and I could never put into words the feeling of devastation and loss that he and his friends were experiencing.” The arts can do exactly that, for us as individuals, and as a community.

Our thriving CAMPus on Baltimore Avenue is evidence that LGBT people have gained equality and the inherent right to participate fully as citizens who benefit from and contribute to society.

In times of great joy or great sorrow, our thoughts often turn to home and those we love. For the LBGT community, “home” is often the CAMP Rehoboth Community Center. People naturally congregated at CAMP Rehoboth both on the day when marriage equality became Delaware law and also with the Supreme Court’s marriage equality verdict. Balloons and champagne magically appeared.

However, the real measure of CAMP Rehoboth’s impact can be seen at the other end of the spectrum. When times get tough, where do people turn? They turned to CAMP Rehoboth two years ago after the Orlando shooting at Pulse, a gay nightclub. The horror stunned the community and many of us needed to be with others. In the space of only a few hours (and on a Sunday, at that), CAMP Rehoboth staff and volunteers put together a vigil in the CAMP Rehoboth Courtyard. We were there for one another for comfort and support. And isn’t that what Home, in its purest sense, is all about?

In CAMP Rehoboth, we have all these things and more. Sustaining memberships allow us to program and plan and keep the lights on for everyone. So please, join CAMP Rehoboth as a member or renew your membership this month by stopping by or at camprehoboth.com. Welcome home. ▼ 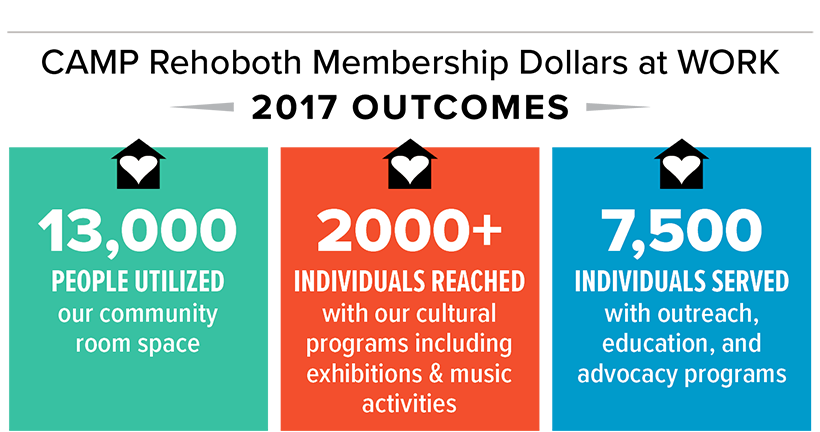