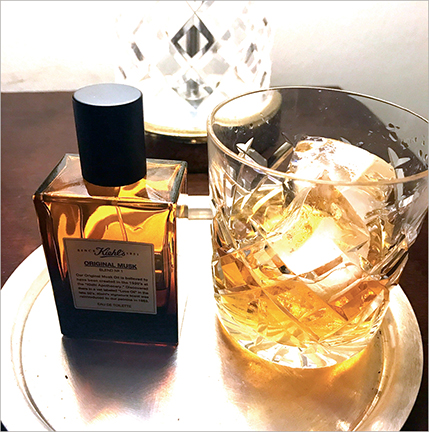 Who doesn’t like it when a good-looking fella says you smell good? This happened to me the other night in the Blue Moon, and it led to an interesting conversation with some of the patrons at the bar, about cologne.

I’d say more than half of the men I questioned about their cologne preferences claimed not to wear any. Most of them were on the younger side, which could either mean they are rejecting what previous generations of gay men did or they really prefer the natural smell of a man. Maybe today’s popular scented body washes are negating the need for cologne? Who knows, but whatever the reason, it surprised me.

You see, I came of age in the 1980s, the great decade of men’s colognes. That’s when men moved from drugstore classics like Brut and English Leather to fragrances created by the day’s top fashion designers: Halston, Ralph, and Calvin.

Cologne advertisements began to sexualize the male body, especially the ones created by homoerotic photographer Bruce Weber. And who can forget the ubiquitous green bottle of Polo or the sleek black bottle of Drakkar Noir? Both are among the most iconic men’s colognes and both are still being produced decades after their introduction.

My own “scents-ability” about cologne evolved over the years. When I first arrived in the city in the 1980s with no job and was camping out on a friend’s sofa, I had to creatively manage my limited finances. It meant choosing between buying cologne or liquor. You won’t be surprised to know I spent my meager dollars on Virginia Gentleman bourbon, which I dabbed on the back of my neck and on my chest. Don’t laugh; I was ahead of my time. I’ll have you know today’s colognes are experimenting with all sorts of “manly” scents and bourbon is one of them.

Polo and its woody, mossy scent eventually replaced whiskey to become my default cologne for no particular reason other than habit until early in the new century when I discovered Creed’s Tabarone in a boutique in New Orleans’ French Quarter.

Its hundred dollars plus price tag for two and a half ounces was steep, but the bottle looked aristocratic, a nod to the company’s heritage. Founded in 1761, the House of Creed supplied cologne and perfume to European royalty. Tabarone’s aroma of tobacco, patchouli, sandalwood, and leather was unlike anything I’d sniffed before, and I had to have it.

Eventually, though, I tired of paying the high price to smell like Winston Churchill. Yes, supposedly, he favored an earlier Creed scent very similar to Tabarone. For a couple of years I played the field, drifting from cologne to cologne, lured in by an attractive looking bottle or a clever name. Nothing stuck. Then about five years ago, I stumbled upon an intoxicating fragrance in a small brown bottle with a black cap. I know what you’re thinking . . . but this was musk not Rush.

Musk is a polarizing scent. You either like it or you don’t. It’s an old scent, harvested originally from a gland of the male musk deer and prized for its storied aphrodisiac powers and animalistic, earthy aroma. Fragrance makers today mostly use synthetic alternatives.

The musk fragrance I discovered is made by Kiehl’s, an old company based in Brooklyn, New York. It was originally produced in 1963 and derived from a formula created in the 1920s and labeled “Love Oil”—if you believe the story on the bottle. Professional sniffers tout its creamy base of tonka bean and sweet musk and notes of citrus, bergamot, rose, and neroli, none of which I can detect and most of which I have no idea what it is. I just like its old-school smell.

Of all the colognes I’ve used over the years, it’s the only one that I’ve been consistently complimented on. Well, except for the bourbon. It drew men like flies, especially the married kind. But that’s another story for another time… ▼