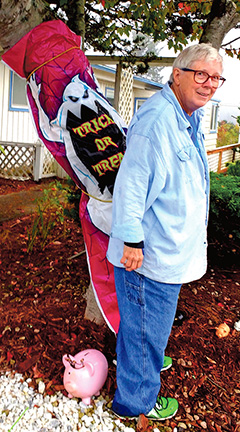 Oh, yes, we had fun this year decorating for Halloween. For a couple of hours, I didn’t once think about the ghouls in DC.

We don’t get trick-or-treaters here, but we do have a lively neighborhood of adults from 55 to 95, ourselves included, who get a kick out of holiday trappings. Our plastic Frankenstein mat screeches bloody murder when we open or close the garage door. Half the time we scare—and laugh—ourselves silly.

It had been many full moons since we last dragged out our spooky paraphernalia. My sweetheart exhumed it from the treasure chest that is our garage and instructed me to decide what should go where. Me? Organize? The prospect was scarier than an army of menacing phantoms.

While my sweetheart turned the inside of our home into a nest of funny hobgoblins and jack-o-lanterns that looked as if they had severe indigestion, and while she dangled strings of orange mini-lights and hideous witches with flapping accordion legs, I worked outdoors. Sometimes it’s for the best to work separately; to put it nicely, we don’t trip over each other’s creativity that way.

We have a phenomenon in the Pacific Northwest we call dry rain. It could also be called dripping fog, or micro-drizzle, or in season, witch spittle. I braved the spit with an armload of orange and black regalia, various strengths of fishing line, a k-bar knife, and my thumb braces (tying knots in fishing line is not recommended for the arthritic). I decorated everything from the driftwood in our front yard to the bike barn to the maple tree. By the time I went inside to admire my sweetheart’s lovingly placed handiwork, my t-shirt, work shirt, and jeans were soaked through with witch spittle.

It wasn’t until a few days later she mentioned that the decorating spirit took hold of her for a reason. We needed to brighten up our lives. Midterm elections would be held a few days after Halloween and we were witnessing howler monkeys amass in support of a monstrous pretender to the presidency, shouting “Lock her up!” about Senate Minority Leader Diane Feinstein for the sins of fighting for human rights, gun control, income equality, and other issues essential to a thriving country.

The dismantling of our beloved democracy has sickened us. We are feeling its effect even in our humble home. My sweetheart’s job disappeared some months ago. Despite supposedly low unemployment statistics, despite her skills and competencies, despite her willingness to accept work far beneath her considerable abilities, we live in a trump world right now, where the job openings may be many—if you’re not age 57 and a woman.

The disappearing job and the fact that my income is from Social Security led us to cancel a visit to Provincetown for Women’s Week to celebrate our eighth wedding anniversary. Instead, we sought distractions to cheer ourselves at home.

Decorating done, we decided to celebrate our anniversary locally, with a restaurant gift coupon we’d been hoarding. We were still on a high from our community potluck where, in our 97% non-gay neighborhood, the month’s anniversaries, including ours, were announced to spirited applause.

The Pacific Ocean was dark outside the restaurant window as we remembered the happy wedding eve when our birth families, astonishingly, met in Provincetown. Now, eight years later, my sweetheart had a need to tell the waitress why we were at the restaurant. The waitress beamed, congratulated us and said she wished she’d known: she would have drawn hearts in our desserts.

We needed to be boldly out to disrupt our fears. We had to celebrate our marriage while it’s still legal. We had to be out to the sweet, well-meaning people who congratulated us in hopes they would understand the connection between their votes this mid-term election and our happy gay marriage.

And for those not ready to celebrate us and our equality, may they be sprayed with witch spittle. ▼

Lee Lynch is a pioneering, award-winning LGBTQ writer, author of the classic novel The Swashbuckler. Her latest novel is Rainbow Gap.