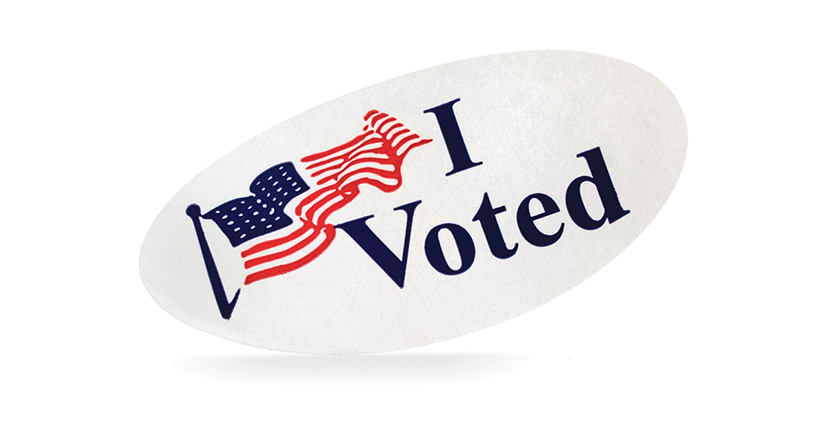 Where Did that “I Voted” Sticker Come From?

Last week, Delaware had its primary elections, and first and foremost, thank you to everyone who ran for office. This issue is about community, and to those who won, and to those who didn’t win, thank you for caring enough about our First State to put yourself out there.

I’d also like to take a moment and give a special shout out to two of the candidates who ran for the U.S. Senate this year, Democrat Kerri Harris and Republican Gene Truono, both of whom are openly gay. And that’s a good thing.

As I kept an eye on the returns, something on CNN struck a chord. In speaking about Harris’s challenge to Senator Tom Carper, they commented, “Respectful, per Delaware’s exacting demands for politeness in the political arena.…”

Per our demands for politeness in the political arena.

How cool is it that we demand politeness? How sad is it that we seem to be an anomaly? How lucky we are that we had people who cared enough to be classy!

And as the b-roll aired, I smiled as I caught sight of the multitudes of “I Voted” stickers, and then wondered, when exactly did that become a thing?

Time for the magic Google-lator machine…which led me down the rabbit hole to the history of the campaign button.

Which, it turns out goes back quite a ways. Seems during the very first United States of America inauguration, back in 1789, there was a metal pin, kind of like a brass button, given as a commemoration to Washington’s supporters. It had the initials GW and read, “Long Live the President.”

History doesn’t seem to know if that was simply happenstance wording or a deliberate dig at their old frenemy from across the pond. Hmmmm.…

But leaping forward, for a while it seems the odd commemorative button was given out here and there, right up until 1828. That would be the year Andrew Jackson ran against John Quincy Adams. Jackson, you may recall, first ran for president in 1824. He lost. So this time he threw himself parades, events, and tossed about lots of memorabilia. There were snuff boxes, flasks, and assorted buttons all designed to showcase his military successes.

In turn, the campaign became a mudslinging fest, with each candidate trying to discredit the other.

In the end, Jackson’s merchandizing is credited with winning the day, as he defeated John Quincy Adams handily. It is also credited with helping to set a precedent for all following elections, giving rise to the merchandised campaigns we see today.

And time marches on. In 1861, as Abraham Lincoln ran for president, pins with a ferrotype (a photograph made of tin and dark enamel or lacquer) of his image became the first campaign buttons to use a picture of a presidential candidate. These pins featured Lincoln’s image on the front and a locking pin on the back.

By 1896, the first mass-produced and collectible buttons for presidential campaigns arrived in time for William McKinley running against William Jennings Bryan.

That’s when the company Whitehead and Hoag in Newark, New Jersey, patented pin-back celluloid buttons. They had a metal back, with a straight pin attached. On the front, there was a celluloid covering to protect the image.

These buttons could be produced for a reasonable price allowing candidates to distribute them widely and use them as true campaigning tools.

The McKinley/Bryan campaign buttons are remembered for more than just their look. That election year there had been a lunar eclipse. Playing on what was happening celestially, campaign pins for McKinley depicted the Democrat’s photo crossing over and “eclipsing” a photo of his Republican rival. Bryan’s campaign did the same, with slogans including “Total eclipse Nov. 6” and “Partial eclipse will be total in November.”

And now, there was no stopping it. In 1924, Calvin wanted us to “Keep Coolidge” and in 1952, perhaps the most famous of them all made its debut, the very simple Dwight David Eisenhower’s “I Like Ike.” As an aside, this was also the first campaign to successfully employ the “bumper sticker,” leading us to “bumper sticker politics,” which is still with us today. Bumper sticker politics. People relying on slogans or soundbites rather than researching issues for themselves, giving us politicians more concerned with branding and marketing than with actual content.

As for my original question about the appearance of the “I Voted” sticker, funnily enough, no one knows for sure when that happened. It seems to have first appeared in 1982 in Ft. Lauderdale, but that’s a best guess. What’s not a best guess is they are now a $30 million per year business!

So button or bumper sticker, “All The Way With JFK” or “Wild About Harry,” the point is to take pride, wear your campaign gear, and whatever you do, get up and vote. Your community needs you.

And remember, let’s do it the Delaware way: keep it civil and classy. ▼

Stefani Deoul is a television producer and author of the award-winning YA mystery On a LARP.