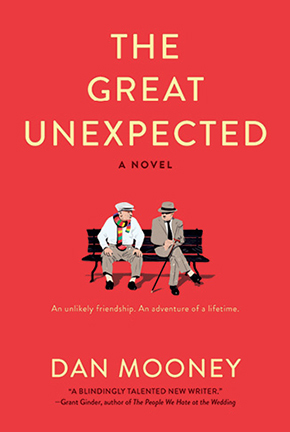 You had your reasons.

That’s what you tell people after you’ve made a decision. Things were left up to you, you looked at the possibilities, and there was no need for discussion. You had your reasons, and “because” is a good enough one. But, as in the new book, The Great Unexpected by Dan Mooney, you can be reasoned with.

That was because he was in a coma, which was just fine with his roommate, Joel Monroe. Miller didn’t fill the time with inane chit-chat and Joel didn’t have to be concerned with niceties. Miller kept to himself. After Joel’s wife, Lucey, died, Joel wished everybody at Hilltop Nursing Home was more like Miller.

Given that, it seems odd to say that Joel was lonesome, but he was. Miserable and grumpy, too. Then Miller died, and it reminded Joel of Lucey’s death, which made him feel worse, even though Nurse Liam and Nurse Angelica were nice; even though Joel had a daughter who dutifully spent a half-hour a week visiting; even though she brought her adult children, who obviously weren’t interested in their grandfather.

Joel knew it was time to investigate suicide options, “before something else killed him.”

And then a new resident moved into the empty bed next to Joel’s.

Frank de Selby was a noisy “popinjay” with a fake accent and a fake name. de Selby (real name: Frank Adams) wore scarves with affectation, kissed ladies’ hands, was oh-so-witty, spoke like a Shakespearean, and told everyone that he was a former actor.

He hated Frank—at first, anyhow, but then Joel realized that Frank wasn’t such a bad guy after all. Without being asked, Frank helped Joel out of a couple of tight spots with the home staff, and he didn’t make Joel watch those insufferable soap operas.

He even helped take notes when Joel told Frank about his plan to die.

Joel was intent on suicide. He wanted to kill himself with meaning, though, and he was ready to go—but was he ready to leave so much behind?

Of course, you’ve already figured out that this book is a charmer. You might clearly see that it’s got humorous elements, too, but you really can expect so much more in The Great Unexpected.

Yes, Frank and Joel are pretty well predictable as characters in a novel set in a nursing home. But here, author Dan Mooney gives them sass, peppery language, and fits-with-today backgrounds that allow richer dimension to explain them better.

Their miles-apart personalities enhance the story: Frank has justification for playing the dandy, Joel ruminates about a life spent as a laborer, and readers learn about them as they learn about each other.

Happily, this unfolds between lines of text that match the title: unexpected, and uproariously, spit-your-coffee hilarious.

So. The Great Unexpected is differently predictable but its sauciness may give some readers pause. Just keep that in mind, flow with it, and you might love this novel beyond all reason.▼