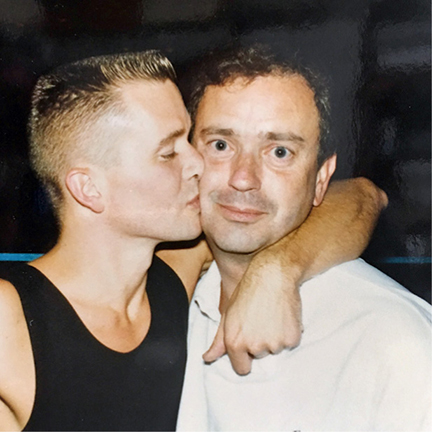 Earlier in the summer, I posted a photo on Facebook of Steve and me at the first Sundance back in 1988. The two of us were in the DJ booth at The Strand. My arm is around his neck and I’m kissing him on the cheek. He has a sweet and happy look on his face.

That photo was well liked by my Facebook friends.

That first Sundance was our tenth anniversary party. We made it a benefit in an effort to make us feel less impotent in the face of the AIDS epidemic raging around us at the time. That was 32 years ago.

I have been producing Sundance for half of my life.

Hold that thought. I’ll get back to Sundance in a moment.

First, I watched Boy Erased, the 2018 film based on Garrard Conley’s memoir of his time in a gay conversion program. Lucas Hedges plays Jared Eamons (the Conley character in the film). Nicole Kidman and Russell Crowe portray the parents. Joel Edgerton is the chief therapist at Love in Action, the gay conversion therapy assessment program.

Next, I watched the Aretha Franklin documentary Amazing Grace. The film was shot back in 1972 during the two-night live recording of Aretha’s beloved gospel album by the same name. Due to syncing and other issues, the film was not seen until its premier in 2018. It was released worldwide in April of 2019. Sydney Pollack directed. On the second night of filming, Mick Jagger and Charlie Watts are briefly shown sitting in the back of the room.

Finally, I listened to a TED talk by Dr. James O’Keefe (and posted it on my FB page). While I had read much of what he had to say before, O’Keefe’s insight about why homosexuality is a necessary part of life, is riveting and personal. “It’s about survival, not sex.” He says.

Okay, that’s the background. Now back to Sundance.

Boy Erased is the far-right end of the anti-LGBTQ movement nurtured in large part by conservative religious organizations. The film illustrates the extreme wounding of LGBTQ people in conversion therapy facilities. But make no mistake; queer people are wounded every day by the words and actions of less controversial religious bodies. Look no further than the global Methodist church for proof of that.

“I came to therapy thinking that my sexuality didn’t matter, but it turned out that every part of my personality was intimately connected,” Garrard Conley writes. “Cutting one piece damaged the rest.”

On a larger scale, that is exactly the point of Dr. O’Keefe’s TED Talk. When the individuals tasked by nature to help make life better for their families and communities are damaged, the whole community suffers. O’Keefe makes it clear that LGBTQ people have an important role to play in the world. Not better, different.

Sometime in the year or so before Steve and I moved from New York City to Rehoboth Beach fulltime—I believe it was 1989—Steve walked through the door of our Union Square apartment with a tiny toy mouse in his hand. “Here,” he said, “I thought you would like this. I got it from a man on the corner.”

Turns out, the tiny toy mouse was not the important part of what he picked up from that mysterious “man on the corner.” There was also a book. A tiny book, hand drawn front and back. Measuring only a little bigger than two by three inches. The inside pages were full size typed sheets, photocopied and reduced.

The mouse broke or I lost it a long time ago. The book I still have. It fascinates me. I have to read it with a magnifying glass—even more so now than I did 30 years ago! Titled The Mouse Book by Bill Ragael, there is a simplistic line drawing of a mouse on the cover. “FREE Mouse!” it reads, “With Each Book $1.00. The book was the important part all along.

Inside there is a fully developed Mousism Theory I don’t have time to discuss, but the last pages of the book contain the 10 commandments of Mousism. Number six has bounced around in my head for 30 years. “Remember that your enemy does not know who he is. It is your duty to let him know who he is before he harms himself by harming you.”

Deep in the heart of the CAMP Rehoboth philosophy, that concept has always been present. Creating a positive environment for LGBTQ people creates a healthier community for all of us.

The language of hate we hear in the world today goes far beyond LGBTQ issues. Hate is evil. It corrupts. It wounds people—physically, spiritually, and mentally. It wounds us as a society. It hurts us all, whether it is directed at us or not.

The Aretha Franklin Amazing Grace documentary works so beautifully because there are three main components. Aretha herself, and that soul stirring, gut wrenching voice; the Southern California Community Choir directed by Alexander Hamilton and featuring singer and piano accompanist James Cleveland; and the congregation who participate fully in the recording.

No wonder Mick Jagger simply wanted to sit in the back and absorb the sound.

In a room full of people who over the decades have suffered more hate and hurt than any white person could ever understand, the love, the grace, and the pure soul in that room is breathtaking. It is the sound of healing. The sound of community.

A boy almost erased. Amazing Grace. A TED Talk. Life bombards us with disparate information and inspiration, with pain, with family and friends, with love and hate, joy and despair, with grief and with laughter.

Sundance has been a success for 32 years because it provides an opportunity for us to celebrate and support the work of CAMP Rehoboth. More importantly, Sundance unites us as a community. For a brief moment at the end of every summer, we make time to let go of stress and worry, we make time to hug one another, we make time to laugh and to love.

We make time enough to dance. ▼