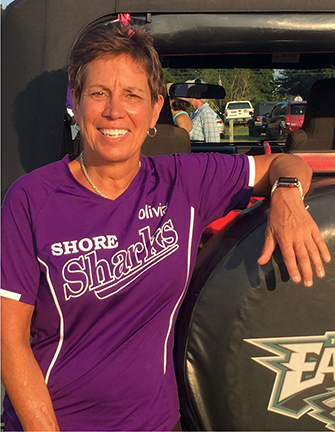 Have you ever wondered what happens with local sports opportunities for women once cooler weather moves into our area?

Sure, some women are lucky enough to head someplace warm for the winter, but what about athletes who stay in Rehoboth Beach? Do the softball players stay home and watch football? Do the pickleball players find indoor courts to keep them moving? Maybe the golfers find apps on their phones to play virtual golf in the winter?

Well, all that is true, but also, starting in October, many of these athletes head out to Millsboro Lanes to play in the Wednesday night Rainbow Ladies Bowling League.

The Rainbow Ladies league was started by a local bowling legend, Rina Pellegrini. Rina grew up bowling in North Jersey, winning a mother/daughter tournament at the age of 10 (one of her favorite memories!) and junior tournaments at the age of 16.

Then she started bowling in five adult leagues and worked at the Paramus Bowling Alley while attending college. She graduated from Montclair State College with a degree in mathematics and computer science, bowling all the while.

She turned professional at the age of 23 and traveled the country to compete in Michigan, California, and of course, Ohio. I say “of course” because I was born and raised in Akron, Ohio—known as the bowling capital of the world.

I know this because I spent my own teenage years in smoky bowling alleys all over the Akron area. My brother is in the Tri-County Bowler’s Hall of Fame, with three 300 games. Bowling is simply part of growing up in Akron. But believe me, I’m no Rina Pellegrini.

She continued to bowl part-time as a professional, but also joined the Women’s All-Star Association (WASA). WASA is an Eastern regional semi-professional association that hosts tournaments on weekends. Rina was named WASA Bowler of the Year in 1981 and won several tournaments. She has two 300 games and her highest series was a 796. Rina’s highest average was 223 and she averaged over 200 for 20 years.

Rina moved from North Jersey to the Philadelphia area and worked for SmithKline Beecham, continuing to bowl in three leagues. She competed in local, regional, and state tournaments, winning many Camden County awards. In 1996 Rina was inducted into the Camden Suburban Bowling Hall of Fame.

Rina has been a Rehoboth weekender for over 20 years, but six years ago, when she moved here full-time, she started the Rainbow Ladies Bowling League. She had six teams participating and they bowled at Millsboro Lanes. They now have 16 teams of four women each and a list of over 50 temporary substitutes available to play each week. Despite some serious back and neck issues, Rina is still bowling today. She had to move to a much lighter ball, but still manages to carry a 188 average, for the highest average in the league.

According to Rina, the league is designed to be a friendly, social gathering with some bowling going on during the socializing. Rina notes it’s not as serious as local softball or golf leagues.

The league season is split into two parts. The first runs October through early January and the second half is January through April. This allows snowbirds who leave in January to participate in the league. At the end of each session, team members are awarded trophies and prize money.

You can tell by the team names exactly how serious this league really is: They include the Striking Mummers, 3 Beers & A Water, Wrecking Balls, and Girls Rule, just to name a few. But the league does keep statistics on each team and Rina tracks the high scores of teams and individuals.

Some of the highlights of last year include season high games of 254 for Rina and 221 for Diane Braver. The Striking Mummers had a combined team high score of 721 and the Single to Spare team combined for a season high 674. The individual averages range from about 80 to 190, with room for all to participate and have fun.

Are you interested in bowling this fall? If so, please contact Rina Pellegrini at rpelle6469@gmail.com The Rainbow Ladies League bowls three games on Wednesdays starting at 6:45 p.m. The cost for league play is $16 and shoe rental is $2.

You can sign up for either or both halves of the season and you don’t have to know anything about bowling. The league is just looking for folks interested in having a good time. Contact Rina and come out to Millsboro Lanes and watch our local bowling legend, Rina, try to roll her next 300 game. ▼

Anita Pettitt is a former marketing executive and current small business owner in Rehoboth and NJ. She’s played multiple sports all her life, but now concentrates primarily on her golf game.