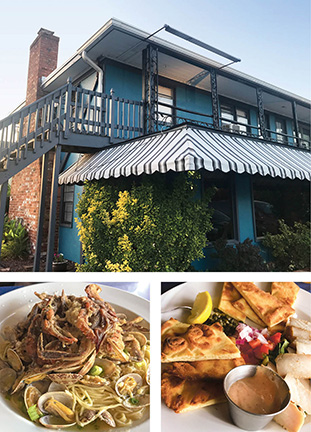 Finding a Gem Just in Thyme

The venerable Just in Thyme was packed last Sunday night, with a busy bar—and it’s one of the most comfortable, friendly bar rooms in the area—and diners at almost every table.

It’s earned its good reputation from 30 years of doing business in the area, first, decades ago, as Potpourri on Rehoboth Avenue, then moving out to the ‘burbs on Robinsons Drive just off Route One’s Forgotten Mile.

But clearly, the mile may be forgotten, but not Just in Thyme. And time itself has been wonderful to this restaurant. Its long-ago reputation for comfort food and bar dining has been completely upended in favor of an adventurous menu, a touch of New Orleans flavors, and gourmet dining. Just in Thyme has upped the bar and food while keeping the comforting and welcoming atmosphere.

Host Patrick seated us at a table for two in the porch dining room, where we tasted several appetizers including the braised beef on stoneground polenta with mushrooms. It was hearty, delicious, and surprisingly different.

On the advice of waiter Ben, we followed up with Crawfish Beignets, which were New Orleans hush puppies, complete with the powdered sugar. I worried they’d be too sweet, but the dish was actually flawless.

Next we sampled the Smoked Fish, which I imagined coming as a dip on the naan bread noted on the menu. No, the house-cured fish was presented thickly sliced, with capers, onions, and NOLA remoulade sauce on crispy naan. It was a large enough portion to share and I see myself stopping by again soon at happy hour to savor it at the bar along with a Cosmo.

We also shared the pecan-crusted rockfish topped with giant lumps of crab. Truly giant lumps. It was accompanied by impeccably sautéed green beans (and that’s an art), carrots, cauliflower, and rice. The rockfish was also prepared brilliantly. Owner/chef Jon Orlando, and chef Justin Giles made magic.

Other menu items I will be back to try include Shrimp and Grits, Thai Chicken and Shrimp Curry, Crawfish Etouffée, Pork Orleans, Pan Seared Scallops, Bouillabaisse, and for landlubbers, a grilled Filet Mignon and Rack of Lamb.

As if we needed it, we shared a slice of Black Forest Cake to finish the meal. It was moist, surprisingly not overly sweet, with delightful cream icing and tart black cherries, as well as an artfully-designed black cherry and vanilla coulis.

The price points at Just in Thyme are comparable or slightly lower than other gourmet eateries in the area, but the meals are more than comparable. In addition, there are less expensive po’ boy sandwiches and salads on the menu, along with several hearty appetizers that could do well as entrees.

Just in Thyme is open daily from 5 p.m. to 1 a.m., with a special 5-6:30 p.m. happy hour menu. I’m happy to have rediscovered this gem just in time to put it on my go-to favorites list for later summer and fall. I think you’ll love it too. ▼