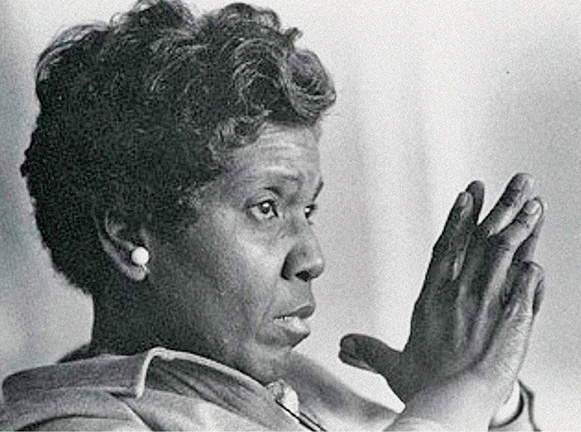 This summer has been one helluva trial: the weather, as I write this, is a suffocating blob of heat, the political news is ugly, Americans are baring our overheated, dog-days teeth at each other. We need a cooling rain and a clap of thunder to bring us to our senses.

A clap of thunder made history and brought America to its senses on July 25, 1974, when, in the words of Max Sherman, Professor Emeritus at the Lyndon B. Johnson School of Public Affairs, at the University of Texas, three-term Democratic congresswoman Barbara Jordan spoke “truth with eloquent thunder.”

In a speech considered by many scholars to be among the finest in American political history, Jordan, a junior member of the House Judiciary Committee, clearly and powerfully articulated the case for the five counts of impeachment against President Richard M. Nixon at the televised Watergate hearings.

At the conclusion of her speech, the rafters of the House of Representatives not only shook, they bowed in reverence. A superior intelligence had filled that august chamber. With warmth, clear headedness, the resonant voice of a classical orator, and the authority of knowing whereof she spoke, Jordan schooled the nation on the beauty of our Constitution and the responsibilities of a democracy.

Jordan’s stunning speech, and the nobility with which she delivered it, captured that tortured moment in our American soul. America saw and heard a woman—a southern black woman— present the case for American greatness, explaining how the Constitution of the United States demands that a president act within the bounds of the law and the bounds of moral behavior.

What the American public did not see was a lesbian.

Only the couple’s immediate circle of friends knew of their relationship, which was exactly how Jordan wanted it. Though the politics of civil rights, women’s rights, and LGBTQ rights was actively taking to the streets and pounding on the halls of government, Jordan saw her role in achieving these rights as broader than speaking for any particular movement.

Moreover, she believed that making her relationship with Earl public, in the still intolerant 1970s, would result in a media frenzy smothering her effectiveness in congress. In interviews of the period, Jordan never mentions her lesbianism, nor even her feminism, but describes herself as a “professional politician” interested in getting things done for her Texas district constituents and for the country.

To do that, she explained, she needed to “pursue the power points…. I knew if I were to get things done, [the congressional party leaders] would be the ones to help me.”

Jordan took heat from the activists, some even condemning her as not radical enough. But the brilliant congresswoman from Texas knew exactly what she was about. She learned not only to cultivate power and how to use it, but to embody it. Radical? Oh yeah. In the 1970s, a woman, a black woman, securing and using power in the American government was radical indeed.

By working with and through the power structure of congress, Jordan secured the support of her congressional colleagues, even gaining the backing of former president Lyndon Johnson, who helped her win a coveted seat on the Judiciary Committee. Carl Albert, then-Speaker of the House, appointed Jordan to a powerful spot on the Democratic Steering and Policy Committee, and in 1976 Jordan became the first African American woman to deliver the keynote address to the Democratic National Convention.

Not bad for a preacher’s daughter from Texas. And a lesbian.

We look back today, especially since the Stonewall uprising, and celebrate the rebels, the street demonstrators, the strikers, the public activists. But much like missing the forest for the trees, we sometimes overlook those working quietly in the center of the maelstrom.

We now know that Barbara Jordan was a lesbian; that she was in a lifelong relationship with Nancy Earl. We also know that this relationship gave her strength when fighting her devasting multiple sclerosis.