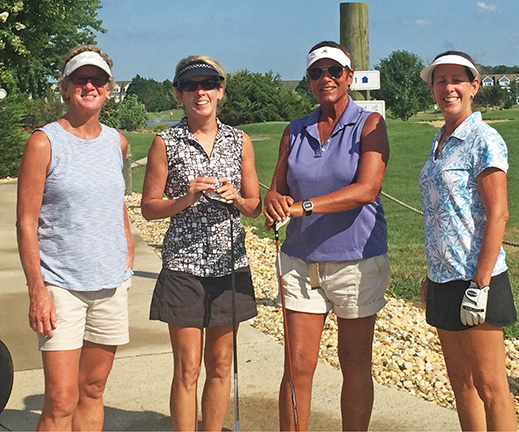 Seventeen years ago there were many women living in the Rehoboth area, yet they had few options for meeting each other. There were Friday night happy hours, or CAMP Rehoboth events, but what about other organized events?

CAMP Rehoboth knew there had to be lots of “sporty gals” in the area so a golf league was started at a local executive course (Heritage, now American Classic). The league played nine holes every Thursday evening throughout the summer. That first year (2002) the league was run by Judy Olsen and Joanne Kempton. Volunteer Norma Clark led the league the next year.

Then in 2004, Barb Thompson and Evie Simmons took over the league and moved the play to the Marsh Island Golf Course along Camp Arrowhead Road. The rest, as they say, is history.

The beauty of the CAMP golf league was the opportunity for women of all different backgrounds—and very different skill levels—to meet each other and have a great time together. Membership ranged from 60 to 120 members throughout the years.

The league was never intended to be a strict, competitive arena, but rather a social gathering where some minor competition took place. To encourage the social aspect of the league, most weeks the foursomes were arranged according to a random draw. Many times, players who were strangers to each other at the beginning of the evening became friends by the end of the round.

Barb and Evie made sure that the fun continued, all the way up to the season-ending brunch and awards ceremony. Not only did Barb announce all of the great accomplishments of the season (like one year when Fay Jacobs—yes, our own Fay—made her very first par ever on one of the holes), but Barb also, traditionally, had a new song parody each year for the whole gang to sing at the brunch. Here’s a particular favorite:

“Crazy” (apologies to Patsy and Willie)

Crazy, crazy for taking up golfing
I’m crazy, crazy for trying at all.
Who knew, you could swing as long as you wanted
And still, never, never hit that damn ball.
Practice—why do I let myself practice
Wonderin’ what do sane people do?
Crazy for thinking that I’d be a golfer
I’m crazy for trying, it’s just got me crying
These crazy greens got me so blue.

In addition to the golf league, Barb and Evie have shared their golf expertise at the annual Women’s FEST golf outing for over 14 years. They started in 2005 with teaching sessions in the convention center, then moved, in 2007, to a golf tournament at the Rookery. They also ran another tournament for 10 years, raising funds for CAMP Rehoboth, Metropolitan Community Church, and West Side Rehoboth.

I asked Barb and Evie about their fondest memories of the golf league and they both quickly brought up how grateful they were to Lana Warfield, their longest and most generous supporter for every event. Barb says she still thinks about the silly prizes awarded each year and how much the prizes were appreciated. Evie says she remembers Barb Hines, a.k.a. Ms. Congeniality, because she was always willing to move to another group of players if asked to welcome new players.

In 2017, after a lucky 13 seasons, Barb and Evie handed over leadership of the CAMP Rehoboth golf league to Donna Dolce. Because Marsh Island golf course closed, the league moved to American Classic Golf Club, just off Route One.

One Thursday evening, during the intense July heat wave, I spent some time with the league. Donna let me know that even after all these years, the welcoming spirit of the league remains the same. All skill levels are encouraged to participate, there is no intimidation or pressure, and the format is a shotgun, best ball scramble. The league currently has over 80 members and about 20 percent are beginning golfers. Lana Warfield continues her steadfast support of the league with weekly prizes and the league is still a great place to meet new people.

On that hot Thursday night, as the carts lined up to head out to the course, I talked to golfers Sharon Conover, Joanie Murphy, Susan DeCourcey, Pam Gustovich, Kathy Bostedo, Arletta Nicholl, and Mary Anderson. They echoed Donna’s opinion that the league is still a perfect place to meet new people and a great venue for fun and socializing.

The golfers risked heatstroke and thunderstorms that evening (98 degrees at 5 p.m.), but insisted it was worth it. As the golf carts drove off to their first tees, the players all said they were looking forward to happy hour in the cool clubhouse when they finished.

The CAMP Rehoboth Women’s Golf League meets every Thursday evening, mid-April through September. Play starts at 4:30 or 5 p.m., depending on the time of year. American Classic Golf Club is a par 64 executive course and the cost is $15 to walk or $20 with a cart. The league allows guests to play one time before joining. Interested? Contact Donna Dolce by calling CAMP Rehoboth at 302-227-5620.

Join the group, and head out to the links for a great time. ▼

Anita Pettitt is a former marketing executive and current small business owner in Rehoboth Beach and NJ. She’s played multiple sports all her life, but now concentrates primarily on her golf game.