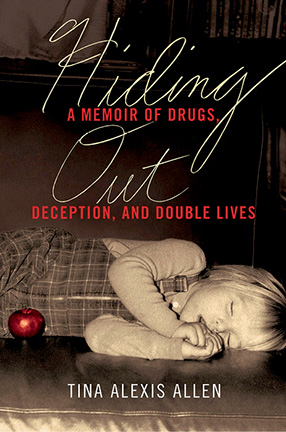 Hear that, and if you hadn’t hidden by then, hadn’t found a secret spot, you had a real chance of losing at Hide and Seek. Get out of sight, though, and you might’ve managed to sneak back home, ready to play another game. As in the memoir Hiding Out by Tina Alexis Allen, that game could last for decades.

Growing up, Christina Worthington knew her father hated her.

Her twelve siblings knew it, too, and they reminded her of it often: she was the youngest, her mother’s “lucky thirteen,” and the victim of much of her father’s wrath. Starting at about the age of nine, Tina was also the victim of sexual abuse from two of her then-adult brothers.

But she never told anyone about it. Instead, she acted out at school until the nuns were at their wits’ end and her “saint” of a mother was exasperated. At age eleven, a younger teacher finally took Tina under her wing—and into her bed.

Two years later, by the time her teacher-lover sent her away, Tina knew she was more attracted to girls than to boys. By her mid-teens, she had a college-age girlfriend who lived near her parents’ Washington D.C.-area house, from which she managed to mostly stay away; there was more comfort in the girlfriend’s apartment than there was at her childhood home, where hiding her real self was necessary.

But no one can hide forever.

When her father invited her and her girlfriend to lunch one day, Tina was guarded—and rightfully so, because he had figured out her secret and she couldn’t deny. Then he revealed a shocker of his own: he was gay, too.

Within weeks, Tina went from hated daughter to favorite; from ignored to invitee to her father’s dinners and clubs. They agreed to keep one another’s secrets from the rest of the family, partying, drinking, and doing drugs until the stress of it all bubbled over. Tina couldn’t take the lies anymore, and her lips spilled the truth.

Years later, there was one last secret.…

Memoirs, by their very nature, are generally focused inward, to a greater or lesser degree. Count Hiding Out on the latter side.

Starting with a raucous anecdote of sibling rivalry before Christmas Mass, you’re in for more than a look-at-me memoir. This is, in fact, a whole-family tale in which author Tina Alexis Allen puts the focus mainly on her parents, with sibs ringing the action as needed. Using that as a base, tales eke out tantalizingly slowly over the course of this book, and some are shocking, yet told so casually that you’ll get a “Wait. What?!” backlash. Don’t be surprised if you read the occasional sentence twice, in disbelief.

Add a tight window of time and a deep, unsubstantiated-rumor-type mystery that feels like a character unto itself, and you’ve got a compulsively readable book that is, at its close, very unique. If a memoir like Hiding Out is what you want for a long winter’s night, then get ready. ▼