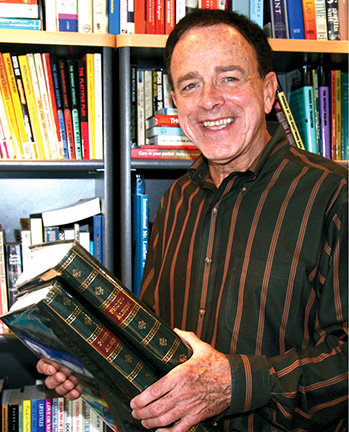 Tony Burns: The Storyteller of Rehoboth

The library is a small upstairs room at the CAMP Rehoboth Community Center. Look to the left for shelf after shelf of books lining the wall—a normal library sight. But look to the right for the real treasures: binder after binder, a hundred strong, fill the bookcases. Each binder holds dozens and dozens of visual stories about the history of Rehoboth. These are Tony Burns’ stories; these are his/stories. This is, in many ways, Tony Burns’ room.

Tony has been taking photographs of Rehoboth life since the late 1970s, including pictures of all kinds of people—US presidents, political candidates, and governors, as well as Rehoboth locals. He’s been the photographer and photo archivist for CAMP Rehoboth since its beginning over 25 years ago.

In those binders, there are over 30,000 photographs, most of them taken for CAMP Rehoboth, many of them used over the years in Letters. Tony’s eye on Rehoboth has created an amazing history of the town and the organization that changed it forever.

Rehoboth was a different place when Tony began chronicling it. Gays and lesbians, both singles and couples, were not readily accepted in the community. Murray Archibald and Steve Elkins began changing all that with the founding of CAMP Rehoboth and its mission: “Creating A More Positive” Rehoboth with “room for all.”
This mission is what drives Tony’s passion. CAMP Rehoboth’s push for diversity and inclusiveness fits in with Tony’s own vision: to document all parts of Rehoboth’s community, gay or straight. His goal is to connect to all of Rehoboth; to see Rehoboth as a community for everyone.

Letters is perhaps the most visible part of the CAMP Rehoboth operation, thanks in no small part to Tony’s contributions. While the magazine offers a lot of news and columns, it’s no secret that Tony’s CAMPshot photos are often what people turn to first. “Am I in CAMPshots?”

Tony works closely with Murray Archibald on each issue of Letters. The two sit together and comb through Tony’s latest shots to select the ones for printing. For CAMPshots, Tony is also the archivist, making sure he writes names and information on the back of each picture. This gives those who don’t possess Tony’s astounding memory a method for quickly identifying a shot. Murray and Tony comb through about 300 pictures for each issue.

Tony’s photographs tell thousands of stories, including some unusual tales. He says he sometimes feels like the Forrest Gump of photographers with all the interesting photo opportunities he has had.

He’d just arrived in Baltimore in 1965 to join the office of the Social Security Commissioner when Lyndon Johnson flew in by helicopter to sign the Medicare/Medicaid legislation. Having his camera with him (of course), he took a photo of the signing. He keeps that photo in his private collection.

Thanks to his work history in DC, he managed to snag a seat on stage at the second inauguration of Barack Obama. Seated a few chairs away was Delaware Governor Jack Markell, soon to be joined by Governors O’Malley of Maryland and Malloy of Connecticut. Governor Markell, who knows Tony, asked him what he was doing there. Tony said, “I’m here to take your picture!”

So, naturally, he got photos of all three governors. But the story doesn’t stop there. That same day, he also scored photographs of President Obama and his family, Hillary Clinton, and the Biden family—just as Vice President Biden was being sworn in.

That picture is particularly poignant, as the family photo included Beau, the son soon to be diagnosed with cancer, who passed away three years later. These photographs are dear to Tony’s heart.

When asked which of his photos give him the most satisfaction, Tony says they all hold something special. Whether snapping photos of the AIDS quilt, or a Vice President’s son, or a Rehoboth Beach party, Tony finds a way to bring people together. Like Forrest Gump, he seems to be everywhere, at all the events and parties, from Sundance to Drag Volleyball and beyond.

Check out his albums in the CAMP Rehoboth library. See the people, past and present, still here or sadly gone, and the events, still going or fond memories, along with the full spectrum of the folks who built this community.

Tony describes himself as a “social photographer.” But he’s so much more. He’s a Rehoboth legend. ▼