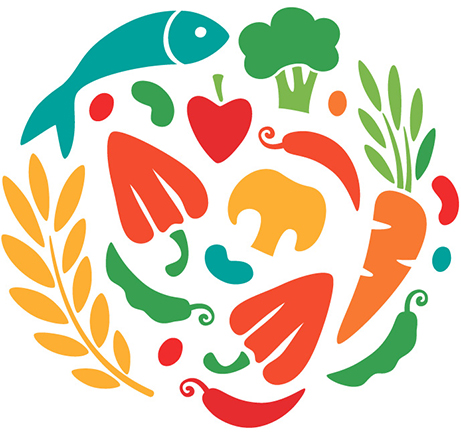 Buy Me Some Peanuts and Crackerjacks….

If you’re one of those folks who thinks funnel cakes, French fries, ice cream, and cotton candy are the four basic food groups—this column probably is not going to resonate with you. Nor will it if you worship at the altar of the dietary holy trinity: salt, butter, and sugar.

On the other hand, I’m not going to insist you grow your own, pick your own, ingest only certified organic foodstuffs, or adhere to a vegetarian diet.

I am, however, going to run through a few ideas for healthy eating. These derive from a variety of sources, including the US Department of Agriculture (USDA), Mayo Clinic, American Heart Association, and Michael Pollan (Food Rules and other books).

So: What to eat? Mr. Pollan has some useful, succinct advice: “Eat food. Not too much. Mainly plants.” Let’s see where that takes us.

Well—duh! But hold on: it may be you eat less actual food than you think. Do you consume lots of prepared foods? Especially ones that are highly processed?

Not that “processed” means “evil.” The USDA includes even such desirable features as washing, cleaning, chopping, pasteurizing, or cooking within its definition of “processing” food. Clearly, we all process food at home—and a good thing, too. Somehow those just-harvested carrots lack appeal if the dirt from which they were plucked still clings to them.

However, processing often goes well beyond the minimal level represented by, say, bagged spinach, cut veggies, or shelled/roasted nuts. As you slide down that slope, you move from:

→ Foods processed at their peak to lock-in nutritional value and freshness (e.g., canned tomatoes and frozen fruits and veggies), to
→ Those with ingredients added for flavor and texture (jarred pasta sauce, salad dressing, yogurt), to
→ Ready-to-eat foods (crackers, chips, and deli meat), finally arriving at
→ The most highly-processed foods, such as frozen pizzas and microwaveable dinners.

One way to find less-processed food? Shop the perimeter of the grocery. That’s typically where you’ll find the produce, dairy, meat/fish/poultry, frozen foods, and (be careful here) the bakery. And choose the least-processed foodstuffs available—e.g., the veggies and fruits that have been washed-and-cut, but not the fruit salad that comes complete with sugary syrup. Avoid the pre-marinated meat, the hotdogs, the sausages. Skip the frozen fish sticks in favor of filets. Take home a raw chicken v. a bag of processed tenders. Go with the pasteurized, calcium- and vitamin D-fortified milk, but not the cheese “spreads.” Try for freshly-baked whole-grain breads. Look for washed and cut frozen veggies and fruits without added salt, sugar, dressings, fats, or syrups.

When you have to make a foray into the aisles—after all, that’s where the canned tomatoes and spices and oils live—read labels! Ingredients are listed in order of quantity; for example, if “tomatoes” are listed first, then there are more tomatoes in that can than any other ingredient. Read closely—salt and sugar can go by many names. And trans fats are listed by names like “hydrogenated oil,” not as trans fats.

Perhaps surprisingly, you can’t just toss into your basket products which are labeled “organic” or “natural,” and assume you’re doing well by your body. Those words don’t equate to “good for you.” Honey (aka sugar), after all, is natural. So is salt. “Natural” means only that the product contains no artificial colors, flavors, or preservatives.

And “organic” covers a lot of territory, from a product that has met the USDA requirements which allow it to carry a USDA seal labeling it as “certified organic,” to one from a producer who makes less than $5,000 per year in sales from organic food, so is exempt from the USDA certification process. That small producer can still label her produce as “organic,” but cannot use the USDA organic seal.

By the way—products labeled as “free range” or “hormone-free” do not imply the producer adheres to organic certification requirements. They may—or may not. Look for the USDA organic seal on that free-range chicken, if organic is important to you.

There’s ample evidence (pardon the pun) that too many of us are failing to embrace this part of Mr. Pollan’s maxim. Per the results of a 2017 survey done in Delaware (in partnership with the CDC), 69 percent of Delawareans age 18 or older were overweight or obese. Nearly three-quarters of men (73 percent) were among those folks, as were almost two-thirds (64 percent) of women.

In the case of women, the statewide survey results were quite similar to the results of CAMP Rehoboth’s own 2017 survey, in which 63 percent of women reported they were overweight or obese. It was a very different story for the men, though: In the CAMP Rehoboth survey, a far lower percentage—41 percent—reported being overweight or obese. Way to go, guys! But still—41 percent? That’s a lot of men.

So—how much is “too much”? Specific numbers of servings of specific types of foods depend on the diet you’re following. If it’s the Mediterranean diet, you’ll aim for seven to 10 servings per day of fruit and vegetables, eat fish twice per week, and almost always substitute (more) fish, poultry, or beans for red meat. You’ll opt for whole grains, enjoy some dairy—such as low-fat yogurt and small amounts of cheese—and use healthy fats, such as olive oil.

If you’re a vegetarian, then Loma Linda University’s food pyramid is helpful in achieving a healthy balance, meanwhile getting the nutrients you need. It calls for five to 12 servings of whole grains per day, one to three servings of legumes and soy, three to four of fruits, six to nine of veggies, and one to two servings of nuts and seeds.

You get the idea: “too much” is way less than we’d thought (or hoped) it was.

As to the final part of Mr. Pollan’s advice: He didn’t say “only plants.” He leaves room for some meat, fish, poultry, and eggs. He does that for a reason: It can be hard to get all your essential nutrients from a diet lacking those ready sources of protein. And, some of us just like the occasional steak or drumstick or crab or omelet. For those of us who are still eating those things—a serving is about the size of a deck of cards. One egg is a serving.

Less-restrictive vegetarians—e.g., some eat fish; some are fine with eggs and dairy; others are okay with eggs or dairy—have a somewhat easier time finding and consuming sufficient nutrients. Vegans—who avoid meat, fish, poultry, eggs, dairy products, and even foods which contain eggs or dairy—will have to work the hardest. Calcium-enriched and fortified products—e.g., soy products, juices, and cereals—are one source; supplements are another, if diet alone doesn’t provide sufficient quantities of these essential elements.

Pretty much every food pyramid recognizes the need for an occasional indulgence. At the pointy little tip, there’s a mention of “sugars” or “sweets.” True, it usually includes mention of (or at least implies) zero daily servings. But zero daily does not have to be read as zero weekly or monthly or annually. So enjoy that corn dog! Savor that sundae! Just recognize these for what they are: treats. Not (sad to say) dietary staples. Bon appétit! ▼

Marj Shannon is an epidemiologist and wordsmith who has devoted her life to minutiae. She reports that yes, the devils are in the details. Aren’t they always?