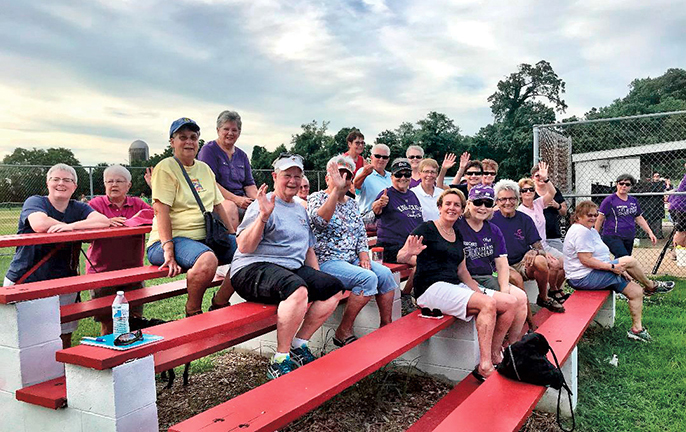 (They just wear lots of braces and get younger players to run for them!)

Where can you find softball players of a certain age (45+) still competing and having a great time in Rehoboth? The answer is the Little League fields on Holland Glade Road, behind the outlets.

The league does have some very specific rules to ensure safety of the players. Each team can have 20 players on their roster and they can play 11 in the field (yes, 11; five in the outfield). The team can bat all 20 players and there are special safety bases at first base and home plate to help avoid collisions. There is a five-run rule limit each inning, and if after five innings a team is ahead by 12 or more runs, the game is over.

This past Tuesday, the Shore Sharks played against Revelation Rip Tide on field three. The Sharks’ manager, Deb Qualey, said she credits her assistant coaches, Cathy Benson, Mel Pereira, Ruth Silvis, and Gail Tannenbaum, and scorekeeper Evie Simmons, with the team’s success over the years. They have had winning records most years and have taken first place for two years in a row.

Rina Pellegrini, the league commissioner, plays for the Sharks, and is always available to help new players join this league. The Sharks have loyal fans like Joanne Yurik, Vicky Martina, and Susan Jimenez, who show up every week and cheer for their team. The Sharks’ sponsor is Olivia Travel and Linda Kemp of Olivia makes it to most games.

The first inning saw the Shore Sharks take control of the game by scoring four runs and leaving two runners on base. Then, Isabelle Ortiz took over on the mound for the Sharks and delivered some outstanding pitching, shutting down the Diamonds with called third strikes.

As the game progressed, the Sharks continued scoring most innings, with a solo home run by Jaimee Sheaffer which sailed over the fence to the accompaniment of cheering fans and teammates. The final score was Sharks 12 and Riptide 4.

On field two, manager Dottie Pope gave her team, the Delaware Diamonds, a pep talk. She has 15 players on her roster, ranging in age from 48 to 77 years. She has two great assistant coaches, Dee Pecora and Barb Sweeney, who help with all aspects of team management. The scorekeeper is Karen Dorris, whose wife, Deb, plays for the team.

Dottie says she has some of the most dedicated players on her team. One player travels to Rehoboth from Wilmington each Tuesday, barely making it in time for the first pitch, and one player travels from Dover for all games and practices.

On other fields, the Blue Herons held batting practice. The Blue Herons tied for first place last year and then went on to win a statewide tournament. The Blue Herons are managed and coached by Sharon Kanter, who is in her sixth season with this team.

Sharon says the first few years were a little trying, but once they found their great pitcher, they have been winning ever since. They have 17 women on their roster, ranging in age from 50 to 77 years. Sharon loves the excitement of being out on the field and watching women have a great time.

And let’s not forget about the umpires: Tony DeFazio, Rob Kern, and Debbie Hauth show up every Tuesday and make all the calls. These dedicated officials do it for the love of the game (because it certainly isn’t for the “big pay”).

So, if you’re new to the area or have been around a while but haven’t explored senior women’s softball at the beach, come on by to watch or play. Head out to the fields and talk to Rina, Sharon, Deb, or any of the other great women who play every Tuesday. You’ll find friendly women who, regardless of age, still love to compete on the softball diamond. ▼