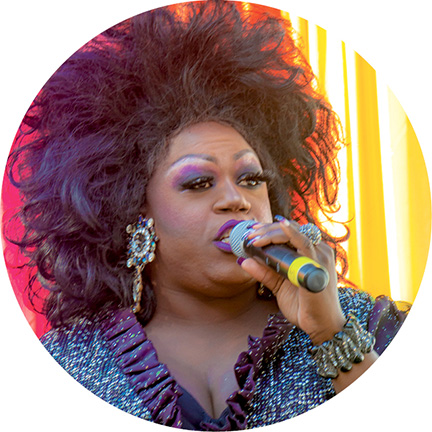 Interview with the Diva

Have you ever wondered what your drag name would be if it were you up on the stage and lip synching for your life? C’mon, tell the truth. I’ll admit I have. Using the tried and true method of combining my first dog’s name and the street I lived on, my drag name would be Miss JoJo Galway.

Do drag queens really pick a name that way? Well child, Blue Moon diva Roxy Overbrooke is living proof that the dog/street methodology is not an urban myth. I heard it straight from her lips one evening when I had the pleasure of chatting her up while she was getting dolled up to host Drag Karaoke at the Blue Moon.

As it was told to me, a young Charles Bounds from Salisbury, Maryland, was entering his first official drag pageant. He had the perfect outfit but hadn’t settled upon the ideal name for his drag persona. The clock was ticking. Need being the mother of invention, Charles simply combined Roxy, the name of his family’s teacup Yorkie, with the street where he grew up. Voila. A star was born.

As the theme of this issue of Letters is “Heroes,” and with it being the 50th anniversary of Stonewall, I thought it a perfect time to show our boys in drag some appreciation. So without further ado, here’s more from my chat with Miss Roxy Overbrooke, one of the hardest working divas of Rehoboth.

I’m a big fan of your style. To whom does Roxy look for her drag inspiration?

My style is definitely old school: a beautiful gown, a big wig, and fabulous jewelry. Then I get on stage and belt out a song by one of the divas I admire. I study the words, the moves, and the styles of Whitney Houston, Aretha Franklin, Patti Labelle, Billie Holliday, and Ella Fitzgerald. Of course, I keep up with what’s current in music and pop culture because as a drag queen you have to. But I’m definitely a “gown girl.”

Tell our readers about your journey to becoming a professional entertainer.

As a boy in Salisbury, I sang in church and in the school choir. I also studied music in college. When it comes to hair and makeup, I’m self-taught. I’d sit and watch my grandmother, mother, and aunties when they were dressing up. I studied magazine photos and I watched movies. Then in high school, I started doing all my girlfriends’ hair. Deep down, I’ve always been a performer. When I was young, I’d direct and star in neighborhood shows I staged on my mother’s front porch.

Finally, I put it all together and started doing drag officially. That was back in 2007. My first performance at the Blue Moon was two years later when Bump, the gay and lesbian travel and lifestyle TV series, featured Rehoboth Beach and the drag show at the Blue Moon. I’ve been here since and I feel blessed to do what I love professionally, full-time, for an establishment with such a strong commitment to entertainment.

And in these times we live, we sure need some entertainment. Drag has always been about pushing boundaries and turning society’s rules upside down. But it’s also about suspending time and helping people escape the madness going on in the world.

Speaking of time, how long does it take to transform Charles into Roxy?

About two hours. Makeup takes the longest time. For hair, I usually combine two or three wigs because I believe bigger is better. My costume is quite complicated with tights, a body suit, breast forms, and a gown. During the weekend shows, I’ll do up to four costume changes. Each look takes about 15 minutes to put on so I have to move fast.

What does Roxy do when she’s not performing?

She likes a cocktail! One Rose Kennedy please!

Seriously, though, I have a great group of friends. We go to the beach and out to eat. Rehoboth has so many good restaurants and the people here are extremely nice and friendly to socialize with.

I chill out by watching TV. I’m currently obsessed with Pose. The producers and actors do a great job of bringing New York’s underground drag ball history to life through great story lines, costume, and dialogue. I especially like the actor Billy Porter, who emcees the balls. I’ve been following his career for quite awhile. That gown he wore to the Emmys was flawless. Don’t laugh, but I also like 90s sitcoms, especially A Different World, Golden Girls, Living Single, and Will and Grace.

Any final words of wisdom?

Find what you love to do and then commit to getting better at it each and every day. ▼