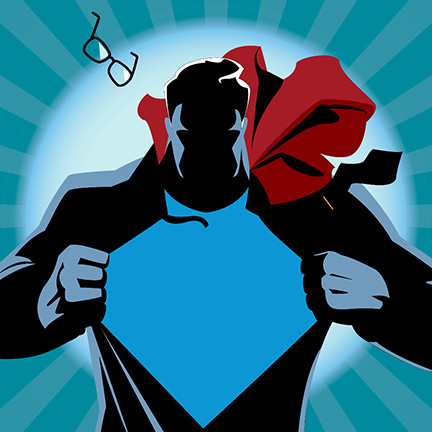 A Love Affair with Superman

After a long day at work, I go home, cook dinner, clean up, and do my best to tune out the world for a brief time before going to bed. Movies are the best escape.

Superhero movies are the best of the best.

Modern moviemakers work from an impressive toolbox of technology, art, science, talent, and money to bring these one-dimensional characters to life on the big screen.

None of us will ever fly through the sky on our own power, have x-ray vision, shoot lasers from our eyes, or travel through time. We understand that. We still discover ourselves within these imaginative alternate universes.

In superhero movies, the line between good and evil is never as clearly defined as we might think it would be. The real story is about how they got to be good or evil—hero or villain—and what they choose to do with their powers once they have them.

All the great comic book characters face the same complexities that make life difficult for us. They love, and laugh, and suffer rejection and loss. Some are treated as outcasts and are forced to hide their identities from the world.

Truth. These days we have all been left scrambling to find truth in the world around us. Distorted by the evils of political polarization and manipulation, by racism, sexism, and homophobia, by economic inequalities, and by the rise of hate groups spreading propaganda with the blessing of our leaders, is it any wonder we can’t tell hero from villain anymore?

Is it any wonder the world feels more comic book than real life?

“Truth, justice, and the American way,” is the catchphrase associated with Superman—especially in the earlier incarnations of that immensely popular character.

Now it sounds old-fashioned, and I wonder what it even means.

We all have a superpower of some kind.

Understanding what it is and how to use it is up to us to decide.

In the aftermath of Steve’s death, my sister, Mary Beth Ramsey, and my “other” sister and dear friend, Sondra Arkin, swooped in to rescue me. Moving with purpose and vision, they put their own superpowers to good use reinventing the production of Letters from CAMP Rehoboth.

I was paralyzed. They had wings.

Heroes come to us in unexpected ways. Sometimes in the small words of encouragement from a mentor, friend, or even a stranger we pass in the street. Sometimes in the sacrifices made by those who love us, or the bold actions of activists fighting for social justice and equality.

Masked warriors known to us only by the outcomes of their efforts to make our world a better place.

From my vantage point in the heart of CAMP Rehoboth, I have been gifted to witness the extraordinary words and actions of the people of our community. Some lead, some teach, others encourage, or use their creativity to find solutions to the problems we face every day.

In each issue of Letters from CAMP Rehoboth, we recognize the volunteers who gave up their time and skills during that period. Their superpowers are many. Their hearts are strong.

My local heroes give freely of their time, resources, and superpowers to make the world a better place. People like Reber Whitner and his amazing food rescue team. Charlotte King and the leadership of the Southern Delaware Alliance for Racial Justice. Doug Yetter, whose musical superpowers and creativity are legendary in our community. Delaware transgender activist Sarah McBride, the first openly transgender person to address a major party convention (and now running for public office in Delaware). My dear friend, the Rev. Jonathan Baker, whose work set the stage for Epworth United Methodist Church to become the open, welcoming, and reconciling congregation it is today—and for his continuing efforts in Africa.

I could go on and on.

Like the mutants in Marvel’s X-men series, invisible heroes are all around us.

For years before his death, Steve kept a quote in our office. I don’t know where it originated or even if I am remembering it correctly, but it went something like this. “You can accomplish anything you want if you don’t care who gets the credit.”

Graffiti artist and political activist Banksy says: “I don’t know why people are so keen to put the details of their private life in public; they forget that invisibility is a superpower.”

Don’t talk about it. Just do it.

The choice for each one of us is simple. What do we do best? How do we use it to help others?

And oh yes, I have one more choice to make. Do I want to be rescued by Superman, Thor, or Captain America? Hmmmmm? Three more reasons to love superhero movies! Can I choose all of the above? ▼