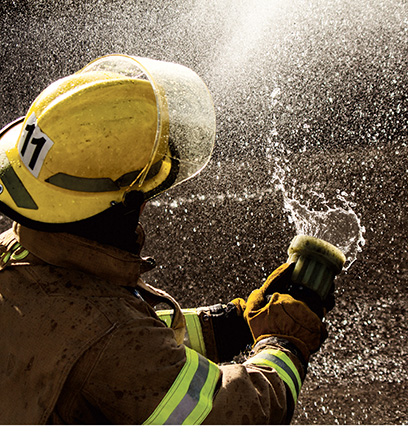 I Call Them Heroes

The fire team expertly lowers the ladder to the edge of the roof. An intrepid firefighter scales the rungs with the skill of a veteran. A crowd has gathered on the ground below. The victim is scared, which makes the firefighter’s task even more difficult. But he is somehow able to grab hold of the frightened one. With a firm grip, he makes it down the ladder into the crowd below. Captain John Meng is congratulated by colleagues and neighbors.

The dog is safe and sound.

No, really. A dog was trapped on a roof, of all places. How it got there is fodder for another story. But Meng and his brothers and sisters from the Rehoboth Beach Fire Department were there, as they always are, to serve and protect their community.

And serve and protect they do. Rehoboth’s stations, along with their counterparts in Lewes, have answered around 600 fire calls and 3,700 emergency medical services (EMS) calls during just the first six months of this year.

But for every call that ends up with a cat saved, or a bird (another story for later), there are hundreds of calls that involve more dangerous situations. The majority of firefighters at each station are volunteers (most have pagers and are at home when a call comes in), so they are often called in the middle of a family dinner or playtime with the kids to answer a call.

And when they do answer, they must always be ready for the worst, or as Deputy Chief Jason Stadler of the Lewes Volunteer Fire Department puts it, “a building is always occupied until proven otherwise.”

Between answering calls, performing administrative work, and undergoing continuous training, life in a fire station is a huge time commitment. Adding to the stress is the need to be prepared for any situation, often not knowing the extent of the danger or damage until arriving on the scene. That and the possibility of a bad outcome (injuries, even death) is a huge burden for these brave men and women to bear.

How do they do it? Any firefighter will echo these three words: camaraderie, training, and training. Camaraderie, as in feeling part of a team, knowing everybody has your back. Training, as in feeling prepared. Each firefighter undergoes training on the basics of firefighting as well as how to deal with the stress of responding to traumatic calls. Each station also trains as a company, with all firefighters getting the same training so they can help each other in the heat (often, literally) of the moment. Because of their training, thankfully, injury or death doesn’t happen very often on their fire calls.

Did you know that Gumboro has no fire hydrants? I didn’t even know there was a Gumboro…but the team does.

And there are many good outcomes. Firefighter Kent Swarts of the Rehoboth station recalls a Rehoboth fire which saw two houses ablaze and threatened the houses on either side of them. The team was able to save those two houses and the grateful owners threw them a party.

As I sat at the firehouse on Rehoboth Avenue, I was surprised to hear how many times passersby took a minute to thank the firefighters for what they do.

Then, there are the EMS teams, who deal with advanced life support calls all the time. Heart attacks happen every day in the Rehoboth-Lewes area, but due to advanced technology, quick response, and superior training, there are a lot of good outcomes.

The big question I asked is, why do these first responders do this job? Each firefighter has his or her own motivation (some pass the torch from parent to child for generations), but there are many reasons people put their lives on the line for their community.

One firefighter told me “people who call are having a bad day” and what better way to give something back to them? Others like “being the good guy.” Another smiled and put it best: “Who doesn’t love a firefighter?”

Full disclosure: I was able to tour a firehouse for this article, wanting no more than to see an actual fire pole and stand next to a huge hook and ladder truck. As the proud owner of a Tonka fire engine as a child, I was enthralled. So yes, I too love firefighters!

It’s funny. When we think of the word “hero,” many of us immediately come up with firefighter or ambulance crew. But no firefighter I spoke to in Rehoboth or in Lewes claimed the word hero. The closest some of them would come was to admit they like kids looking up to them and that their example of service to the community can provide a positive direction for kids. I’d say that in itself is the definition of a hero.

The Rehoboth and Lewes Fire Departments are funded primarily by donors like you. There is a fundraiser for the Rehoboth station at Diego’s July 28, 3-8 p.m. Keep a look-out for more events in the future! ▼