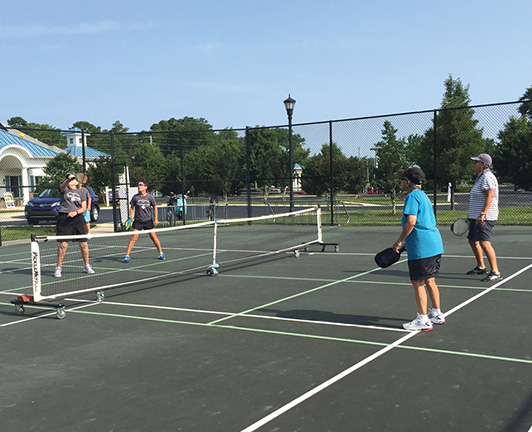 What sport has a food item in its name, has the “kitchen” for a penalty area, and is played on half of a regulation tennis court?  Yes, it’s pickleball, and many local women who have played other sports are now taking up pickleball and loving it.

How did this popular sport get started? Here’s the story according to the USA Pickleball Association (USAPA). After playing golf one summer Saturday, Joel Pritchard, congressman from Washington State, and Bill Bell, successful businessman, returned to Pritchard’s home near Seattle to find their families sitting around with nothing to do.

The property had an old badminton court so Pritchard and Bell looked for some badminton equipment and could not find a full set of rackets. They improvised and started playing with ping-pong paddles and a perforated plastic ball.

The following weekend, a colleague, Barney McCallum, was introduced to the game at Pritchard’s home. Soon, the three men created rules, relying heavily on badminton. They kept in mind the original purpose, which was to provide a game that the whole family could play together.

Okay, so what’s with the crazy name?  There are many stories, but the originators insist that the name comes from their dog, Pickles, who would always chase the balls.

But the real news is that pickleball has become the fastest growing sport in the USA, growing internationally as well. In the US, there are over 2,000 places to play competitive pickleball, and most community centers and senior centers have pickleball courts for recreational players.

I went to one of our local communities (Sawgrass South, off Old Landing Road) to watch some local women play, and there I found one of our pickleball ambassadors, Sandy Oropel. She explained a lot about how pickleball took hold locally.

Sandy started playing pickleball seven years ago, while on vacation in Palm Springs, California. She was so excited about the sport she brought two paddles and six balls home to her wife, Linda, as a souvenir.

“What, no typical T-shirt this year?” was Linda’s response. Nope, instead of a T-shirt, Sandy got a small group of former physical education (PE) teachers together (what a surprise, finding former PE teachers retired in our area!), and they soon had 40 women completely addicted to pickleball.

From there, Sandy formed the Sawgrass Women’s Pickleball Club, which plays twice a week outdoors from May-October, and indoors at The Factory in Lewes every Tuesday during the winter. The club has become both a sport and a social club raising funds for various organizations like Delaware Senior Olympics, Epworth Food Bank, and other local charities.

Sandy, and other local pickleball ambassadors, promote the game locally and conduct clinics at various communities and country clubs. Sandy has also coordinated the pickleball tournament for CAMP Rehoboth Women’s FEST each year. She participates in many statewide events run by the First State Pickleball Club (firststatepickleball.org) and helps coordinate events for the Delaware Senior Olympics.

While at Sawgrass, I watched women of all ages, sizes, and athletic ability play this fun game and get some great exercise. On court 1, Chris Ligato and Margo Orland played against Tama Viola and Linda Defeo. It looked like Tama and Linda had the game locked up, until Chris and Margo came back with a big rally to win.

Over on court 2, Susie Jernberg and Dottie Pope took on Sally Chamberlain and Yona Zucker.  Dottie is new to the game but has learned how to hit her serves deep and get up to the net quickly. Sally and Yona staged a big comeback though and finally won, 11 to nine.

The “Jersey Girls,” Sandy Oropel and Margo Orland, then took over on court 2, playing against Julie Ilg and Tama Viola. It looked like it was going to be an even match, until Sandy and Margo stormed through six straight points and won nine to one.

The game is usually played until 11 points, but the group changed the game to nine points, so more people would get to play.

For me, it was a lot of fun to watch, but I’m told it’s even more fun to play—bordering on addictive. According to the players, it’s an easy game to learn, especially for players with any paddle/racquet sports experience.

In addition to the clinics Sandy provides, Pickleball 101 is offered at The Factory, Sports at the Beach, and the Dave Marshall Center.

Come out and cheer for the players or give it a try.▼

Anita Pettitt is a former marketing executive and current small business owner in Rehoboth and NJ. She’s played multiple sports all her life, but now concentrates primarily on her golf game.