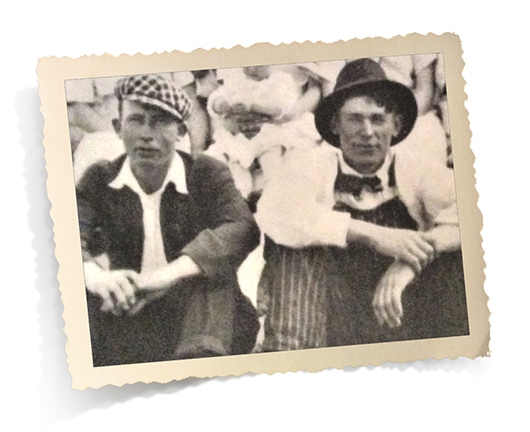 The 50th anniversary of the Stonewall Riots got me thinking about the year that changed America—1969. I was 12, Nixon was president, Eisenhower was dead, MLK and RFK’s assassins were behind bars, Neil Armstrong took one small step for mankind, and Teddy Kennedy took one giant wrong turn off a bridge. Walter Cronkite gave us the facts about riots on college campuses and in the streets, the casualties in Vietnam, the free love at Woodstock, the Manson Family, the Zodiac Killer, My Lai, the Chicago Eight, the Black Panthers…. 1969 was also the year I noticed how well Robert Conrad’s pants fit on The Wild, Wild West.

In the midst of protest and puberty, there was one unerring constant—the annual pilgrimage to South Dakota to visit my greatgrandparents and assorted Scandinavians.

These sojourns brought no surprises. Grandma Minnie would have a roast in the oven—fresh from Uncle Lloyd’s farm—and lemon meringue pie for dessert. The next day we’d drive to Aunt Pearl’s house in Carpenter where we’d be joined by Uncles Tommy and Oscar and have a nearly identical meal. At least one evening would be spent with Grandpa Emil narrating slides of last winter’s travels. Our visits were always planned to coincide with the State Fair— and became the one day of the trip I dreaded. The heat, the dust, the smell…but that summer the fair became strangely bearable. I’d never before noticed how well the cowboys’ jeans fit in this part of the wild, wild west.

Grandma Minnie was fifth of nine siblings, Tommy being the oldest, Oscar the youngest boy, and Pearl was the baby. Tommy and Oscar were the embodiment of the Norwegian bachelor farmer. The boys had remained with their mother after all six sisters married and moved away. As the only two boys, they had always shared a bedroom, and continued to do so even when there were four empty bedrooms in the house. After their mother died, they decided to leave the hustle and bustle of Willow Lake (population: 435) and move next door to Pearl in Carpenter (population: 50) where they shared their little three-room farmhouse and one big feather bed. While Minnie and Emil loved to travel the lower 48, Tommy and Oscar never ventured more than 50 miles from Carpenter. Ever. Oscar joked that, “As long as Emil shows us his slides, there’s no reason to bother traveling!”

The awakening I had that summer eventually led to the demolition of my closet in the summer of ‘73, which led to my mother having me institutionalized. While I was locked up at “the funny farm,” the rest of my family visited the family farms. Mother went to great lengths to notify absolutely every relative about my “unfortunate lifestyle choice” and proclaim that by summer’s end I’d be “back to normal!” Uncle Lloyd told her his son Roger moved to Hollywood and met “a nice young feller” who worked at CBS, and he thought that was good, since Roger had always been so miserable on the farm. Roger and his feller both died a few years later, and Lloyd cried about that every day for the rest of his life.

Shortly after Tommy passed, I made my last visit to Carpenter. On the drive to Pearl’s, Grandma Minnie put her hand on my shoulder, looked straight ahead and said, “A lot of the town gossips said Tommy and Oscar were…sissy boys…but I love my brothers, I love you, and that’s all that matters.”

We were barely out of the car when Pearl hollered that Oscar needed my help in the garden. I rounded the corner sporting a fashionable tan jumpsuit, and saw Oscar pulling carrots and kohlrabi wearing the same Sears overalls and John Deere cap he always wore. He turned, threw those stocky arms around me, then pulled back and chuckled, “Since when are you taller than me?” I watched those ice blue eyes as they began to well with tears. Oscar buried his head in my chest and sobbed, “I wish Tommy was here to see you all growed up. Oh, Doug…what am I gonna do without my Tommy?” I held him and just let him cry. He slowly let go, pulled out his handkerchief, wiped his nose, and muttered, “Grab that pail. I need to clean up before supper.”

How different their lives may have turned out had they been born 50 years later. They might have travelled, or shown off their collection of vintage glassware to similarly inclined bachelor farmers, or driven to Iowa to campaign for Mayor Pete. Perhaps the three of us would have gone to the fair and discussed whose pants fit the best. ▼