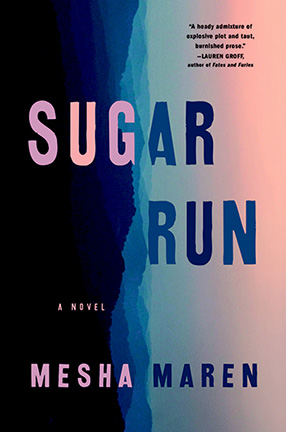 It It was right where you left it.

Nothing had been moved, or altered. Things had stayed the same and whatever you were looking for was right where you left it. That goes for keys, eyeglasses, coffee cup, and in the new book Sugar Run by Mesha Maren, it could also include a life.

But there she was, ready to leave after only eighteen years inside Jaxton Prison, a ticket in her hand and four hundred dollars borrowed from her brothers. Jodi McCarty was going home to West Virginia.

But first, she had to find Ricky. He was in Georgia, and she had time.

Ricky was Paula’s brother—Paula being Jodi’s lover and the woman she killed—and it had always been Paula’s dream to get him far away from their abusive father. Jodi knew that was something she had to do now, so she headed to Chaunceloraine before re-starting her life on her grandmother’s farm.

And in her search for Ricky, Jodi found Miranda.

When Miranda left her husband, she really only wanted attention but she got a surprise instead: he took their three boys and left her with no money. She had no home, either, so she was staying at the run-down motel near where Jodi had landed. Half-drunk one night, she ended up in Jodi’s room—and she stayed.

Days before her first meeting with a parole officer in West Virginia, Jodi gathered Miranda and the boys she’d helped steal back and she headed home, having talked Ricky into leaving with her. Jodi loved Miranda, and the cabin where she’d grown up was a good place to raise kids. It was in rough shape, but it was home.

But, as it turned out, it was someone else’s home: the land was sold for back taxes while Jodi was in prison, and frac sand miners were buying up the area. Jodi didn’t know what to do and, as the pressure to care for her makeshift little family grew, she realized that she didn’t know Ricky or Miranda very well, either….

With the slam of a door, Sugar Run starts out with a stunned shiver and it sprints. Author Mesha Maren perfectly captures the surrealness of being snatched from an unwanted reality and hurled into one that doesn’t make sense. Even if you’ve only just driven past a prison, you’ll know the crush of it.

Back and forth the story goes, as we learn what happened when Jodi was just seventeen years old. That’s a mandatory part of the tale and it’s also, sadly, the cause of some disorientation since things begin to unravel as it’s populated with more and more people. Readers are rewarded with a gauzy, delicate ending but the last dozen pages make it tough getting there.

And that’s too bad, since there’re more positive things to say about this book overall than not. Try Sugar Run, linger, and you might love it but beware: you might also just as soon wish you’d left it. ▼