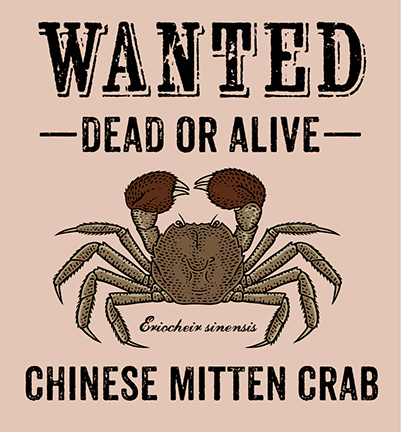 If you are a true-blue crab aficionado, chances are you’ve been coming to Rehoboth and indulging your inner foodie by buying a roll of brown paper, some small wood mallets, and a bushel or two of jumbo blues.

But did you know there’s a whole host of other crabs, many of them vitally important to the health of our shoreline, some of them cute, some of them entertaining, and some of them threatening to all we hold near and dear about our bays?

And some of them are frauds. Imposters. We call them crabs, but they’re not.

True crabs are part of the Brachyura order, and the most advanced crustaceans in terms of body shape—wide, flat, and short—and the most modified from their primitive, shrimp-like ancestors.

So the first crab on the list—those adorable, spot-them-at-shops-everywhere, hermit crabs. Not only are they not “true crabs,” the hermits aren’t even local to us.

They’re imports, just like so many other beach souvenirs.

But hey, let’s not quibble. Let’s scuttle and crab-walk our way down to the water.

The waves crash, our toes dig in, and we make contact with another poser, the sand crab. And while not necessarily a “true crab,” sand crabs are definitely world-class burrowers. Their daily routine is to get rolled up by the waves, frantically dig back under the sand, and repeat. They can bury themselves in 1.5 seconds. Which is rather remarkable as sand crabs cannot move forward or sideways, only backwards. They actually have no functional legs with which to navigate our next destination—the beach.

The beach is where my personal favorite “true crab,” the ghost crab, lives the hard-knock life. Ghost crabs are the only true crabs to call the local sandy beach home.

They are those milky-colored, translucent, rectangular, two-inch boxy bodies on “legs,” with large, buggy eyes—eyes which give them a 360 degree vision, but no overhead. They can run forward, backward, and sideways, using their legs to gear up to an impressive 10 miles per hour. And one last thing: their pincers mean business. They crush their food to eat, and will gladly test your finger for its edibility.

Next, it’s off the beach, heading to the inland bays, for another fun “true crab,” the fiddler crab. Fiddlers are actually assets to our wetlands, burrowing in and using their dining habits to sift through the sediment and aerate the wetlands.

It’s easy to spot a male fiddler. He would be the crab with the over-sized, fiddle-shaped claw which, in the world of fiddlers, is key—turns out, the bigger the claw, the sexier the crab. And in a true Delmarvelous nature moment, if a male fiddler loses his claw, the other claw will grow to replace the fiddle and the empty claw will grow a new small claw. Fiddle on that as we continue on to the muck.

It’s the muck where spider crabs rise up like a scene from an alien sci-fi movie. In addition, you might have a close encounter with any one of five species of mud crab if you play “flip a rock” during low tide. There are also two types of cancer crabs if you’re a winter beach walker (the rock crabs make their home on our jetties; the stone crabs on the edge of our continental shelf). And now, we cue the scary music….

It’s time for the bio-invaders: the green crab, the Asian shore crab, and now, most deadly of all, the Chinese mitten crab. The Chinese mitten crab spawns in saltwater, lives in fresh water, and travels between the two simply by getting out and walking around. And one female mitten crab can produce 250,000 to 1 million eggs per brood.

These crabs are nearly as big as our native blue crabs, but make burrows so large they can cause levees to collapse. Think what would happen with our own Broadkill River if the banks were to slump!

If by chance you are (un)lucky enough to catch a mitten crab in a net, a trap, or anywhere else, don’t throw it back alive.

Remember, only we can protect our environment and keep our Delmarvelous crabs blue! ▼

Stefani Deoul is a television producer and author of the award-winning YA mystery series Sid Rubin Silicon Alley Adventures, with On a LARP and Zero Sum Game. Zero Sum Game has just been named the Delaware YA Book of the Year!