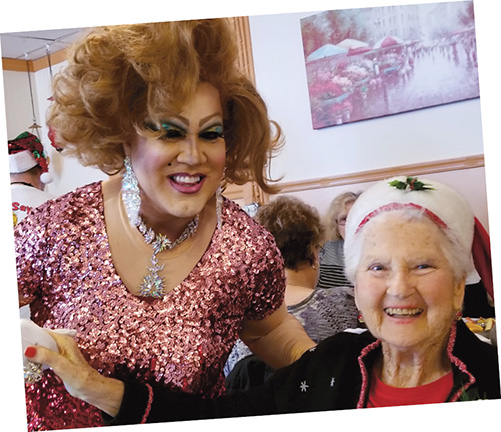 It’s a Drag (Brunch) at Goolee’s

I haven’t had so much fun over bacon and eggs, well, ever.

Goolee’s Grill, at the corner of Wilmington Avenue and First Street (next to The Pond), has been serving up hearty, diner-style breakfasts since 2014. And about a year ago, they started coloring outside the lines with a new tradition: the Goolee’s Drag Brunch.

One Sunday a month, the restaurant opens around noon, with the dining room reconfigured with tables and chairs ringing the room so they can host a performance area in the center.

Brunch-goers are offered a menu with selections like bacon and eggs, French toast and the like, plus endless bloody marys or mimosas. The food is tasty and the libations quickly add to the fun.

From the minute we walked in, escorted by Regina Cox in full Ruby the Waitress regalia, the fun began. With the sound system pumping out the Streisand /Donna Summer disco tune “Enough is Enough,” and the servers scurrying to provide the cocktails, it was clear we were in for an entertaining time.

Prior to the show, Goolee’s owner George came around with wads of dollar bills in case patrons needed change for the ceremonial tipping of the performers. All the while, we got to know the diners surrounding us and got ready for the festivities.

But it’s the performers, local drag queens known for their late-night shows in town, who brave the daylight hours at Goolee’s to provide an endearing and hilarious show. Their lip sync talents rock, their routines are stellar, and let’s face it, the costumes take your breath away.

The show I saw featured Regina Cox, Monique L’Amoure, Cece Alexander, and Fancie P. Charmington, and since it was the Christmas show, everyone jingled and donned their gay apparel. Between the holiday songs, disco favorites, and some special material, it was a heck of a breakfast.

As for the regular Goolee’s menu, the breakfasts feature coconut and pineapple waffles, French toast stuffed with cream cheese and topped with strawberries, a variety of classic egg dishes and omelets, and much more. With the influence of George’s Greek heritage, there’s a gyro omelet and often Goolie’s offers an entire night of Greek specialties.

And, for shoppers, there’s a Goolee’s Gift Shop attached to the restaurant. They have jewelry and all manner of gift items, many of which are Rehoboth-centric and great fun.

Goolee’s is open for breakfast and lunch and the occasional specialty dinner. The prices are quite reasonable and it’s well worth a visit anytime—but you really ought to check out the monthly Drag Brunch. It’s so very Rehoboth! ▼