Did you see last year’s adorable gay teen comedy, Love, Simon? It was the John Hughes movie John Hughes never got around to making, and its sleeper hit box office status and devoted fan base of The Youngs was crying out for a small screen adaptation.

So the executive producers of This Is Us, Isaac Aptaker and Elizabeth Berger, who wrote the film, are developing the series version for Disney+, the Mouse’s new streaming channel that launches later this year.

There’s no cast yet, and it’s unknown if the series will revisit the plot of the film—closeted gay teenage boy with a crush on a close friend has to come out and risk it all—or if it’ll pick up at the movie’s happy ending and move forward from there. But we don’t care. We’re ready. It was time for an all-queer DeGrassi, and this could be the fulfillment of that obvious and clear gap in the TV content market. ▼

Grease Is the Word Again

Grease, that stupendously successful film musical of 1978 that people still adore, was truly one of the gayest pop culture products of that decade. It was, after all, masterminded by one of Hollywood’s legendary queens, Allan Carr—see the wild documentary about his life and work, The Fabulous Allan Carr, for full backup on this fact—and though the film was about heterosexual love in the 1950s, everything about it was tailor-made for queer eyes to enjoy. So here comes the prequel, currently titled Summer Loving.

As you surely recall, the film’s opening production number told the story of Danny and Sandy’s pre-Grease summer romance (his details raunchy, hers chaste), and that’s what this story will explore.

John August, gay screenwriter of Big Fish and Charlie and the Chocolate Factory, will work on the script, and we’ve already envisioned something splashy and weird, the extreme opposite of bland and straight, and hopefully starring Vanessa Hudgens as Rizzo. We’ve made our choice here, so Hollywood please listen. ▼

Unless you’ve been living under a rock, or don’t care about the staggering entertainment value of weird Fyre Festival-style schemes that happily separate rich people from their money, then you’ve heard about Elizabeth Holmes and her “company,” Theranos.

She’s the one who decided to make a fake startup for blood testing that, instead, was a massive scam that wound up seeing her indicted on multiple counts of wire fraud. Her bizarre story became the subject of a podcast called The Dropout, then an ABC News documentary that aired in March, and will now become a limited series for Hulu starring Kate McKinnon.

Not only does McKinnon look like Holmes, we have absolute confidence in her ability to ride that strangely delicate line between playing it straight and mining the extremely weird comic potential inherent in this freakish demonstration of the follies of capitalism. ▼ 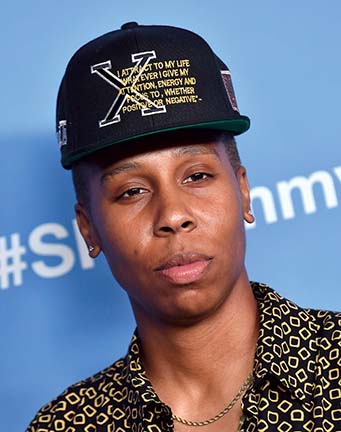 Sometimes Emmy Award winner Lena Waithe takes a break from being the Power Lesbian of All Hollywood, a breather from creating or writing or executive producing and running TV shows like Master of None, The Chi, and most recently BET’s series adaptation of the Eddie Murphy film Boomerang.

Sometimes she just wants to relax and be an actor, which is what’s going to happen on the next season of HBO’s sci-fi head-scratcher, Westworld. The details of Waithe’s role are being kept under wraps, of course, so we don’t know if she’s going to be a human being or a robot who looks like a human being, or even how long she’ll visit or if audiences will understand anything that’s going on at all.

But what we do know is that when we get the opportunity to enjoy her in front of the camera, we take it, happily, and if Marvel or DC ever decide they need a butch lesbian superhero, she’d be our first pick. ▼