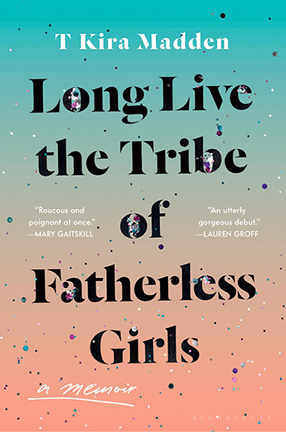 Some kids are born lucky.

Those are the ones who get everything they want; sometimes, they don’t even ask, and their hearts’ desire is presented. Some might call those kids spoiled but others might pity them.

Maybe, as in the new memoir Long Live the Tribe of Fatherless Girls by T Kira Madden, what those kids really want is love.

The story starts, as T Kira Madden remembers, with a mannequin. She was only two years old then, and she called him Uncle Nuke. Her mother had fished him out of the trash behind a department store, bringing the “fancy, distinguished” plastic man home “to protect me,” says Madden. “Remember this.”

When Uncle Nuke came to stay, mother and daughter lived alone because Madden’s father was married and had another family. Even so, his wealth and extravagance meant that Madden had everything a girl could want: ponies, private schools, concert tickets, and weekend jaunts to Vegas. She had plenty for classmates to covet, but what she really wanted was attention and approval.

That came from her parents, of course, but when she was in elementary school, she also had “pen pals,” grown men who wanted to meet her for reasons she couldn’t quite grasp. Attention came from various dealers who sold drugs to members of Madden’s family, including her parents. And attention of the wrong sort came from classmates who taunted Madden for her Asian heritage, her misshapen teeth, and her awkwardness.

By the time Madden hit middle school, her parents were addicts who were absent more than not and she could never remember where they’d gone. By high school, unsupervised, she was skipping school and had let her grades and favorite pastimes drop; drinking had become a new hobby, and she and her friends pushed the limits of the law nearly every day.

Madden, who’d been sexually assaulted as a young teen, began experimenting with boys, then with girls because she learned “how much more I wanted them.”

And she learned a shocking truth about herself.…

Starting out, Long Live the Tribe of Fatherless Girls is going to take some getting-used-to. The chapters aren’t exactly linear, not too chronological, and don’t seem to have much cohesion, as if someone drew a raggedy circle and then ripped part of it away. The temptation may arise to put the book aside.

And yet, the near-dispassionate tone in author T Kira Madden’s memoir is irresistible—almost compelling. Despite the calmness of her words, the chaos of the world she writes about hints that there’s more to the story that we haven’t read yet. And at the risk of spilling a secret, that’s exactly how this book turns out, in a jaw-dropping didn’t-see-it-coming whirl of quick final chapters that feel like a volley of BBs as they hit.

That end is going to leave you breathless. It’ll leave you desperately wanting to talk to someone about this book. If you want a memoir that’ll leave you gobsmacked, Long Live the Tribe of Fatherless Girls may be your heart’s desire.▼