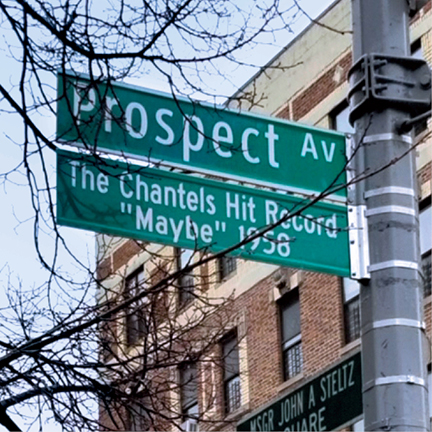 The 1950s musical girl group The Chantels, including local singer Lois Harris Powell, just had a street corner in the Bronx, NY, named after them.

Those of a certain age may remember these lyrics:

They belong to the song “Maybe,” the first big hit for one of the first African-American girl groups to enjoy nationwide success in the 1950s. According to The Rolling Stone Book of Women in Rock, the girl-group doo-wop sound was ushered into American cultural history in 1958 with “Maybe,” The Chantels’ breakthrough hit. Doo-wop features vocal group harmony, and no group represented that sound better than The Chantels.

The group was founded in the early 1950s by students attending St. Anthony of Padua School in the Bronx. The original five members were Arlene Smith, Sonia Goring Wilson, Renée Minus White, Jackie Landry Jackson, and a girl with a soaring soprano voice, Lois Harris. Now known as Lois Harris Powell, this chanteuse and Rock & Roll Hall of Fame member lives in Sussex County, just three miles from the beach.

Lois has friends here, so she began vacationing in the area often enough that it made sense eleven years ago to find a home here. But Powell is no ordinary resident. Now in her seventies, Lois still performs with most of the original Chantels, over 60 years after starting out.

When asked where she performs, Lois enthusiastically says, “Everywhere!” She’s performed at the Apollo Theater and Radio City Music Hall in New York, and even before 125,000 people on the National Mall for the Girl Scouts of America’s 90th and 95th anniversaries. The Chantels have also played to a packed house locally at the Blue Moon. 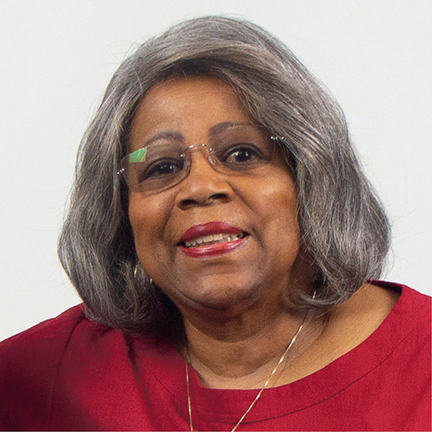 In a 2016 article in Delaware Beach Life, she said, “We do a show, and people tell us that we’re wonderful. People have traveled from all over the world to hear us sing. It is really very humbling to see how much people enjoy us.”

Lois is a human dynamo, and not only because she still sings professionally with the girls from the Bronx. She is a licensed nurse practitioner with a master’s degree from Columbia University, and provides holistic psychiatric-mental health nursing and wellness counseling services. She also provides workshops and educational programs on mental health and wellness. Lois says that over the years, each member of The Chantels enjoyed a successful career apart from music.

And she’s a stalwart volunteer for CAMP Rehoboth. She has been doing whatever she has been asked to do off and on since 2010. She has worked on the Sundance auction, helped on the grants committee, and currently serves on the Search Committee for the new CAMP Rehoboth Executive Director. One of her favorite tasks has been participating in the reading of the names on World AIDS Day, which she has done for several years.

In choosing CAMP Rehoboth to fulfill her urge to give back to the community, she credits the way the organization influenced the community and helped make Rehoboth and the surrounding areas a place with room for all and inclusive of all of its residents.

From its community center to the fundraising and partnering it does for other non-profit organizations, Lois sees CAMP Rehoboth as an organization worth her time and energy.

As for her singing with The Chantels, Lois will be performing on a cruise this coming fall. Quoted in Malt Shop Memories’ Scoop, a newsletter for the cruise featuring 50s and 60s music groups, Lois says, “Each of us had something to contribute, all because we sang. It kept us grounded.”

And grounded they are on a Bronx street corner, for making beautiful harmonies and celebrating an incredibly successful career.

And she’s grounded here too, giving back to the community. From another Chantel hit—”Look in My Eyes”:

We love you, Lois Harris Powell. Don’t go…you’re not only an American treasure, you’re a Rehoboth treasure too.▼