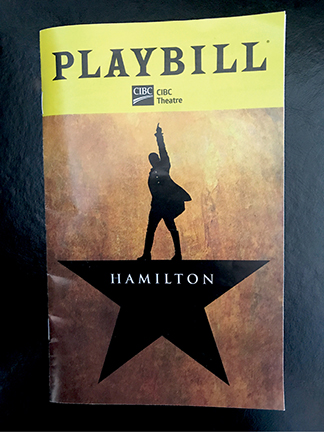 First off, that headline does not refer to me. Well, maybe the hungry part.

But on Thursday, April 18, just as the Mueller Report, about (what I think are) high crimes and misdemeanors was about to be published, Bonnie and I were not paying attention.

Barreling down the highway, with tickets for Hamilton that evening, we were cramming. I hadn’t crammed like this since an all-nighter for my 1969 English Lit final.

But there we were, Bonnie driving, me reading aloud the rapping, rhyming, stunningly brilliant lyrics by Lin-Manuel Miranda, trying to catch and understand it all before curtain time. Yes, this is the first Broadway musical I’ve ever known to positively require homework.

Admittedly, the closest either of us had previously come to rap music was watching Ice-T on Law and Order: SVU. Some remedial rap education and hip-hop schooling was needed for these aficionados of Broadway shows like Hello, Dolly! and Chicago.

And, luckily, we were heading for the city of Chicago, where friends had procured the tickets for us. So we’d had six hours the day before, and six more hours on this day to prep for our experience that evening.

As I finished reading the words for each number, we’d play it on the original cast recording and make sure we got not only the gist, but the nuance—and appreciated each internal rhyme, the genius concepts Miranda pulled from the biography of Alexander Hamilton, and the entire tale of the colonies rising up in revolution to defeat the British to free the thirteen colonies.

And just like my caffeine-fueled, once-upon-a-time all-nighter ensured my success recalling Dickens, Thackeray, and the Bronte sisters, our cramming for Hamilton did the trick. We got it, we loved it; it may have been the most stunning, fully-involving theatre experience ever. How is it possible, after all the awards, all the press, all the publicity these past few years about Hamilton, that we did not find it over-hyped? It really is that good.

And bold, having us completely believe we were watching George Washington, Aaron Burr, and Thomas Jefferson, though these real-life figures of Western European ancestry were portrayed by actors of color. It was so exciting.

The staged story of how a bunch of “young, scrappy, and hungry” patriots, most under 40 years of age, got the people in the colonies to start a revolution for their freedom resonates in 2019.

Don’t tell me that at 37, Mayor Pete Buttigieg is too young to be president. He’s older now than Hamilton, Jefferson, or Burr were when they incited a revolution and freed the colonies.

On stage, Alexander Hamilton talked, rapped, and sang about “Not throwing away my shot.” I don’t think that Pete Buttigieg, or any of the Democrats with their hats in the ring, should consider giving up their shot.

As Lin-Manuel Miranda wrote and the on-stage patriots sang:

Can a Broadway show incite another revolution? I hope so. For those of you who have seen the show, think about it.

And if you’ve not had the Hamilton experience, if you cannot get, afford, or conquer the logistics of getting a ticket, or even if you haven’t the slightest interest in seeing this amazing show, I have some advice.

I suggest you get hold of the recording, grab a friend or two, have your favorite beverages and snacks on hand, and read and listen to the words. I bet you’ll be surprised how much you love rapping along. And marveling at the sheer genius of the musical poetry of Lin-Manuel Miranda.

Then, rise up! Let’s not throw away our shot. At the very least, not at the ballot box. ▼

Fay Jacobs is an author of five published memoirs. Her latest is Fried & Convicted: Rehoboth Beach Uncorked. As a humorist, she’s touring with her show Aging Gracelessly: 50 Shades of Fay. Visit her online.