This Is Ben Platt 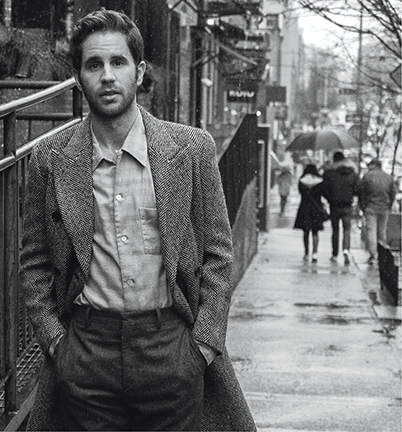 It comes up casually, as Ben Platt prefers. Tucked into the song “Older,” the line is a personal aside expressed on an otherwise universal ballad, about wishing to speed up time in your youth, only to hope for more of it as you age: “And will I get to know myself in the place I am/Get to fall in love with another man, and understand.”

If you didn’t already know, Ben Platt is gay, this is how he wishes you’d find out. Casually. The theater star turned pop crooner came out in his personal life when he was 12, then landed his Broadway debut in The Book of Mormon as Elder Cunningham in 2012.

He went on to bag a Grammy and a Tony, an Emmy too, for his moving portrayal of the titular teen in Dear Evan Hansen, also on Broadway. And, of course, he brought literal magic to the Pitch Perfect franchise, as super nerd Benji Applebaum.

But Platt’s earnest and emotional Atlantic debut, Sing to Me Instead, is his first public expression of self, at 25. “The main reason I wanted to make this music was to have the opportunity to go around the country and play it live and have that live connection, because that’s what I grew up loving the most,” he says, “and singing live is my favorite thing to do.”

In addition to a 12-city tour, Platt will also star alongside Gwyneth Paltrow, Jessica Lange and Bette Midler this year as a high school go-getter who’s eager to be the actual president—but first, student government—in the forthcoming Netflix comedy series The Politician, which debuts Sept. 27. The series, he says, is, “in true (screenwriter) Ryan Murphy fashion, very queer-positive.”

How do you process the fact that you’ve been making so many people cry with this album?

You know, it’s a strange thing. I think it’s just nice to see that people are finding ways to connect to it. I tried to make it as sort of specific as possible because usually that kind of thing begets the most universality. And I hope it’s all good, cathartic-type tears and not the bad kind! (Laughs)

How did these songs come to you? In waves? All at once?

First in waves. I think when I first sat down to write the album I tried to just lean on what came in terms of what I thought deserved to be sung about. Because I come from the theater, I feel like my philosophy has always been that you only really sing when there’s something emotionally valuable enough to sing about. And that ended up being largely the relationships that I’d had and a couple I was in while writing.

What hadn’t been conveyed that you wanted to say with this album?

“Grow as You Go” is the one that comes to mind only because I had never really heard a song that addressed this cop-out thing that always tends to happen when you’re in a relationship and you get to a point where it gets a bit too scary and the person backs out with the excuse of, “I need to go find who I am and I don’t have enough legs to stand on as my own person.” Of course, that’s valid in many cases, but I’ve also found out that it’s kind of something to hide behind.

I think if the connection is strong enough, and theoretically if it’s a special enough person and it’s the right person, then it shouldn’t really keep you from experiencing personal growth and finding who you are just because you happen to be with someone else who is also figuring those things out.

Was there ever a time you didn’t think an album like this, where you could be your out, authentic self, would be possible?

I think, yeah. If we’re all realistic about the world, it’s not all roses and it’s not all fantastic and we don’t live in a vacuum where it’s all pure acceptance. And particularly as an actor, there’s a lot of stigma surrounding what you’re castable as when you’re out of the closet.

But as far as the decision (to be out), it really was a no-brainer, because if I was gonna try to do something that felt authentic to me…

You say there’s a stigma to be out if you’re an actor. Do you think gay actors and musicians are asked to keep their sexuality quiet when promoting projects and has that ever happened to you?

I’m sure that’s something people encounter. I know that’s definitely not something we’ve moved forward from in general. I have been really lucky personally to work pretty much only in environments which were incredibly accepting and open—I mean, I grew up in the theater where everyone is gay, so it was never an issue (laughs). And I don’t necessarily think that an actor’s private life, regardless of their sexuality or any of that, is pertinent when you’re playing a different character.

I think when you’re promoting something, it’s about the project and the work.

But I do maybe think there is pressure to present a certain accepted form of masculinity, or to feel like you can still fit into certain boxes so you don’t limit yourself. I’m hopeful that is slowly fading away and that everybody can just accept that actors are chameleons and we can play who we can play.

Is it necessary to still make a coming-out announcement in 2019? I gather that you think it’s not?

I just don’t think it should be perceived as an abnormality at all, and in and of itself, having to announce something suggests that it’s departing from the norm or that it’s something that needs to be addressed. I think it should just be part of who we are—same as that I’m Jewish, and I’m also gay. The more it can become an assumed part of reality, the better.

So, for example, it’s time to move on from calling you “gay musician Ben Platt.” We don’t need that identifier anymore, do we?

Alongside Blake Shelton and Zac Efron, you were included in People’s Sexiest Man Alive in 2017, as Sexiest Broadway Performer. Were you prepared for that moment in your career?

Certainly not! (Laughs) That was not something that was ever on my sort of preconceived bucket list! I mean, it’s very flattering and very nice, but it was never a conscious goal. It was not like the Tony and the Broadway of all of it, but it was lovely to see! And it made me feel good—and made me want to go out and go on some dates!

Did it get you some dates?

Well, not necessarily from it but it restored a bit of confidence. It was a nice boost.

Are LGBTQ youth reaching out to you expressing what this music means to them? Are you seeing the same tweets that I’m seeing?

Of course there are messages from youth, particularly LGBTQ youth who feel really affected by the representation and feel really seen and like they can see themselves in the art, which is something that’s obviously very beautiful to me. But what’s been the most heartening to me is how innocuous that aspect of it has been and how it’s really been about the music itself, and how regardless of walk of life or sexuality or age, people are really finding ways that these songs fit into their lives, and that’s the ultimate gift: that they become so malleable. That’s been really beautiful.

That songs that are very specific to your own life can have universal appeal?

For sure. And that I can sort of express an experience that can then make it maybe easier for someone else to go through that same experience or an experience like that.

What have you learned from other out artists, like Sam Smith and Troye Sivan, when it comes to navigating the music world as an out artist?

I would say from all artists, not just queer artists. But certainly all of my favorite artists, queer or not, are sort of the ones who are true to themselves and more singular to themselves and not really wasting any time trying to fit into a preconceived box.

I think the only reason it’s been successful thus far and people are connecting with it is because they’ve allowed me to be individualistic. And so I certainly admire any artist, queer or not, who is able to blaze their own path in that way. Just if you’re authentic, I think that’s the most attractive quality beyond just a beautiful voice, feeling like this is undoubtedly exactly who you are. ▼

As editor of Q Syndicate, the international LGBTQ wire service, Chris Azzopardi has interviewed a multitude of superstars, including Cher, Meryl Streep, Mariah Carey and Beyoncé. His work has also appeared in GQ, Vanity Fair and Billboard. Reach him via Twitter @chrisazzopardi.