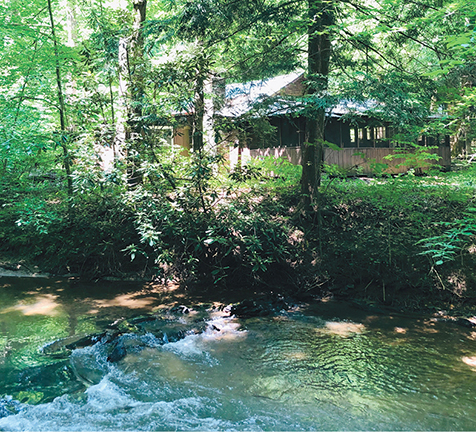 A Tale of Two Camps

Over time the cabin had settled into the surrounding trees in a way that made it feel a natural part of the forest. Nestled mere feet from the banks of Cane Creek in the Appalachian foothills of North Georgia, the Holland Hut—as the sign over its front door proclaimed—stood for decades as a silent guardian to five generations of the Holland/Archibald family.

Granddaddy Holland was a Methodist preacher in the North Georgia Conference of the United Methodist Church, and one of the founders of Camp Glisson. Built in the 1930s by the Epworth League—of which he was a member—the idyllic setting provided a retreat for Methodists—and as a perk for its founders, a private, creek-side cabin just downstream from the beautiful Cane Creek Falls.

To me, my brothers and sister, and the Holland cousins, Camp Glisson was paradise, and if truth be known, our generation felt like we owned the whole camp—especially the Holland Building which we, for all of our lives, called “Granddaddy’s Building.”

We were all PKs—Preacher’s Kids—with all the good and bad connotations that accompany such a label. As Methodist PKs, especially back in those days, the bishops moved our families every few years to different congregations in North Alabama and North Georgia.

Throughout our lives, Camp Glisson was the only permanent home we had. We always found our way back to the rippling sound of that creek, and the cool dampness of the dappled pathways that led to the falls.

Last October we carried my Mother’s ashes back to Cane Creek Falls.

With her death, our beloved Holland Hut returned to the folks at Camp Glisson, and so in mid-May of this year, I joined my cousins and my siblings to clean out the cabin and say farewell to our home in the mountains.

The farewell was bittersweet as are all farewells amid the fading memories of a lifetime. With Mother’s death, and Steve’s, and Steve’s mother’s still so fresh in our hearts. We cried, and we laughed until we cried again—sometimes both at the same time.

The first place that Steve and I ever traveled as a couple was Camp Glisson. It was late autumn in 1978, and that night the temperature dropped below freezing. There was no heat in the cabin so we dragged a mattress in front of the stone fireplace and burned some furniture to get through the night. Early the next morning my cousin George came to the rescue of his Archibald cousins as he always has—and as he did once again as we emptied all that 1930s era furniture out of the cabin.

Two years later, Steve and I took another trip together that would ultimately have a lasting impact on our lives. This time to Rehoboth Beach—a town originally developed as a Methodist Church campground. I made note of that fact at the time but did not pay much attention to it until the late 1980s when I began to play around with names for an odd idea beginning to take shape on scribbled notes and sketchpads scattered around my studio and drawing table.

In time, the idea for creating a camp of our own emerged, and CAMP Rehoboth was born.

As anyone who has ever kept up with the history of CAMP Rehoboth is sure to know by now, I have always been delighted by the idea that like my Granddaddy Holland, we too had founded a CAMP with Methodist roots.

They are not at all the same, but still, there is symmetry in that for me. I am not a predestination kind of guy, but there does seem to be a whisper of fate running like a thread though my life.

I am especially aware of that thread as the time draws near for me to step back from the role that has occupied my life, in one form or another, for the past 30 years.

There have been too many endings for me in recent months, and more farewells still to come. With each passing day since Steve died in March of last year, I begin to consider future possibilities that would previously have been unthinkable to me.

As we packed up the family cabin and said goodbye to a place we have loved all of our lives, I knew in my heart that it was not the end of my goodbyes. I brace myself for what comes next, even as I remain hopeful for the future.

Goodbyes, after all, are nothing more than preparation for the next hello.

The irony in this tale of two camps has never been lost on me. From the beginning of CAMP Rehoboth the element of gay “camp” figured into its naming. The outcasts always find ways to laugh through the pain—to own the words of hate used against them and in the process transform them into words of strength, and pride, and joy.

The transformation of Rehoboth Beach from an uptight church retreat to an open, supportive community committed to creating room for all is pure camp. Why? Because in the act of laughing at the absurdity of the situation we actually became true examples of what I believe the church calls its congregations to be—loving, open, kind, and accepting of all people.

The recent decision of the United Methodist Church to strengthen its condemnation of LGBTQ people is a complete failure to live up to their teachings—to love one another.

The Methodist church will split over this issue. On the positive side, an ever-growing number of churches and individuals are organizing a progressive and open branch of Methodism.

No matter what it is, change always hurts when it comes. We prune back branches in our gardens in order to make room for new growth.

I feel a lot like those bare, knobby branches right now.

I am ready for what comes next. ▼