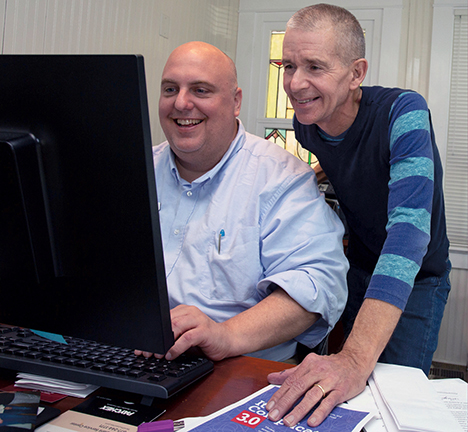 Ok, Boomer (Looking Back to the Future)

This is the last 2019 issue of Letters from CAMP Rehoboth. The next time it goes to press, both CAMP Rehoboth and this magazine will be celebrating a 30-year anniversary.

There were no rules back then. We made it up as we went—and we failed as often as we succeeded. We never heard the idea-squashing words, “that’s the way we’ve always done it,” because none of us had ever done anything quite like it before. There was freedom in that. We reinvented at will.

At first, the response was tepid. There were eye rolls and shrugs throughout the community. “What are those boys up to now?”

Slowly, step by re-step, the story of CAMP Rehoboth was written into our lives and our community.

That’s what Gen Z and millennials say about our generation today. It is not a term of endearment.

A top definition in Urban Dictionary: “When a baby boomer says some dumb shit and you can’t even begin to explain why he’s wrong because that would be deconstructing decades of misinformation and ignorance so you just brush it off and say okay.”

From the moment I received the news that Steve’s cancer had returned, and continuing throughout his illness and death, right on through the next year and half of keeping CAMP Rehoboth on stable ground, my world turned upside down. I have lived through so much change I can almost convince myself I’m not afraid of it anymore.

Life changes daily. And honestly, doesn’t it need to? The world is a mess. Our country is paralyzed. So divided we exist in our own bubbles.

No wonder our younger generations are disgusted with us.

Ok boomer. Get a grip.

Over the past year, CAMP Rehoboth conducted an extensive search to find a new Executive Director. David Mariner stepped in to that position on October 7. My task between now and the end of the year is to make sure David’s transition is as smooth as possible. At the same time, I am stepping back from a leadership role at CAMP Rehoboth, including moving my office into my studio on the other side of the CAMP Rehoboth courtyard. It will be the first time I have not been located in the CAMP Rehoboth office in decades.

And I’m okay with that.

The time has come for change. For me and for CAMP Rehoboth.

The process of letting go of the past is a painful one. It is also liberating—and crucial to creating a positive way forward both for myself and for CAMP Rehoboth.

The office Steve and I shared on the second floor of the Community Center was jam-packed with files and boxes we moved from office to office over the decades as CAMP Rehoboth outgrew space after space. Most of it has been sent to recycling or to shredding, but in the process of sorting it all out the history of CAMP Rehoboth has been remembered.

Sundance archives, a Love poster, old personnel files, SCAC board minutes from the ‘90s, the first Rehoboth Beach World AIDS Day event, CDs and tapes from CAMP Rehoboth Follies, boxes of props from Letters’ cover photo shoots, years of photographs—a world of memories. Oddly, all of it is easier to let go of than I thought it would be.

Working with David in the month since he stepped in to his new role as Executive Director of CAMP Rehoboth has assured me that he is well prepared for the task. A founder transition is a difficult time in the life of any organization—we’ve been aware of that for years. I’m confident that CAMP Rehoboth has found a strong leader who will make the transition as smooth as possible—and have the vision to create a new future for CAMP Rehoboth.

We live in a remarkable community, and the one thing I really didn’t want to have to do was leave it behind. I’m still here. And for now, I still have some Sundance and Letters work to do. CAMP Rehoboth has always been about community, and this transition is not at all limited to David and me. It is a community transition.

To those who haven’t yet had the chance to meet David, or missed one of the CAMP Rehoboth Open Houses in early November, stop by the Community Center and introduce yourself. Surely, his most difficult task is going to be learning everyone’s name!

Ok boomer. Time to get out of the way.

That’s my goal for the end of the year. Embrace change. CAMP Rehoboth needs it. So does our country.

I hope with all my heart that David has the luxury to reinvent as he goes just like we did.