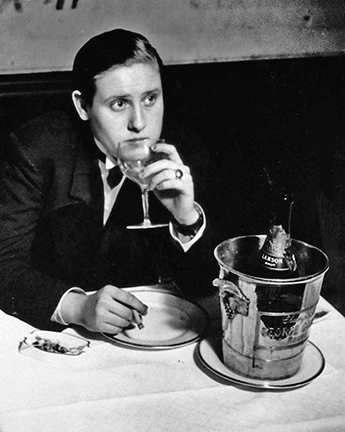 Last One to Leave the Party Please Shut the Lights

One of the many things our LGBTQ community does very well is party. We really know how to put on the suits and feathers, the trousers and skirts, the bow ties and gowns, and shake all that couture on the dancefloor.

We’ll be doing it again from now to New Year’s Eve, celebrating our survival after yet another difficult year of political turmoil and attacks on our liberties. We’ll ring out the old year, ring in the new with style, verve, and hope.

This being America, where optimism, no matter how misplaced, is coded into our collective DNA, we still cling to the belief down deep in our bones—despite ongoing attacks to those bones—that we’ll survive another year, that next year holds the promise of being better, and that we won’t have to turn off our party lights.

In the 1920s and 30s, the lesbian party lights were shining in the shadows of Paris’s Left Bank. Paris was already a haven for the creative avant-garde, home to local and ex-patriate luminaries from the worlds of literature, film, painting and sculpture, theater and dance. This creative, free thinking and free-living environment was ripe for the sexual avant-garde which existed in a quasi-secretive milieu of gay and lesbian nightclubs.

For Paris lesbians, the place to be was Le Monocle, owned and overseen by the extraordinary Lulu de Montparnasse. Opened on an unknown date in the 1920s, Le Monocle was one of Paris’s first lesbian clubs. It became the most famous, as did its owner.

We don’t know much about Lulu, though we do know why she chose the name Le Monocle for her club. According to no less an authority than French writer Colette, the fad of wearing a monocle was a signal that the female wearer was a lesbian.

As to Lulu herself, I could not find any reference to where she was born or even if Lulu was the name she was given at birth. But despite the scant biography, Lulu looms large in lesbian cultural heritage.

In this writer’s admittedly personal opinion, no one ever—not before or since—has hosted a lesbian nightspot with more style than Lulu. Splendid in her tuxedo, her hair exquisitely groomed, Lulu set the standard for the butch elegance she expected of her patrons. Moreover, the club’s staff of bartenders, wait staff, and hat check employees (ah yes, the lost era of hats) were no less suavely turned out. Femmes attending Le Monocle were assured of a first-class assortment of possible beaus. Ruffians or the slovenly attired were not welcome.

The photographer Brassai, who immortalized Lulu in 1932 in the stunning photograph accompanying this article, described her as having a “stentorian voice” which “filled the room.” I wish he’d recorded it. To hear the French of this magnificent Parisian butch filter up through time would fill this dyke’s romantic soul.

Lulu kept Le Monocle going through the Jazz Age of the 20s and the hard times of the Depression in the 1930s, but the club was finally felled by the brutal hearts of the Nazis. When Hitler’s troops marched into Paris on June 14, 1940, they brought with them not only soldiers, tanks, and guns; they brought hate.

The rulers of German-occupied Paris stifled the arts and persecuted people deemed “inferior.” Homosexuals were a prime target for the Nazi onslaught. Soldiers and collaborating Paris police rounded up lesbians and gay men and sent them off to the horrors of the concentration camps.

Lulu, through sheer grit and the determination to provide lesbians with what we would now call a “safe space,” kept the doors of Le Monocle open for a while, but early in the decade of the 1940s this safe space was safe no longer.

According to Brassai, Lulu relocated to Montmartre’s Rue Pigalle, but wartime Paris was no longer conducive to freedom of any sort, not the least to sexual freedom. Lulu’s party was over. She shut the lights.

Our lights, though, are still shining.

Happy Holidays, everyone. Party on. ▼