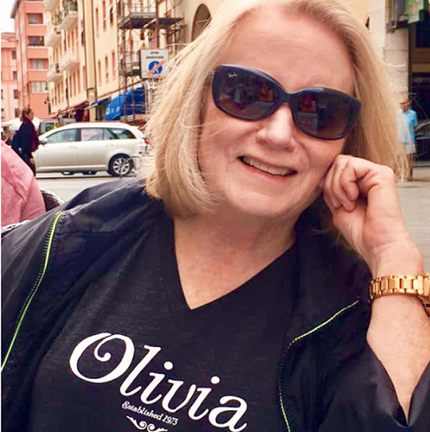 Linda Kemp: Olivia’s Gal on the Ground in Rehoboth

Looking at a throng of women posing for photos while wearing blue t-shirts emblazoned with the word REHOBOTH on them, a bystander asked “What’s Re-Ho-BOTH, a sorority? A church? What is it?”

“Rehoboth is a beach town in Delaware where all these women are from, traveling together on this cruise.”

“But where’s Delaware?” the onlooker asked. Linda rolled her eyes and offered a geography lesson.

That was years ago. Now, almost all the women traveling on Olivia cruises or to Olivia resorts (over 300,000 so far) from all over the world know about Rehoboth Beach, Delaware, its reputation as an LGBTQ hometown, and its traveling women.

That’s because, since she joined Olivia Travel in 2008, Linda Kemp has been booking hundreds of Olivia vacations for Rehoboth area women, as well as bringing Olivia to town as presenting sponsor for CAMP Rehoboth’s Women’s FEST, donating cruise vacations to CAMP Rehoboth’s Labor Day Sundance auction, and a lot more.

Linda Kemp, plus Rehoboth, plus Olivia Travel has been a winning combination.

In 1992, with many of her friends flocking to Rehoboth for weekends, Linda, who lived in Northern Virginia, bought a weekend home on the water here. It was a manufactured (mobile) home, and Linda recalls getting the deed at the DMV, then laughing as she went to bed that first night, wondering if there was some kind of parking brake she was supposed to apply to keep the house from rolling into the water.

Approaching 30 years later, Linda still owns that cool waterfront home and it hasn’t moved an inch. Also, after retiring in 2012 from her career as Brand Manager for the US Postal Service, she now works for Olivia. Hence, the flood of women taking Olivia cruises and the flood of sponsorships from Olivia to the community.

According to Linda, going to work for Olivia was unplanned. Prior to her retirement, she took an Olivia cruise herself, and wound up kibitzing with the sales and operations staff. “By the time we got back to home port, they offered me a job,” she laughs.

And she’s made the most of that job. “I’ve gotten to travel to amazing places,” she says, showing off photos of herself in a Chinese rickshaw, at Omaha Beach in Normandy, France, on the Greek Island of Santorini, and so many more.

Likewise, she’s parlayed the job into marvelous donations for CAMP Rehoboth and Women’s FEST. Olivia’s involvement started out as a mere table in the Women’s FEST Expo, where Linda sold Olivia trips. Soon that morphed into help getting top name entertainers to Rehoboth. And then Olivia became the Presenting Sponsor for Women’s FEST, as a win-win for Olivia and the FEST.

In addition, Olivia sponsors the Sharks, a local over-55 women’s softball team, and helps sponsor other Women’s FEST concerts throughout the year.

As for the donated trip for Women’s FEST, it started out as an auction item at the Friday night concert at FEST. The auction always raised lots of money, but it was eventually changed to a raffle so all women, not just those who could afford to bid thousands of dollars for a trip, could have a chance to participate. The raffle tickets were set at $20, giving hundreds of women a chance at the donated cruise.

And while Linda has been selling Olivia trips since 2008, the company itself is going on 46 years old. It began as a record company recording women’s music and producing concerts in 1973 and gradually grew and morphed into a travel company, with its first cruises in 1990. Olivia now offers cruises on large ships, resort vacations, riverboat cruises, and adventure travel excursions. Their 30th Anniversary cruise is set to sail to the Caribbean this coming January.

Linda will be aboard that anniversary cruise and has already reserved quite a few staterooms for Rehoboth women. In the meantime, you can spot Linda around town, generally clad in a t-shirt that says “Olivia” or a golf shirt with the Olivia logo on it.

“Does everything you wear say Olivia?” she’s been asked. “Pretty much,” she says with a smile.

And Rehoboth Beach, Delaware—not a church, not a sorority, but a cool hometown—is happy about that. ▼