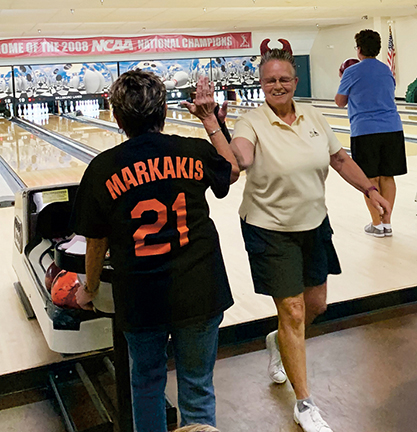 As I drove west on Route 24 on the night before Halloween, I noticed I was following a parade of cars (Jeep, Subaru, Mini-Cooper, etc.) filled with sporty looking women.

Since softball season was over, and it was too late for pickleball, I followed the parade wondering where these sporty gals were going. It was no surprise that just after getting through the town of Millsboro and before Route 113, the parade headed south onto Mitchell Street, where the women retrieved their bowling balls from the cars and headed into Millsboro Lanes.

Once inside, it was evident that this was the place to be on a Wednesday evening in the fall. Sixteen teams were getting ready to compete in the Rainbow Ladies Bowling League. Each team has four players and the league keeps a roster of over 50 women who are available to substitute each week. That’s over 110 women involved in this league—I had to find out more about it.

The league is managed by our local bo 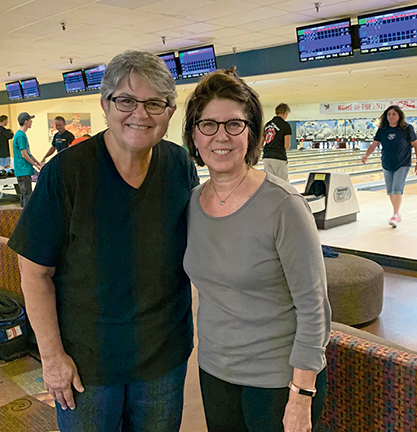 wling legend, Rina Pellegrini (featured in a previous Letters column). The team names may give away how serious the fun is in comparison to the bowling skill. The teams include: Lane Surfers, No Split, Striking Hummers, Single 2 Spare, Hot Shots, Seahorse Striker, Spare it Up, Spare Me, Lewes Lightning, Girls Rule, 3 Beers & a Water, The Split Ends, Splits and Giggle, RB Strikers, Lady Balls, and The Bowling Stones. Many teams had a story to tell about how they got to bowling and why they love this league.

The Lane Surfers were at the very end of the bowling alley on Lanes 23-24. Their team members (Teresa Waiters, Jeanette Laszczynski, Nancy Commisso, and Angie Strano) were celebrating a birthday and bowling at the same time. Angie currently has the second highest individual average (172.33) for the league and told me she just loves the social aspect of this group along with the chance to enhance her skills on the lanes.

On lanes 17-18, it was No Split (Susan Morrissette, Kim Bailey, Lori McCracken, and Lindy Koysdar) playing against Hot Shots (Barb Sweeney, Katherine Lawrence, Terri Nye, Marcia Howe). Susan started bowling about five years ago because her kids were grown up and away at school and she wanted a new adventure. She started out averaging about 66 and currently has an average of 126. Hotshot bowler Marcia Howe is serious about having fun bowling, evidenced by her devilish Halloween headgear.

As I wandered down to lanes 11-12, I noticed Yona Zucker having a great time with her teammates on RB Strikers (Diane Cutler, Donna Ohle). The team wanted to name themselves “Three Jews and A Shiksa,” but Yona’s partner vetoed that idea. Yona loves the camaraderie of this league, but sometimes the “late” night can be too much for her (she is seldom up later than 9 p.m.) so she pre-bowls during the day and her scores are recorded and added to her team’s results.

Diane Cutler came to this bowling league because she knew Donna Ohle from Sawgrass Pickleball and knew that the group had to be fun. She had not bowled in over 30 years; she started out averaging around 80 and is now shooting close to 100 every game.

The league is split into two halves: The first half runs October through early January and the second half is January through April. This allows snowbirds who leave in January to still participate in the league. At the end of each half, team members are awarded trophies and prize money. The league has a great “End of Year” party at Millsboro Lanes in January.

Are you interested in bowling with this league? If so, please contact Rina Pellegrini at rpelle6469@gmail.com. The league meets on Wednesdays at 6:45 p.m. The cost for league play is $16 and shoe rental is $2. You can sign up for either or both halves of the season.

Every team echoed how friendly and fun the league is and how great it is to bowl at Millsboro Lanes. The snack bar has lots of options for munching, the bar is well stocked, and the staff takes very good care of the league. The bowling alley may be a little hard to find, but it is well worth the trip out Route 24 to join this great group of sporty gals. ▼