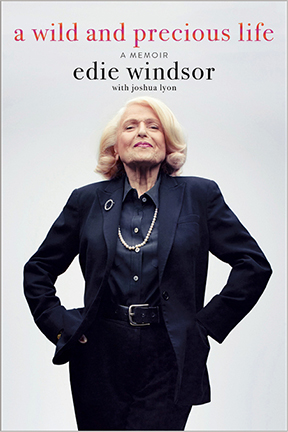 There’s a long line of people behind you.

Some are afraid to be seen, to speak up, or to show up. Others don’t want to get involved, so they’re sitting this one out. One thing, though: they’re all watching to see what you do next because, as in the new memoir, A Wild and Precious Life by Edie Windsor with Joshua Lyon, someone’s got to be first.

There was never any doubt that little Edie Schlain was fiercely adored.

The youngest child of the family, Edie grew up wanting to be like her big sister, protected by her big brother, and the apple of her parents’ eyes. She admits that she was “spoiled” then, not in a bad way but just enough to give her the confidence and brass a child of the Depression might need.

She remembered the beginning of World War II, although not in the sense that most did: her recollections were of a houseful of boys, her brother’s friends, laughing and eating and gathering in her parents’ home before going off to war, and mourning when word arrived of those who’d never come home. Edie always liked boys and as she matured, she bantered with her brother’s friends although she occasionally thought it odd how much she liked watching other girls.

“The idea that anything physically intimate with a girl could happen simply did not exist,” she said.

But eventually, it did, with a tennis partner in college, then with a female roommate she loved before realizing that there was “no other available reality” than to fall into lockstep with other young women of the 1950s, settle down, and marry a nice man.

At the end, Edie, who’d convinced her husband to adapt the surname “Windsor,” realized that she needed to tell him the truth. Pondering how to tell him, she immersed herself in Judy Garland “fantasy” musicals, and she planned:

“If you’re looking to read about Edie’s Supreme Court case, put this down…” says co-author Joshua Lyon in his preface. But don’t be too hasty: A Wild and Precious Life has enough to offer, all by itself.

Indeed, though he still touches upon the fight that helped achieve marriage equality, Lyon says that Windsor “desperately wanted” readers to know about her pioneering work in computers and technology, which was a “core part of her identity” and of which she was enormously proud. In her words here, which Lyon indicates that she edited herself, Windsor also woos readers with breezy wit, racy love stories, and seemingly casual-not-casual, semi-nonchalant depictions of being a lesbian in the mid-twentieth century, and what it was like living in the shadows but flirting hard with the light.

Early in this book, Lyon says he fretted about how to finish it after Windsor died, but he needn’t have worried. Though its ending feels a little rushed, A Wild and Precious Life flows perfectly and entertains delightfully, making it a book you’ll want in front of you.▼