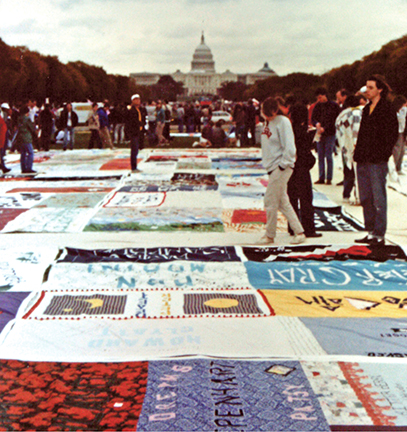 This Old Activist Is Pissed Off

This is a horrible time to be a humorist.

These days, as vile as our political atmosphere is, I still try to write lightly about the excesses of Costco, the beastly hot weather, the ridiculous electronics in my new car, all universal subjects where we can chuckle along. Goodness knows, we all need a laugh.

But I cannot do it today. Right now, as I write, the US Supreme Court is hearing arguments from lawyers representing citizens who want to make discrimination against LGBTQ people the law of the land. Every lawyer I know thinks we will lose this case. We will be fair game for bigots.

So here I am. Pissed as hell and mad as a wet schnauzer, which is pretty mad. I considered going to stand on the steps at the court today, but in the end, the weather, the distance, and the futility of it all keeps me home. 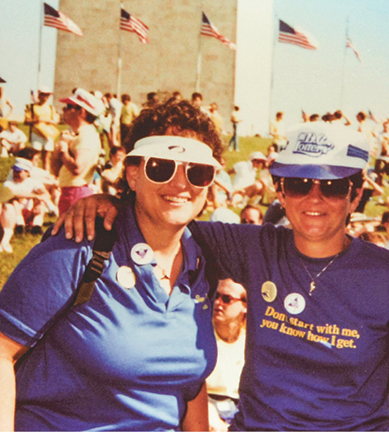 y rights march in Washington, DC was attended by over 100,000 people. I didn’t march as I was just peeking out of my closet, but I devoured the newspapers.

Most of those picket signs said “Gay Rights Now!” We used the umbrella term “gay” back then, as lesbians, like all women, were second class picketers.

I was at the October 11, 1987 March on Washington for Gay Rights where we marched almost 750,000 strong (the newspapers said 500,000), under a threatening sky. We marched and shouted “Hey, Hey, Ho, Ho, Homophobia’s Got to Go” as we passed panels from the AIDS quilt. Signs included the word “lesbian” by then. We had no rights at all and many of us threatened to put our taxes in escrow until we got those rights. Nobody had the guts to do it.

I held a “Silence= Death” sign as I marched and acted up to support my gay boyfriends.

By the 1993 March on Washington, there were well over a million marchers, but the US Park Service consistently underreported our numbers. I was there, tromping around with signs and buttons and demanding my rights.

Two years later, the fall of 1995, as I came to spend weekends on my boat on Rehoboth Bay, I was invited to write a column for Letters. The rest is almost 25 years of column history, mostly humor but speckled with activism.

In 1998, 21 years ago this month, Matthew Shephard was bludgeoned and left to die on a fence in rural Laramie, Wyoming. I hadn’t moved full-time to the beach yet, so Bonnie and I went to DC the night he died, taking part in the candlelight vigil on the Capitol steps. The murder of this young man, simply for being gay, was so sad and unnecessary and maddening; all we could do was stand there in the October chill and cry.

My becoming a full-time Delaware resident coincided with some of the first efforts to make Delaware safe for LGBT people (the Q came later). In March 1999, there was the first Gay Lobby Day at the State House in Dover. CAMP Rehoboth sent a contingent. I was there with many others, lobbying, holding up signs, wearing buttons.

I schlepped from Rehoboth to DC for the 2000 Millennium March on Washington for LGBT (still no Q) Rights. More signs, more buttons, same old “Hey, Hey, Ho, Ho.” Lots of us laughed that the day trip exhausted us and we were getting “too old for this same shit.”

From there, it took years of lobbying, marching, writing, and picketing to pass an anti-discrimination bill in Delaware. When it finally passed, in 2009, the bill was signed by Governor Jack Markell at CAMP Rehoboth.

Then, we lobbied in Dov 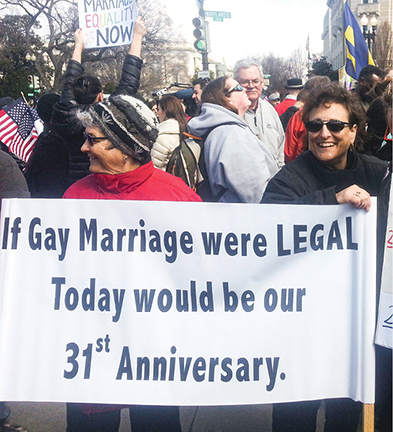 er for civil unions, marriage equality, and an anti-discrimination law for transgender citizens. I testified, along with many others, and I was there for the votes. I sat in the balcony when the gavel came down, and we cheered wildly as Delawareans got access to marriage equality. It wasn’t federal marriage, of course, but we would join other states, like Massachusetts, and be able to marry in our home state with some limited state rights.

On March 27, 2013, Bonnie and I stood on the steps of the Supreme Court as oral arguments took place in Edie Windsor’s case to overturn the notorious Defense of Marriage Act. If she won, citizens living in states with marriage equality laws would be granted federal marriage rights.

Bonnie and I held a sign that said “If Gay Marriage Was Legal, today would be our 31st Anniversary.” We were interviewed by CNN, the Washington Post, and NPR, and were spit on by the Westboro Baptist Church. Eventually, the Supreme Court sided with Edie Windsor and Delaware, along with 11 other states, saw their citizens granted federal marriage rights.

We were at CAMP Rehoboth on June 26, 2015, when the Supreme Court declared gay marriage the law of the land for all the states in the union. Spontaneously, people came, from all over the area, to the CAMP Rehoboth Community Center to celebrate and be with “family.” All LGBTQ of it. What a joyous day that was.

Now look, this is just my story. I’m far from the only one who did all these kinds of things. And I’m not even the most active activist at CAMP Rehoboth. But I have written activist screeds, marched, worn buttons, and shouted “We’re Queer, We’re Here, Get Used to It” more times than I can even remember.

And still, this morning, in effing 2019, although many attitudes have changed, and much progress has been achieved, lawyers are arguing about my basic civil rights, arguing to make it okay to fire me from a job and send me back to being a second- class citizen just for being a lesbian.

I’m irate and exhausted. It will be months, maybe into next summer, before we find out if we are once again bait for bigots. My only comfort is that we’re queer, we’re here and we stand together. ▼