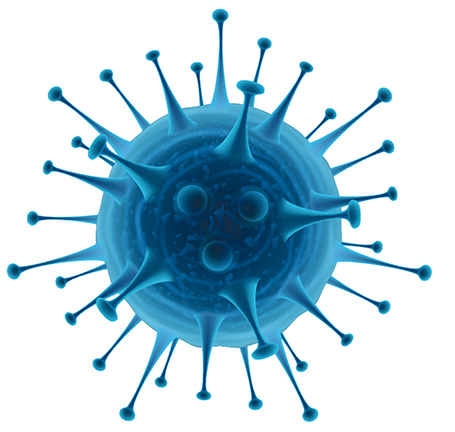 V is for Vampires!

At least, that was my first thought as I considered this issue’s “monsters” theme. But then it occurred to me that there’s a health-related monster that is more lethal (in the real world) than vampires, and that also starts with “V”: viruses.

There are lots of viruses. We’re all familiar with the famous ones, e.g., the human immunodeficiency virus (HIV) and human papilloma virus (HPV), which have turned up in previous columns.

Then there are the ubiquitous viruses responsible for the common cold—about 200 of them—which rapidly mutate, accounting for a lifetime of colds: as soon as we develop immunity to one, a different cold virus or a new-and-improved version of a previously-encountered one arrives to infect us.

With winter approaching, we’ve all been hearing lots about another disease that’s caused by a virus: influenza, or “flu.” This virus comes in many strains, some of which have been given names, e.g., “swine flu” and “avian flu.” Or, you may have heard of “H1N1” flu, or of flu types “A” and “B.” Whatever it’s called, you’ve probably experienced the symptoms: fever, cough, muscle aches, runny or stuffy nose, headaches, fatigue. Some people (usually children) have vomiting and diarrhea.

Happily, there’s another good “V” word when it comes to combating viruses: vaccines!

Vaccines provide protection against flu, and now is the best time to get your flu shot, before the flu season is in full swing (that usually occurs around January or February). It takes about two to four weeks for the body to fully respond to the vaccine, so the longer you wait, the more likely you are to encounter the virus before your system is fully prepared to ward it off.

That lag time, by the way, is often what lies behind those stories you hear about people “getting the worst case of flu I ever had right after I got that shot.” People sometimes conclude the flu resulted from the shot, and vow to avoid flu vaccines in the future.

In actuality, you can’t get flu from the flu shot: the virus strains used in the vaccine are dead. Those folks most likely developed flu from being exposed to the virus before they could develop immunity to it.

There are a couple other reasons you may develop flu despite having received the vaccine. For one, each year’s vaccine is developed using the best-available information on what strains of flu will be circulating in a given flu season. Some years the strains used in the vaccine are a good match for the strains that show up; other years—not so much.

The occasional mismatch is not surprising, given the selection of each year’s virus strains has to be made months in advance: late-February for vaccines developed for the northern hemisphere, and late-September for vaccines developed for the southern hemisphere. (The selections are made by influenza experts meeting at the World Health Organization and are based on surveillance data provided by countries around the world.)

Another reason you might develop the flu despite having been vaccinated: if you’re older, your immune response (to the vaccine) may not be as robust as it is in a younger person. So, immunity may wane across time, leaving you increasingly susceptible to the virus as the season progresses. That possible reduced response is the reason behind the higher-dose vaccines developed for people over the age of 65: the higher dose vaccines may provoke a stronger response.

The limited duration of the immune response to the vaccine, and the differing composition of the vaccine from one year to another (to accommodate differing viral strains of the disease), mean that it’s important to get a flu shot annually. Vaccination for flu, unlike vaccination for some other viral diseases, is (sadly) not a case of “one and done.”

For the 2019-20 season, there are multiple versions of the flu vaccine available:

The reason for the more-restrictive use of the nasal spray is that it contains live—though weakened—virus. Consequently, it should be avoided by those who are immunosuppressed—due to either illness or treatment of an illness—and by those who care for people who are immunosuppressed. As there also are other conditions, such as certain chronic diseases, which may argue against the use of the nasal spray vaccine, people considering it should discuss their vaccine options with their health care providers.

Although flu vaccination is recommended for almost everyone age six months or older, there are people who should not be vaccinated. This includes people who have had a severe, life-threatening reaction to a prior flu vaccine or to any of its ingredients.

There also are people who should talk to their health care providers before getting a flu shot; this includes those with a less-than-life-threatening allergic reaction to eggs or to any ingredient in the flu shot, and those who have ever had Guillain-Barré Syndrome.

If you’re thinking you’ll skip vaccination due to cost, please reconsider. Vaccination against flu is covered by most insurers, often with no co-pay. Many local organizations offer no-cost flu vaccinations (e.g., on October 9, CAMP Rehoboth partnered with Beebe Healthcare to provide free flu shots to anyone in the community who was age 18 or older) and the Delaware Division of Public Health operates flu clinics throughout the state (details at: https://www.dhss.delaware.gov/dph/fluclinics.html).

Maybe you’re thinking you just don’t have time? Oh, sure you do! Vaccination is easy to “schedule,” as many pharmacies offer it on a walk-in basis. Combine a trip to the grocery with a stop at the store’s pharmacy, and you’re done.

Still ambivalent about getting the vaccine? Maybe a few statistics will help you decide. In Delaware, during the 2018-2019 flu season:1

→ Statewide, 6,387 people had laboratory-confirmed flu.* Just over one-third of those (36 percent) were in Sussex County.
→ Over a thousand (1,051) Delawareans were hospitalized due to flu-related conditions.
→ Twenty-four Delawareans’ deaths were related to flu.

Convinced? We hope so. Unless you’re among the very small number of people who should not be vaccinated, please get a flu shot!

Want to follow Delaware’s flu cases for the 2019-2020 season? Weekly reports will be posted at: https://dhss.delaware.gov/dph/epi/influenzawkly.html starting in October.

Want to know more about flu in general? Go to cdc.gov/flu. ▼