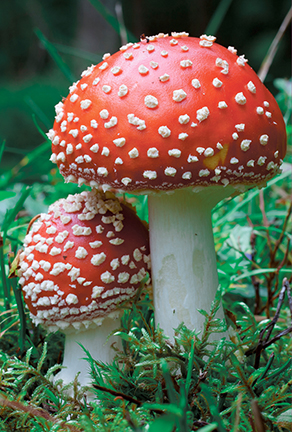 Monsters in the Garden

“The gorgeous flowers have a smell, That causes one to feel unwell.” Edward Gorey, The Evil Garden

I love writer and illustrator Edward Gorey, from the opening of PBS’s Masterpiece Mystery to the Gashlycrumb Tinies: A Very Gorey Alphabet Book. When I came upon The Evil Garden, I literally stood in the store spellbound and read it cover to cover. It’s a delight, not just for the rhyming cadence that easily drips off the page, but also for the story’s staging in the garden, of course.

I am also reminded of a valuable piece of advice given by one of my horticultural professors: it’s better to eat an animal you don’t know, than a plant you don’t know. This is because the number of plants out in the wild that can inflict severe damage to one’s body is astounding. The wondrous thing about plants is not only how some have evolved to have a symbiotic relationship with specific insects, but also the many that have toxic parts that help them survive the ages.

The most common evil plants we all know would be the plants that can cause irritation to the skin if their plant parts rub against us. Poison ivy, poison oak, and poison sumac come to mind. However, some nettles and even trumpet creeper can cause similar irritations.

Once, when I was younger, I was looking for natural décor to place in my first apartment. It was wintertime, so the leaves had already fallen. I spotted a thick vine with beautiful white berries hanging near a bridge that crossed our creek. I got out my hacksaw and took a few limbs. The sawdust got everywhere—hands, under my jacket sleeves, face, lips, and down my neck.

Well, now I know what poison ivy looks like in the wintertime. I also came to find out that its branches are most poisonous in the winter because all the sap is being stored there rather than in their leaves. The more you know….

Then, there are the plants which, if ingested, can cause much internal discomfort and sometimes even death.

American yew’s seeds, within its red, berrylike fruit, along with its leaves, contain taxine, an alkaloid that damages the heart. Yews are common foundation plants as they are evergreen and are attractive all year. But avoid the seeds.

Hollies are a common garden plant just like the yews, because of their evergreen characteristic and their showy berries. Be careful of the berries though, as, if ingested, they are known to cause vomiting and diarrhea. They can affect your pets as well, so just be aware of what your beloved animal gets into.

Horse chestnut is a large tree with spikes of beautiful blooms in spring. Buckeyes are a related species with a similar appearance. Both have a nut inside a thick husk. All parts of the tree are toxic, and the nuts should never be eaten. It’s Ironic that the candy called Buckeyes is one of my favorite sweets and resembles the nut of the horse chestnut tree.

Hemlock—the biennial, not the tree—is a poisonous herbaceous plant that can cause paralysis and death. Socrates died from drinking a brew made from its leaves. It has fern-like foliage and flat-topped white flower clusters. The stems are smooth and spotted with purple.

Of course, a plant with a name like nightshade is bound to have a dark side. There are many nightshades out there. Their berries can be fatal if eaten in large quantities. They can be a bushy plant or even trailing vines, but they all have beak-like yellow anthers in their flowers.

I’m sure many of you are familiar with pokeweed, which can be found almost anywhere. It’s red stems and purple-black berries are obvious in autumn. The roots, seeds, stems, and leaves are all poisonous. Steer clear of this one and remove it from your garden. Birds will spread the seed easily.

I think I’ll end this monster bash with mushrooms. There are so many species of mushrooms, and I am no mycologist (someone who studies fungi). All I know is that there are tasty ones and there are deadly ones, and I’ll just trust that the ones on the grocery store shelf are safe.

Be aware that evil lurks in the garden and some things that are the most beautiful can also be monstrous. And if you find yourself lost in the woods or stranded on an island…it’s better to eat an animal you don’t know, than a plant you don’t know.