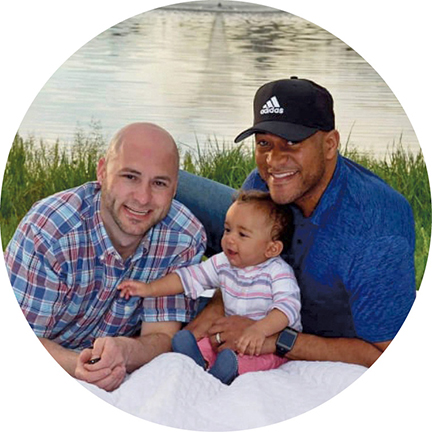 A Path of Their Own

Leaving our town of Rehoboth and driving south on Route 1, about 25 miles inland is the town of Selbyville. Within this small town is a quaint downtown area offering a beloved library, a post office, and a few businesses. Pressing towards the outer town limits, there’s more to do and more buzz. And by welcoming LGBTQ individuals and couples, Selbyville is an example of the widening circle of gay-friendly areas in Sussex County

Brandon Tatum-Poole, originally from northern Georgia, opened Vogue on 54 Salon and Spa in 2015 and has since doubled his square footage in an effort, due to demand, to offer nails and massage as well. His passion doesn’t end at cosmetology, as interior design comes in as a close second.

So this past July, 37-year-old Brandon decided to take the plunge into retail and open a home décor shop in downtown Selbyville, featuring a mix of modern and rustic unique finds. None of this would be possible without Brandon’s business partner, Darren Tatum-Poole by his side.

Brandon is grateful that his business partner also happens to be his husband. It was Darren who encouraged Brandon to attend cosmetology school. While Darren works in banking, he is also certified to help at the salon and is a veteran who served in the US Navy for four years.

The two admit they met in a romantic comedy way, striking up a conversation in a bookshop in Virginia in 2011. It wasn’t long till both wanted more than a long-distance relationship. One month later, they moved in together in Virginia, and have been together ever since. They moved to Delaware seven years ago, getting married in 2016.

The two have many things in common but their coming out stories couldn’t be more different. Darren, 37, originally from North Carolina, describes it as smooth and doesn’t recall making it a big announcement. He just embraced who he was and his family supported him.

Brandon was met with slight resistance coming out in his small town in Georgia but smiles how the once bumpy road is now a smooth red carpet, much like the one they used at the grand opening of Vogue on 54.

“Delaware is home to us now,” said Darren. “We appreciate that Delaware has accepted us.”

After planting roots and buying a home in Selbyville, the couple began dreaming and planning of having a family. After a fun-filled “foster to adopt” shower at their salon, they began their parenting journey by fostering seven children of various ages in seven months. While the experience taught the couple many lessons and was unforgettable, at the end of those whirlwind months, the two knew that fostering was not for them.

After months of hoping to expand their family, cheered on by friends and relatives, an adoptable baby came to them. Their now one-year-old son, Micah, is their constant ray of sunshine.

“We could’ve never planned for any of this,” Brandon said. “We only prayed for it. It made us believe that there is a plan.”

Micah is surrounded by a large family, friends, and many friends who are like family. He will soon call his dads Papa and Dada and they are prepared to support him and answer any questions he may have.

Brandon and Darren feel that their every dream has come true and plan to keep dreaming. Next up for the two fathers is expanding the salon to the Long Neck area. Vogue on 24 is expected to open this winter in a 4,000 square foot space offering hair, massage, and home décor.

“Being a business owner is the quintessential American dream,” Brandon said. “The reality is that with a good work ethic your dreams can come true.”

At the core of completing their American dream is their bright-eyed son Micah.

“Micah will grow up with the support of two loving, dedicated fathers giving him concrete advice, while also allowing him to find his own way in life,” Darren said. “We will tell Micah how he became our son and how hard we prayed for him and continue to pray for him. He deserves the best in life, starting with his two fathers setting the tone of honesty.” ▼