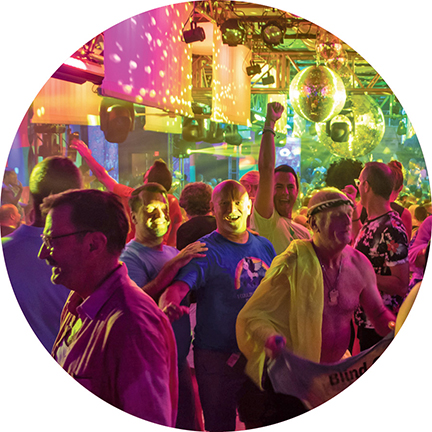 The Power of Love!

Thanks to every single person—volunteer, host, supporter, sponsor, staff, board, donor, attendee—another spectacular Sundance was celebrated over Labor Day weekend. We had so much to be happy about, and one texted comment sums it up: “It was awesome—a sea of joy last night from one end to the other!!”

Anniversaries give us an opportunity to look back from where we’ve come and to rejoice for the future. For this 32nd Sundance, we were delighted to have David Mariner with us both nights, and to show him what a supportive community embraces the work of CAMP Rehoboth. While the whole weekend is our favorite fundraising event, the dance stands alone as an event we cherish.

We made a lot of small changes this year, improving on a formula that already works. Most notably we implemented tweaks to the auction night suggested by our auctioneer Lorne Crawford: earlier hours, fewer tickets, and a smaller number of items. The night sold out in advance, the room was still full but not crowded, and we were able to raise as much money as previous years, or more!

For the dance, we also sold out of advance tickets. It was a packed floor all night, but never overly so. Yes, there were times we were hotter than the AC could manage, but, hey, it’s true! We were smokin’!

The whole crowd leapt to “Jump!” and “Gloria” and my heart nearly burst when “I Just Wanna F***ing Dance” was Robbie’s next to last song. As the dancefloor transitioned around 10 p.m., and Joe played “This is Me,” the crowd went and came so fast that if you blinked you missed it. It was a decidedly different, younger, shirtless, male crowd—with smiles as broad as a rainbow and having fun. There was so much posting on social media, at least at one point we overwhelmed the data channels!

We brought Disco Lottery back. A dozen people submitted songs they hoped or thought the DJs would play. Some submitted whole lists and who am I to argue? We had some triple winners, something that has never happened before. Thanks to John Bratton, Peter Garneau, Bob Ramsey, Mary Beth Ramsey, Jack Morrison, Roger Lee, Mike Reimer, Frances Barnes, Wes Combs, Heinie Lund, and Bob Dobbs for playing. There was a lot of gloating! Of note, John Bratton earned his PhG (Doctor of Gloatology) for his excellent skillz in this area. Every submission is listed below as the start of your next playlist; the number indicates if more than one person submitted the title.

Next year is CAMP Rehoboth’s 30th anniversary as an organization. Sundance awesomeness will ensue. Consider yourself warned. #thepoweroflove ▼