Face it, a pontoon boat is a floating great room—a little unwieldy to steer but by and large a sweet ride. 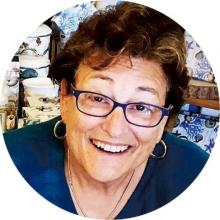 The Same, Only Different

We were serious boaters.

Once upon a time, without a shred of trepidation, we crossed Delaware Bay in a 28-foot cruiser, came out of Cape May into the ocean, hung a left and cruised up to New York City. We lived on our boat in Dewey, braved rough seas, traveled the Intercoastal Waterway and survived the Indian River Inlet. We were foolish, fearless and without adequate sunscreen.

Decades later, here in Florida, we made a rookie mistake in a pontoon boat. Oh how the mighty have fallen.

We met our first challenge renting the boat. Handed an iPad, we had to read all the horrid things that could happen to us or the boat for which the rental company would not be responsible.

Worse, the iPad snapped our photos as we each signed consent. Nobody looks good after reading about their drowning death. And I was surprised the screen fit all my chins.

“Why do they need our pictures?” asked one of our crew.

“To identify the bodies,” somebody surmised.

Next, our octet of women of a certain age, stepped carefully onto the boat. Then, we produced more tubes of sunscreen than available at Walgreen’s. We couldn’t cast off until each of us looked like a pasty-faced mime. 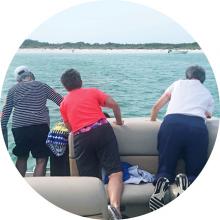 And the clothing! Years ago it was a bathing suit and a visor. Now, despite sunshine and 77 degrees, it was sweatshirts, long sleeves, and long pants. Only Captain Bonnie wore a bathing suit under her shorts and t-shirt. From the looks of it, the rest of us were going ice fishing.

So okay, once underway the wind picked up, making for a choppy but fun ride. Face it, a pontoon boat is a floating great room—a little unwieldy to steer but by and large a sweet ride. We marveled at mansions on the water, dive-bombing pelicans, and way too many docks flying Trump flags. Yuk.

Deciding to anchor off the beach to go shelling seemed an easy choice. I tossed the anchor out, feeling a pinch in my rotator cuff and marveling at how much heavier the chunk of metal was than anchors of old.

As the anchor tried to take hold, the wind caught our floating hospitality suite and carried us directly over the settling anchor. Uh-oh, now 25 feet of anchor line (that’s rope to you non-boaters) wrapped itself around the propeller.

I flashed back to the staggering amount our pre-cruise paperwork said it would cost us if we damaged the prop and glared glumly at the captain. “Okay, I can fix this,” she said, shutting the engine down, flinging off her shorts and t-shirt, and scampering down the swim ladder into the water. 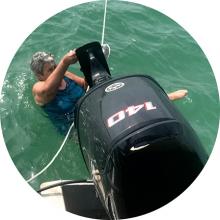 The amazed peanut gallery put down their flavored waters, moved to the rear of the boat, and stared at the captain, now hanging onto the motor like a Cirque du Soleil performer and unraveling the anchor line from the prop.

“Is it freezing?” asked a bundled-up passenger.

“I can’t believe she went in!” said another.

“Glad it’s not me,” thought everybody else.

Whereupon the AARP audience cheered as the captain expertly freed the prop from the anchor line, causing nary a scratch to the machinery, then scampered back up into the boat. We all agreed that none of us would have willingly splashed down, and in fact, we were not sure any of us were even capable of scaling the ladder back up into the boat.

I flashed back to the 1980s and 90s, a period I refer to as “my life as ballast,” doing all the crazy things required to live on a boat, dock a boat, and otherwise athletically leap onto piers and jump up and down on the bow pulpit to free us from sandbars.

We’ve come a long way baby, into a new century, on dry land, and abject geezerhood.

But, Captain Bonnie? Still crazy after all these years. Yay.