”The love of gardening is a seed once sown that never dies.” ~ Gertrude Jekyll

Known for her attention to color and for massing plants for maximum impact, Gertrude Jekyll was a force to be reckoned with in the horticultural and landscape design world. Designing over 300 gardens, mostly in the United Kingdom but some in France and in the United States as well, she influenced many designers and artists that came after her.

Talented in numerous fields, including art, photography, and writing, Gertrude Jekyll not only designed gardens but also published books and developed her own photography. A master in every field she practiced, she is perhaps best known for the English style gardens that she created. 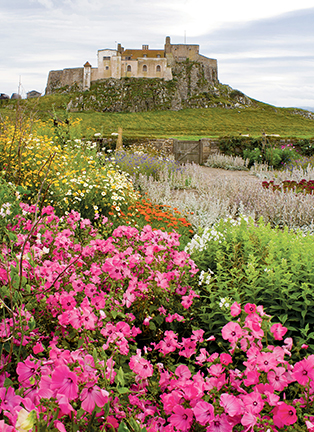 I’d like to spend some time talking about her use of two design elements she employed throughout her work: color and mass, as evident in her gardens at Lindisfarne Castle, shown here. Perhaps no other design elements, when combined, produce such dramatic results. Small gardens as well as large benefit from the marriage of these two principles.

When working with color, there are many ways to express it in the garden. One can have a monochromatic scheme where one color is emphasized throughout the yard. This can be accomplished with both flower color and leaf color. For example, a white-themed garden can be expressed by using numerous flowering shrubs and perennials that bloom shades of white. In addition, there are many types of plants that have variegated leaves, or leaves that have differing tones in their colors, some that include white streaks. Other plants have a greyish hue to their leaves that can be combined in this color theme.

Color can also be used as a progression in the garden. Since certain plants have their own cycles of bloom time, one can plan a garden for the most impact during specific times of the year. Typically, spring blooming flowers are cooler hues of blues, whites, purples, and pinks. Summer flowers are usually warmer, with yellow, reds, and oranges. These tend to overlap in the autumn months with the addition of earth tones from the changing leaf colors. There are exceptions to this, but if one observes the garden over time, there is a definite pattern to the colors coupled with the changing seasons.

Massing plants in the garden also plays a big role when it comes to impact. You may have noticed someone’s front yard as you drive or walk by and always say how beautiful or impressive it is. It may be due to them having massed shrubs and perennials that force your eye to move through the space from point to point, and resting for a bit before moving onto the next. When there are too many individual plants competing for the eye to see, it becomes chaotic.

Combining these two elements, color and mass, guarantees a statement in the garden. Think about grouping shrubs in odd numbers, like three Pinky Winky Hydrangeas or five Sunburst St. Johns Wort. By grouping similar shrubs together, the garden fills in much faster and the structure of the garden will take shape. Grouping perennials is probably the easiest and least expensive way to fill in the garden. Groups of five, seven, or more plants like blackeyed Susan, Siberian iris, hosta, or phlox will provide big impact and also help to cover the ground plane, which will help to suppress weeds.

This spring, try combining these two elements of design in your own yards and watch your neighbors stand a while on the sidewalk while enjoying your garden oasis. Stay safe, and let’s garden together!##

Eric W. Wahl is the Landscape Architect at Element Design Group and President of the Delaware Native Plant Society.