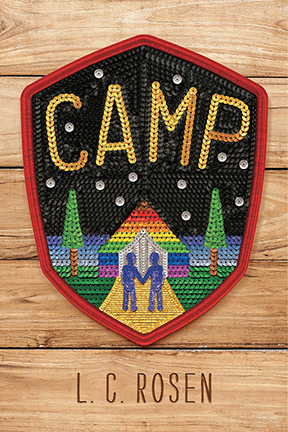 You didn't need the extra heat.

No, the evening was balmy; it had been all day, but you needed to watch the embers. There's something about a campfire that's relaxing, isn't there? Something romantic about it, too, which means things can heat up or, as in the new novel Camp, by L.C. Rosen, things can go all up in flames.

Sixteen-year-old Randall Kappelhoff had been thinking about his plan all winter.

This year at Camp Outland, a camp for queer teens, everything would be different. He'd cut his hair and change his name—no more "Randy," he'd be "Del" at camp. He'd act totally masc, sign up for sports, and he'd reluctantly give up performing in the annual play. And at the end of the four weeks of camp, Hudson Aaronson-Lim would be Randy—um, Del's—boyfriend.

He'd been hot for Hudson every summer for years. This plan had to work.

And it does. At first.

Hudson is everything Del wants: he's solid, sweet, and his kisses are ah-may-zing. And as much as Del wants to "get naked" with Hudson, he knows he has to wait. Every past summer, while he lusted after Hudson, he watched Hudson find some random boy, let the boy fall in love with him, and then he'd dump said boy within two weeks. That was not going to happen to Del. Hudson would be permanent; he just didn't know it yet.

But staying in character was not easy. Del's cabin-mate, George, brought nail polish to camp but while Randy would wear nail polish, “Del" could not. Everyone in Del's cabin was really into theatre and they were all looking forward to the camp show but "Del" was too masc for singing and dancing. Still, Hudson was worth it.

Almost everyone in camp knew about Del's rom-com plans—everyone, that is, except Hudson. Del knew that he'd eventually have to tell Hudson the truth but by that time, he was sure Hudson would be in love with him and nothing else would matter.

The plan had to work.

Okay, this: Camp is adorable. It's all puppyish first love and awkward kisses and fumbling virginity loss. It can also feel long.

That may be the first thing you notice, since author L.C. Rosen jumps right into the beginning of Randy's first week at camp, and the plan. That doesn't leave much literary foreplay and it makes for a rough opening; fortunately, it doesn't last and it doesn't drag.

To the good, the teen angst inside this book is perfect, as is the authenticity of its language. There's also a great mix of LGBTQ characters. But the story's neon-sign is the thing most readers will celebrate: to wit: be true to yourself...but be careful.

Read the book. As if the ending of it isn't surprise enough.

Beware: this is a cute story with a strong message, but also contains some pages of explicitness. For older queer teens who need to read, though, Camp is just right, with a little heat.