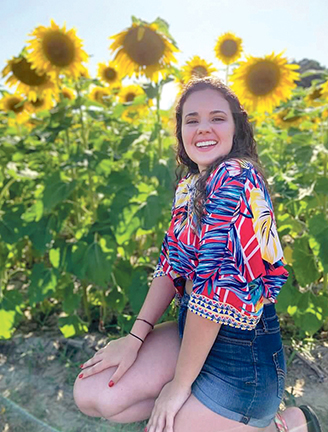 Nothing Short of Average

For my whole life, I have identified as a cis, straight female. I use she/her pronouns, have and always will find men attractive, and am quite in love with my feminine identity. I am nothing short of average. Which is why I never expected that by the time I turned 20 my closest friends would be calling me bisexual or a lesbian, my parents would tell me I had come out to them, and my ex-boyfriend would think I left him for a woman.

My first introduction to college was rough. After a couple of months of struggling, I finally found my group of friends. The leader of this group was Pep*, a proud and strong-willed lesbian who had been out for a few years by now. Pep and I clicked immediately. We were best friends from the start, and often snuck away from the others to go watch a new show on Netflix together.

There was really no surprise to anyone when a year and a half later Pep and I began dating. The problem was no one knew that a few months before, Pep came out as trans to me, and only me. He was now a straight man and quite my type. It was easy for us to get together. It was harder for me to allow my friends and family think I was gay for months when I was not.

I found it extremely frustrating. I felt like a fraud, pseudo joining this fantastic community only to avoid outing Pep’s identity. My close friend, who is bisexual, was so relieved because she finally had another bisexual friend. People were excited, proud, exuberant, and every happy adjective you could imagine. My parents believed my new relationship was a way of coming out and my ex-boyfriend was more confused than ever thinking I was a lesbian.

It was this time period of allowing people to believe what they wanted about my sexual identity that set up what I found to be the most difficult part about dating a trans person: everyone believes they can assume my sexual orientation.

After Pep came out (and has since changed his name to Grayson), there were no hard feelings. My friends understood, and everything went back to normal. But there began a pattern with strangers, coworkers, and even family members that believed I was one of the many different identities in the LGBTQ+ community.

People call me a lesbian because Grayson hasn’t begun surgical transition. Coworkers think I’m bisexual for much the same reason, but also accounting for my interest in men. Others claim I am pansexual, or don’t see gender, simply for the fact that I am dating a transgender person. At the very least, I’m sure most people believe I am questioning or discovering my sexual orientation now that I am dating a trans person.

And while those months in which I allowed people to believe what they wished were hard on me, straining my relationship with quite a few people, they were harder on Grayson, who was trying to navigate the world in a new way. While people assumed my sexual identity, everyone assumed his gender identity. Being called gay or bi does not detrimentally hurt me in the way being misgendered hurts Grayson.

It may be frustrating, even more so when someone argues my sexual orientation with me, but it can never reach the extent of pain and trauma Grayson goes through every day. Which is why I would do it all over again, a billion times, if it meant allowing him the time he needed to explore without constraint, without judgement, and without pain.

Those few months marked a difficult time in my life. But at the same time, I had my best friend next to me, and I got to watch him find happiness and joy in his acceptance of his identity. And that I would never trade for anything.

Barbara Antlitz, CAMP Rehoboth Youth Coordinator, works with Genders & Sexualities Alliances (GSAs) in middle and high schools in Kent and Sussex Counties, and with other groups supporting LGBTQ+ youth. Barbara can be reached by email at bantlitz@camprehoboth.com.