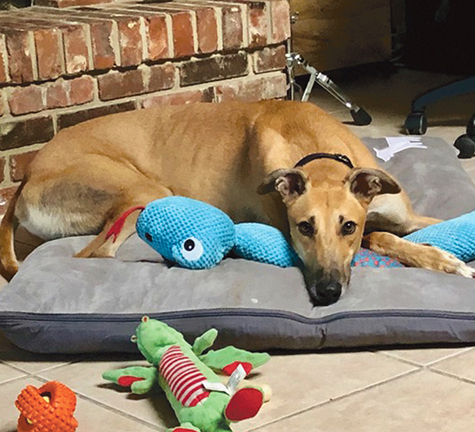 The Dog Days of Summer

It’s hard to believe the Dog Days of Summer are upon us again, although given the heat waves of July, it would seem Sirius, the constellation—not the satellite radio—got here a bit early this year. And while temperatures soar, and COVID surrounds us, sometimes it might be a struggle to remember when summer was just sand, sun, fun(land).

Like many people, this summer of staying home, dining in, and binging too much TV opened up a different door for me. For the first time in too many years, a four-legged “child” walked in to roam the hallways and keep us wonderfully entertained. His name is Finn, he is two years old, weighs 75 pounds, and is a retired greyhound.

Apparently 16 months of training and evaluation weren’t enough for Finn, because the first time the gates opened, six dogs shot out, furiously racing at speeds reaching 45 miles per hour, speeding for the finish. The seventh dog, the one in the very bright lime green vest, loped along, taking time to smell the roses, and God only knows what else. When the race was over, there was a win, place, show, and a “just not interested.”

Greyhounds coming off the track are incredibly sheltered and both uproariously and scarily naive. Try taking 75 pounds of dog and teaching it how to climb into the back seat of a car. Turns out male greyhounds live on the bottom row of crates at a track. They do not jump. They do not do stairs.

So, we open the car door, Finn looks at it, looks at us, nothing. We put two paws up, he takes two paws down. We split up, Nancy going to the driver’s side, leaving me with Finn on the passenger side. She calls, coaxes, cajoles. I lift up paws. Then slowly, I reach back, find the end of this long lank of dog, and nudge. Success! We now have a sphinx stretched out across the back seat.

On the bright side—to all you shepherd (German or Australian), weimaraner, bernie mountain, and yes, schnauzer parents—because he doesn’t jump, he doesn’t know he can climb on a couch either. We’re not telling him.

Other greyhound challenges include vocabulary—they are “greyt” hounds (an endearment); they chatter—teeth chattering as though cold or scared, but they’re just letting you know they’re so happy to see you, literally vibrating with excitement. They nit—a sign of affection, where in the dog’s tiny front teeth move in a fast chomping motion against their beloved's skin. This varies from adorable to excruciating depending on location on your body. They also bow, which is way better than my yoga downward dog, and they do zoomies.

Zoomies are not to be confused with Zoom calls, where we try not to make visible faces whilst chatting with a group of people. Zoomies are when a snoozing dog suddenly wakes up, and takes off—running in circles, figure eights, and hitting 40-plus miles per hour in your back-yard straightaways, highlighted by double suspension gallops (wherein all four feet are suspended in the air). It’s thunderous, fantastical, and highly entertaining. Because they know they are putting on a show.

My greyt hound is a diva—a very sensitive diva. Imagine playing Iditarod. In your (insert breed here) case, they will happily pull you around through the snow, relishing how the crowd cheers for you. In Finn’s case, he will gladly sit in the seat and allow you the opportunity to pull him around the track. It is all about him.

But greyhounds have one more secret weapon. They actually smile. They have this way of lifting their front lips and showing their teeth, while their entire body wiggles, and well, we are in love.

Maybe there’s a pet waiting for you at Brandywine Valley SPCA—the organization which made Delaware the first, and still only, state recognized as a no-kill state. It’s adopted out 482 animals in need—from the Georgetown campus alone.

Bring some love home and then you, like me, could give your own dog days of summer a brand new meaning,