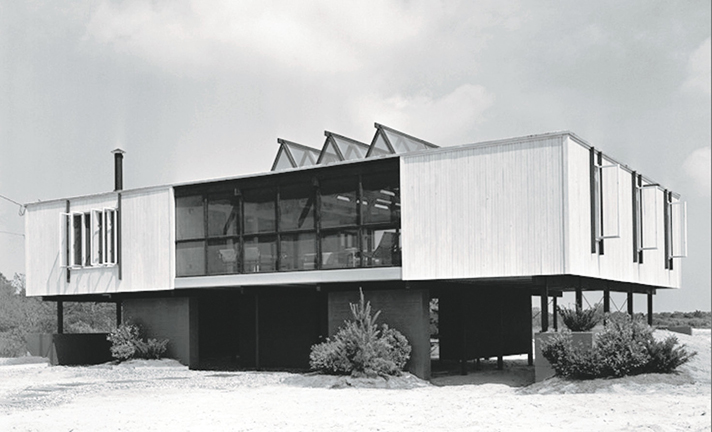 The old black-and-white photo showed a modern beach house on an open, sandy lot somewhere in Rehoboth, its tall casement windows open to catch the breeze. The single-story box, raised on pylons, had two flat-roofed pavilions clad in vertical siding that flanked a screened-in central space with a saw-toothed screened ceiling hovering above.

The structure seemed not to have been built from the ground up but lowered delicately from the sky. The photographer posed it just so, bringing out its simplicity and the bright beachiness of the day. It is a scene of serenity and ease.

The photo, from 1963, had me hooked. A friend in Bethany Beach sent it to me after I wrote an article for Letters on why folks in Rehoboth frown on contemporary architecture (in contrast to my own affection). She thought I’d be intrigued by this example, unknown to me, and I was.

Pedro E. Guerrero took the photo. Guerrero (1917-2012) is known for his masterful images of Frank Lloyd Wright and his buildings. He went on to serve for 20 years as the architect’s chief photographer.

Who was Bruce Graham? Another notable architect, apparently, since Guerrero documented this sample of his work. To my surprise, I learned that while Graham (1925-2010) may not be a household name à la Wright, many of his buildings certainly are, especially the renowned Sears Tower in Chicago, a 110-story colossus built in 1973 and until 1998 the world’s tallest building. (It’s now called the Willis Tower.)

Among his other well-known commissions was the John Hancock Center (1970), the dramatically X-braced and tapered skyscraper on North Michigan Avenue that Chicagoans call “Big John.” Graham designed many other buildings in Chicago as well as nationwide and abroad.

What a catch for Rehoboth! The man who added so much to Chicago also made a mark on our Delaware town—small, perhaps, but enlarged by worldly association.

But three questions nagged me. First and second, did the house still stand—and, if so, where? I looked just outside Rehoboth in North Shores, which boasts a few modest mid-century-modern survivors. I drove down the winding roads there, fruitlessly at first. But one day, retracing my steps, came my eureka moment. There stood the unmistakable floating box. But a very different landscape had taken over. A tall stand of evergreen and deciduous trees now embosomed the house, and the sandy ground was thickly coated with pine needles. No wonder I missed the place.

The house had changed, too. The position of some windows had been altered, the flat roofs were now low and hipped with overhanging eaves, new siding had been applied, and a lower-level front wall wore a paneled colonial door at painful odds with modern understatement. Yet the dwelling’s bone structure and dignity had survived intact. The screened-in atrium, to my amazement, had not been glassed over.

Then came the third mystery: Why would this prominent Midwestern architect design a vacation retreat so far from home? Back in the 1960s, I’d guess, even some Easterners thought Rehoboth remote. And southern Delaware was no hotbed of seaside modernism. Furthermore, why would a designer of tall beefy buildings produce a dwelling so horizontal, so serene, so undramatic?

Maybe this Bruce Graham was not “the” Bruce Graham. So, I dug deeper. The person who gave me the photo knew Guerrero and his wife, architectural historian Dixie Legler Guerrero, and suggested I check with her. Bingo! Legler Guerrero confirmed this was indeed the famous Graham. “Pete said this was Bruce Graham's vacation house,” Legler Guerrero said, “and Pete flew with him in his private plane to shoot it. Pete also shot his apartment in New York City.”

So, what did later owners think about this uncommon place? Who made the alterations? It’s fascinating just to consider the furniture and appliances that may have come and gone, their trendiness blooming and fading. (And blooming once again, since mid-century-modern design has become all the rage these days.)

It’s been more than half a century since Guerrero snapped the shutter on a lovely beach house that has taken me, years downstream, on a captivating trip.##

Arnold Berke is a writer living in Chevy Chase, Maryland, and Rehoboth Beach.