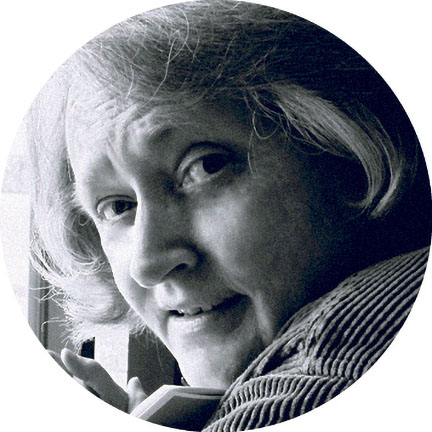 LGBTQ writers Ellen Hart and Fay Jacobs are two scribes at the same stage in their careers. Ellen has written what is possibly the last of 26 Jane Lawless mysteries (even winning the prestigious Mystery Writers of America Grand Master Award for them) and Fay Jacobs is wrapping up 26 years of her CAMPout column in this issue. They chatted recently about having fewer deadlines and more time for other projects.

Fay: Hey, Ellen, rumor has it In a Midnight Wood may be the last Jane Lawless story.

In this Letters issue I’m also ending a series. It’s time to give up the deadline pressure, but I have mixed emotions. What’s gone into your decision to retire Jane Lawless, and can you tell us your feelings about that? How do you say goodbye?

Ellen: It was a very difficult decision for me, too. I mean, I can write another book. My editor has offered me a two-book contract and said she would keep the offer open indefinitely.

But I think it’s time. I don’t have the same fire to write that I used to, and frankly, I’d like to spend some time reading, relaxing, not having a deadline looming. The idea that I’ve written my last story about Jane and Cordelia truly hurts, but I believe I sent them off into the world with a last book that puts them, mainly, in a good place. But I guess it’s never say never.

Fay: I feel that way too. Maybe the new Letters editor will want a guest column from me occasionally. But now I can do other projects and re-read my favorite Jane Lawless books. How did you come up with the character? Was it based on your former profession as a chef? Have you ever done any sleuthing yourself?

Ellen: In the mid-eighties, I began to think I’d like to try writing a novel. I loved mysteries, so I wrote about 200 pages before I realized I had no idea what I was doing. Then, I spent one winter reading PD James novels, taking them apart and trying to understand how she paced, created characters, set scenes, used foreshadowing, plotted.

I condensed each chapter into what happened, what characters were involved, what new information was conveyed. I began writing again the following fall, with an idea which evolved from my job at the time—kitchen manager at the Delta Gamma sorority.

I set the book there because I knew it so well. My partner and I had just gone to the local “Take Back the Night” march and noticed a sorority member wearing a lavender sash, meaning she was a lesbian. I knew she wasn’t out at the sorority house, so an idea began to take shape. And I was off and running. (And no, I’ve never done any real sleuthing myself.)

Ellen: Cordelia was initially meant to be, shall we say, the salt in the book. But rather quickly I came to see that she was more important than that. For one thing, my editor said things like, “We haven’t seen Cordelia for a couple of chapters. Don’t you think it would be good to include her?” I got the point.

One of the things that always draws me to people is a sense of humor. You’ve done stand-up, sit-down (I love that), and written humor. I don’t think the average person realizes how hard it is to write humor. Where did the humorous way you look at the world come from? Who were your influences?

Fay: My father always said, “Nothing is so bad if it’s worth the story you can tell.” He was my inspiration to see things humorously. I learned from Erma Bombeck, playwright Neil Simon, Jerry Seinfeld, and in her early stand-up, Rosie O’Donnell.

Also, a lot of my early writing, about feeling “other,” coming out, discrimination Bonnie and I faced, had me writing humorously about it, rather than letting us be damaged by it.

When I started my column, I never thought I’d break out of Rehoboth, but I did, and not just for queer readers. It’s been a lovely and unexpected surprise.

When you started to write about a lesbian restaurant owner who solves mysteries, did you expect your books to break out into mainstream readership? Did you worry that your LGBTQ content would limit you?

Ellen: Boy, I hear you on that score. I assumed the lesbian main character would limit the appeal, though I did believe, from the outset, that anyone who liked mysteries could enjoy my book, unless they were homophobic. The fact that Jane was gay was one part of the book, but like Jane herself, certainly not the totality. She lived in the larger world. She was successful. She wasn’t part of some scary subculture.

That’s probably why your books appeal, too. You write about everyday frustrations and funny stories that appeal to everyone. In fact, in addition to writing you’ve had multiple careers. I’ve always loved musical theater. What drew you to theater? I’d love to hear your thoughts on directing—what that was like?

Fay: My love for musicals came from my parents taking me to Broadway in the 1960s Golden Era of musicals. For me, the theatre was a great place to hide before I came out as gay. In directing, I could express all the emotions I was swallowing in my personal life. Of course, later, when I came out, I could put all of my emotions into it—and my directing philosophy was simple—I wanted the audience to laugh, have a good time, and get involved up to their eyeballs. I love directing, collaborating with talented actors, working together on the project. I still dabble.

Of course, my biggest shock was the success of telling my stories in a one-woman show. I toured for five years until COVID brought the curtain down. But it was all a huge surprise. What surprised you in your career?

Ellen: Pretty much everything! I’ve met and had the chance to talk to people I couldn’t have dreamed of before. I traveled all over the country, not on my own dime. I enjoyed the promotion of my novels far more than I ever expected. My writing opened up an opportunity to teach, which I have loved. And the writing itself, the way it opened the world to me, was by far the biggest gift. The majority of my close friends have come through writing.

Fay: I’ve made many wonderful friends as well. In New Orleans we were both inducted into the Saints & Sinners Hall of Fame—along with writers like Dorothy Allison, Felice Picano, and Katherine Forrest. I remain completely intimidated! (But loved going out for gumbo with everyone!)

Do you know that the first-ever public reading I did was with you in Provincetown? I was terrified. Once you laughed at one of my jokes, I almost relaxed. Since then you’ve been so generous to me with advice and we’ve become friends (you’re practically a godmother to my dog Windsor!). I loved when you came to Rehoboth for our Women’s FEST.

And we’ve had one deadline after another together. How has that been?

Ellen: On the slightly negative side, the pace of writing was occasionally a problem. Commercial speed in NYC is a book a year. For many years I was writing a series both for Ballantine/Random House, and St. Martin’s/Minotaur. It felt like writing with a gun to my head. But most of the things about my career have been overwhelmingly positive.

Fay: Including your 2017 Grand Master Edgar Award from the Mystery Writers of America. What did this mean to you personally, especially winning for a career of writing about a lesbian sleuth?

Ellen: The honor stunned me, and still does. For years, I would look at the list of people named a MWA Grandmaster and count how many I had read—how much those writers had taught me. The idea that I’d ever be on that list myself never crossed my mind. The fact that the premier mystery organization in the country would grant me that honor means everything to me. I’m deeply delighted that this was the first time a grandmaster award was given to an openly queer writer.  That was sweet indeed. What’s been the sweetest for you?

Fay:  Well, the last quarter century! The gift of writing for our community has meant so much to me. Despite a successful pre-Rehoboth career, the column, which turned into books, which turned into my show Aging Gracelessly, was a whole new career I never expected. And ending my column is bitter-sweet. But now it’s time to pass along the privilege of having ink (or pixels) and a byline to others. I’m both relieved and sad to say goodbye.

Ellen: Me, as well, with Jane Lawless.

Fay: But here’s to our next projects!

Ellen: Absolutely! And kiss Windsor for me.##

You can order Ellen Hart’s and buy Fay Jacobs’ books from the shelves or online at Browseabout Books (buy local!) or find them at BywaterBooks.com or Amazon.com.