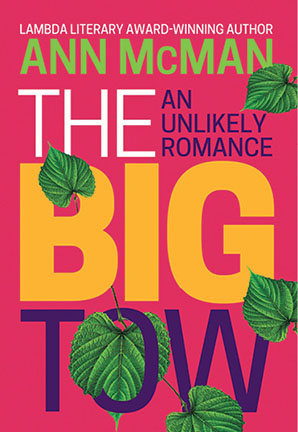 The Big Tow: An Unlikely Romance

That was your vehicle: two wheels on the ground, the other two in the air, safely attached to a bar hooked on both ends to a big truck. Oh, how you hate shredded tires, check-engine lights, busted radiators, dead batteries, and the guy with the rig, but in the new book The Big Tow, by Ann McMan, a wired starter isn't the only thing that's hot.

Vera "Nick" Nicholson had put in her time.

After six years at Turner, Witherspoon, Anders, and Tyler, Attorneys at Law, Nick thought she might've achieved partner, but no. Instead, because she was the firm's only "brown" employee and because senior partners figured "floor-scraping assignments" would be "second nature" to her, that's what she got—like, for instance, the latest case, a stolen car. Nick didn't know jack about stolen cars. She had no contacts there in North Carolina to ask for help. And that's how she ended up at National Recovery Bureau, a back-lot repo business run by a chain-smoking, no-nonsense older woman with zero patience, and a guy named Fast Eddie.

When Fast Eddie enticed her with 10 Gs in cash for "profit sharing," that was a big surprise. So was the offer of a part-time job from NRB. And so was the co-worker NRB assigned to Nick, a gorgeous blonde named Frankie. She had a killer body and enough imagination to figure out how to complete the toughest cases.

Despite the danger and the hassle, working for NRB did have its benefits: the money was great and the company was even better, and Nick cautiously allowed herself to fall in love. She and Frankie were becoming more than just partners at work; they were a couple that happened to work together, and they did a good job.

But there was something off about Fast Eddie….

Despite that it leans a bit toward wordiness and could have used maybe one less caper, The Big Tow is a true delight—but not for the reasons you might think.

Author Ann McMan's two main characters are certainly likable: Nick is one of those people you want in your corner, and Frankie seems like someone you'd have drinks with. The real appeal of this book, though, lies in the world surrounding these two. The dispatcher at NRB and Nick's gay roommate are spit-out-your-coffee funny, and you must read this book to learn who Carol Jenkins is. There are dotty mothers, wise fathers, a goth girl at a funeral home, and a Yoda-type butcher who speaks in hints. Though he's really basically a caricature, even Fast Eddie is someone you'll look for as you're reading this book.

This is the kind of story that, if it happened to you, you'd get plenty of mileage out of it at your next party. It's got romance, action, humor, and theft—how can you go wrong? Start The Big Tow and you'll be hooked.

The holidays this year are going to be, well, unique. And here's the good news: books are easy to wrap, easy to box, and easy to ship. Why not try one of these great books for that person who can't make it to your table this holiday season?

For the person who craves a thriller, These Violent Delights by Micah Nemerever is the gift to give. It's a novel of two young men who meet at college and soon become obsessed with one another in different ways. But one is cruel, the other is fearful, and you know this ain't good....

The person on your gift list who loves drag will love The Cockettes: Acid Drag & Sexual Anarchy from the archives of Fayette Hauser. It's a lavishly-illustrated 50-year anniversary look at drag and the counterculture, and it's absolutely for grown-ups.

If your giftee is a die-hard, conference-attending, never-miss-an-appearance fan, then wrap up Conventionally Yours by Annabeth Albert. It's the story of a road trip, two fierce hate-fests, one romance, and two fanboys, but who's the biggest? Wrap it up with Date Me, Bryson Keller by Kevin van Whye for double the love.

Here's something unique: They Say Sarah by Pauline Delabroy-Allard is a best-seller in France, and a skinny book that your giftee won't be able to stop reading. It's the story of a single mother who's living in Paris with her child. The woman has a boyfriend but one New Years' Eve, she meets a woman who changes everything. Pair it with something nonfiction, like I've Been Wrong Before by Evan James, a book of essays on life, coming out, relationships, and more.

Fans of biographies will want to unwrap Mama's Boy by Dustin Lance Black. Black, a screenwriter and activist, tells the story of his childhood, having been raised by a single mother who suffered a lifetime of almost-insurmountable issues, and how they came to terms with everything they'd endured together.

Another great memoir, Later: My Life at the Edge of the World by Paul Lisicky, is the story of finding a place to settle down, and watching an epidemic as it changes that newly-beloved place.

The starwatcher on your list will love Inside the Hollywood Closet: A Book of Quotes by Boze Hadleigh. It's a who's who and a what-was-what that looks back at who said what about life as a gay star, and it's fun!##