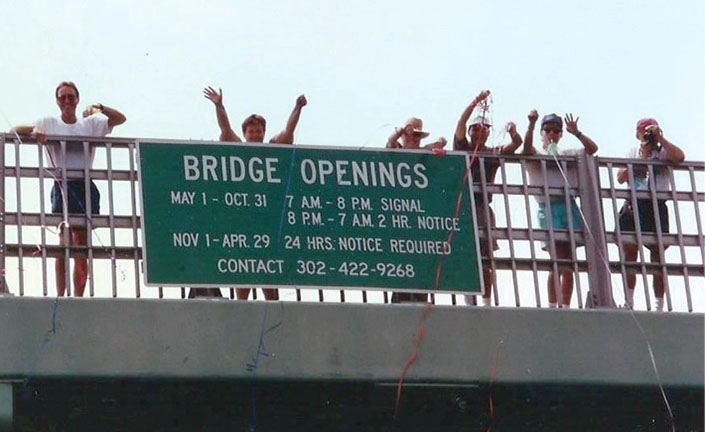 With this issue of Letters, the magazine has ended its 30th Anniversary year. In publishing, that’s quite a run. In Queer publishing, it’s a remarkable and historic run. From a four-page “newsletter” to an oft-times 120-page color magazine, the march of progress for Letters and our community has been a stunning period of growth and change. We’ve made deep and enduring connections.

It will be entertaining and illuminating to see how Letters from CAMP Rehoboth proceeds in its fourth decade and what societal changes and LGBTQ issues, along with plain old fun stuff, it covers. Lots of us have been reading Letters online during this pandemic. But it’s the beautiful print version which has played such a huge role in welcoming LGBTQ visitors to town and inviting them to become part of our community.

On the day last summer when I first met CAMP Rehoboth’s Operations Administrator Kerry Hallett, she told me, “We were visiting Rehoboth when I saw a copy of Letters and said to my wife, ‘Look, a gay magazine with drag queens on the cover!’ Then as I flipped through, I saw all the things going on and I said, ‘We could live here!’” And now they do.

Likewise, years ago, Kathy Wiz and Muriel Hogan stopped here for lunch on their way to Myrtle Beach. They ran into Kathy Weir from CAMP Rehoboth, who showed them around, gave them Letters, and told them all about the community. Completely charmed by this gay-friendly community, they wound up spending only a day or two down South, finishing their vacation in Rehoboth and eventually moving here.

I have friends on Facebook and in person who came to Rehoboth for the beach, picked up Letters, and found their community. It’s happened hundreds of times.

My friend Lana Warfield once said to me, “Two things built the women’s community here—Letters and the happy hour at the old Cloud 9.” I agree. And though we miss Cloud 9 something awful, we still have Letters (and now Diegos) to keep us connected.

And from what I’ve seen and experienced (before COVID!) at local venues, younger generations of queer people, men and women, are coming to town, to the beach, the bars, the restaurants, and finding this amazing community.

I’ve been writing about our notable community in this column, CAMPout, for 26 of Letters’ 30 years.

The first CAMPout told how Bonnie and I cruised to Rehoboth aboard our 28-foot power boat, outrunning swarms of black flies, barely sharing the C&D Canal with a big mother tanker, and narrowly avoiding running aground (”Look, Bonnie, I can see those sea gulls’ knees!”). We arrived in Rehoboth to a greeting party waving at us from the Rehoboth Avenue bridge.

This column then chronicled 1995-97 living aboard in Dewey, then trading mildew life for condo life, and in 1999 becoming Reho full-timers. I wrote of CAMP events, our careers, LGBTQ activism, politics, health crises, Sundances, CAMP Follies, Women’s FESTs, zip-lining, travel, marriage equality, a succession of Schnauzers, kvetching about technology, and a helluva lot of fun.

My columns became books, and I embarked upon a new career as a published author, touring the country for readings and book signings. Then, those readings, where people laughed at my stories, morphed into my breaking into show business at an age I might more likely break a hip. My one-woman show brought me to comedy clubs, conventions, theatres, LGBTQ community centers, and even aboard an Olivia Cruise. It was a total blast.

And from all of this, I have 26 years of typeset memories in Letters. The privilege of writing CAMPout, and being swept up, along with so many others, in the magical quarter-century of CAMP Rehoboth’s heart-filled evolution which I experienced, has meant everything to me.

But this will be my last regularly scheduled column. I’m retiring as Letters editor (I mean it this time, lol), giving up deadlines and putting this CAMPout column to bed. I’ll be just another happy reader of this 30-year strong magazine. Maybe the new editor will ask me to chime in with a guest column now and then.

So, keep reading Letters, cherish our sense of community, stay safe, enjoy the holiday season, and I’ll see you ‘round the CAMPus.

Fay Jacobs has a monthly column, April-November, in Delaware Beach Life Magazine, and you can subscribe to her musings at fayjacobsrb.medium.com