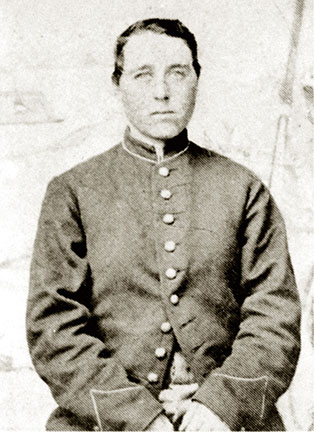 On December 25, 1843, in Clogherhead, County Louth, Ireland, Sallie and Patrick Hodgers were blessed with that most beautiful of Christmas gifts, the birth of their child. They named the child Jennie Irene. The name did not suit.

We don’t know exactly when Jennie Irene Hodgers took the name Albert D. J. Cashier, or when the youngster stowed away on a ship bound for America, but we do know that on August 6, 1862, a nineteen-year-old Albert D. J. Cashier enlisted in the 95th Illinois Infantry to fight with the Union army in the American Civil War.

Cashier was not the only soldier born biologically female but living as male to fight in the war. Historical accounts note over 200 such soldiers. After the war, some of them retained their male identities; others returned to lives as women. But I find Albert Cashier’s life to be a particularly poignant one.

At a time when surgical procedures to transition were unavailable, or indeed even comprehended, for Cashier to live as what we now recognize as a trans life was a remarkable accomplishment. It was, in fact, a heroic one.

The 95th Illinois Infantry saw plenty of action in the Civil War. They were part of the siege of Vicksburg under General Ulysses S. Grant. Cashier distinguished himself in this effort by risking his life to conduct reconnaissance of Vicksburg’s defenses. He was captured, but through luck and bravery he was able to escape and bring the information back to Grant. His heroism in the reconnoiter proved crucial to Grant’s eventual victory at Vicksburg.

After Grant’s promotion to the command of the full Union army, the 95th Illinois served under General Nathaniel Banks, seeing action at Nashville, Franklin, and other battles. Cashier’s gender was never questioned. Though he was smaller than most soldiers, so were any number of young recruits, often mere boys. Cashier’s size was therefore unremarkable among the vast numbers of men.

According to various later accounts, one of the ways he hid his biological identity was by wearing red long johns which camouflaged his menopausal blood. Any blood in the wash water mixed with the blood of injured soldiers. The regiment’s laundry detail was none the wiser.

At the conclusion of the war Cashier was mustered out of the army in August of 1865. It’s then that Cashier’s life takes on poignancy in addition to his already evident courage.

He returned to Illinois, where for over 40 years he earned his living doing various odd jobs for neighbors and elsewhere around the state. Throughout, he maintained his identity as male. In 1911, at the age of 68, while working for Illinois State Senator Ira Lish, Cashier suffered a broken leg when he was struck by the senator’s car. The break was serious, and the medical technology of the time was not able to restore Cashier’s leg to full use.

He was now unable to work, but as a Civil War veteran he was given a military pension and granted admittance to the Soldiers and Sailors House in Quincy, Illinois. His new life of inactivity, and the increasing difficulty of hiding his biological identity from the caregiving staff, caused Cashier’s mood to suffer and his mental state to decline.

In March of 1914 he was transferred to Watertown State Hospital for the Insane. The invasive practices of the era’s mental institutions finally revealed Cashier’s female physical form and genitalia. He was forced to wear female clothing. Adding to this indignity, he was investigated for what was considered the fraud of impersonating a male in the army in order to obtain the veterans’ benefits offered at the time. His military pension was revoked.

But as veterans then and now know, the bravery and sacrifice given in service to one’s country, especially under the fire of war, are not to be cavalierly dismissed. Veterans who served with Cashier attested to his Civil War service, his daring at Vicksburg. Thus in 1915, Cashier’s standing as a veteran was reinstated, his military pension restored.

The strain of the ordeal, together with his decreasing health as a result of the badly healed broken leg, finally took its toll on the infirm 72-year-old, and on October 10, 1915, Albert D. J. Cashier died. He was buried at Sunny Slope Cemetery as he would have wished: as a man, a veteran of the Civil War, buried in uniform and with full military honors.

For 55 years, the tombstone marking Cashier’s grave read, ALBERT D. J. CASHIER CO G 95TH ILL INF. But in 1970, a second tombstone was placed behind the first, this one adding BORN JENNIE HODGERS. We’ll really never know how Albert Cashier felt about that, but we can guess.