A funny thing happened on the way through this pandemic—Broadway went dark, New York’s oldest piano bar, Marie’s Crisis, moved online. But Rehoboth Beach’s Drag Queens kept the theatre mantra, “the show must go on” alive. To tell us a bit about how, and why, we’re chatting with local legend Kevin Bruice, aka Mona Lotts.

So Mona, before we get to how, tell us about the art of drag—what should people know?

Two things. The first: it’s not what you see on RuPaul’s Drag Race. Drag Race is a produced reality show. Doing drag is nothing like that. And second: the art of drag is much more difficult than meets the eye. The finished product takes hours of preparation and planning.

And also, for me, I prefer the term female impersonator. Not in an adamant sense, but as a preference. The term drag comes from Shakespearean theatre. In those days, women could not perform on stage, so female roles were played by men. And on the cast listing, it might say, “John Smith—DRAG,” meaning “dressed as girl.”

Whereas within minutes of seeing my performance and hearing me speak, you will get lost in my illusion of being a female. And that is the art. If I am performing and you forget for just a moment that I’m a man in a dress, my art is there. The same way as when I do musical theatre. For those hours, we agree I am Daddy Warbucks (Annie) or Edna Turnblad (Hairspray).

So, let’s chat some more about becoming Mona Lotts.… When was your first performance—and were you Mona Lotts then?

I was. And my first performance was in Rehoboth Beach, at a restaurant/bar called Partners, which is now Rigby’s, and the year was 2005.

And how did you christen yourself?

I was chatting with friends, sharing ideas. I was always enamored of Dolly Parton, who you may remember was the madam, Miss Mona, in the film version of The Best Little Whorehouse in Texas. Mona was “given to me” by them. So, Mona was set, but Lotts came a little later, when I was driving around and passed a Big Lots store. And that was it. It was kitschy, it played well on “Moaner,” and just completed the name.

And as there isn’t a registry, I used the spelling L-O-T-T-S to distinguish it from other versions that were out in the universe. 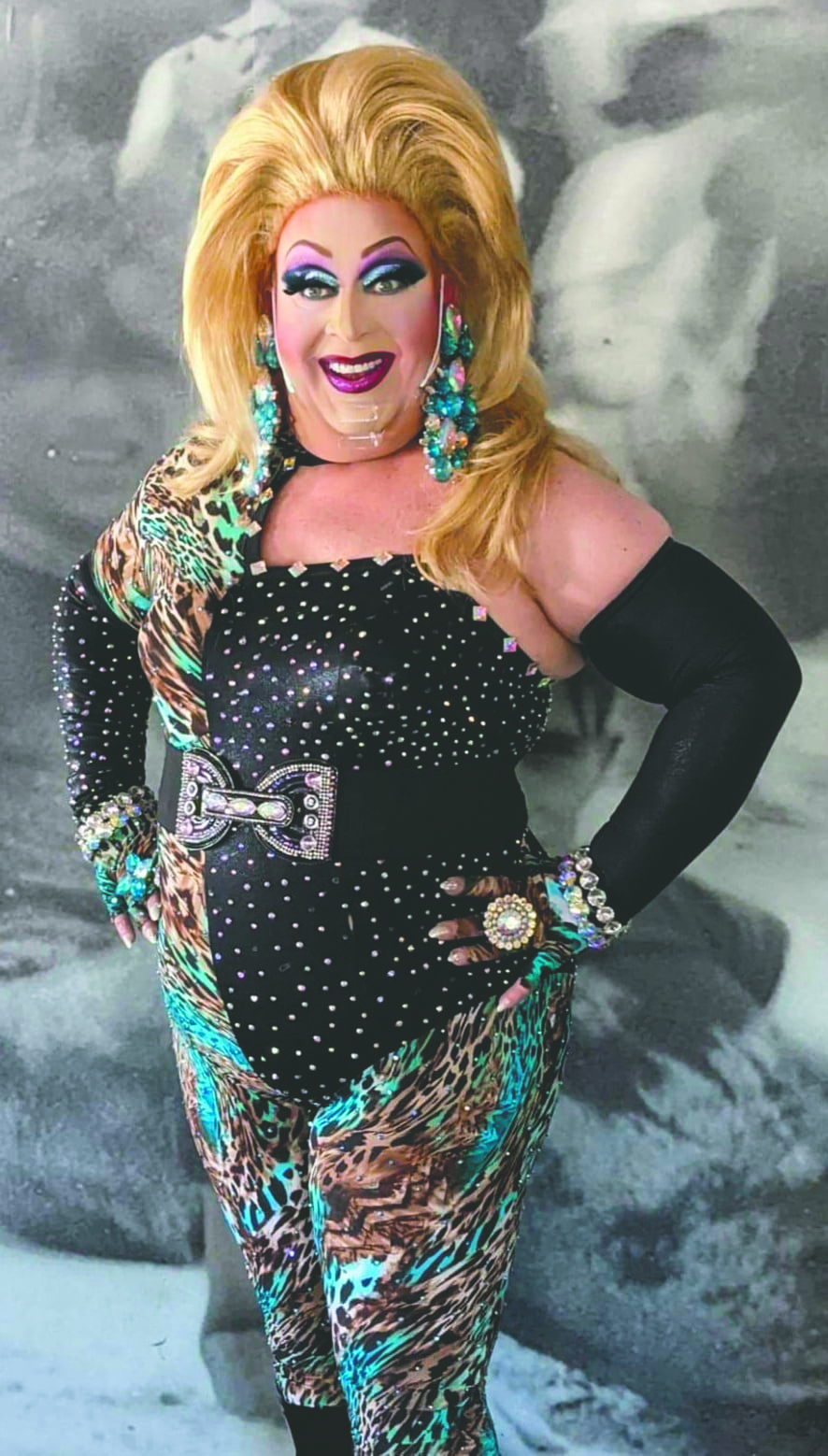 So let’s talk about performing in the “Time of COVID.”

Before we do, I’d like to really make one thing clear: everything I do is with great respect for what COVID is and the devastation it can wreak. We’re chatting as I make my way back to my family for a memorial service for my brother, Terry.

And it’s one of the hardest things I’ve ever dealt with. As we grow up, we learn what death is, and we prepare in our psyche that one day our parents are going to die, because they’re older. And even though my brother was older I was, I was not prepared for this. Even more devastating was that we had to say goodbye through a Zoom meeting. Having to watch him be taken off the ventilator on a Zoom call. I will not go into graphic details, but I will never forget.

And I’m one of the fortunate ones. I’ve experienced COVID first-hand. I actually had it myself in July and had to take time off to heal and get myself back to a safe place. My friend and colleague, Roxy Overbrooke, struggled with COVID and needed to be on a ventilator, and—I’m thrilled to say—recovered.

But the point being, no one is careless or arrogant about our work.

Well said. Thank you. And how did getting back to work come about?

Our ability to perform was totally dependent on the venue’s ability to adapt. For a while, everyone was shut down, and we were all terrified of what that meant. Not of just the virus itself but also terrified about what it meant to our way of living. For me, this is a livelihood, not a hobby. And for the venues, it was survival.

So, the venues began working with all the local health guidelines—social distancing, masks, etc.—to find a safe way to get us all back to business.

And we as entertainers needed to decide if we were willing to do that. We had to evaluate the health risks—servers, bartenders, and performers. Were we putting ourselves at risk? We evaluated the situation and decided the answer was no.

Maybe we weren’t classified as essential workers, but I had to ask, was performing and entertaining of value to me and to the community? With the steps being taken, could I tell someone to put on a mask and come out? And I decided my answer was yes. People are afraid. They’re alone. They needed to laugh. So yes, precautions in place, what we were offering had value.

Emotionally, was it frightening for you?

Yes. But part of my core is my faith. Part of that says you should find what it is that God created us to do and that’s what you should do. What I am here to do is to make people laugh and smile and be happy—that is my purpose. It was as natural to me as a nurse deciding they were going to go to work, or a teacher deciding to open their classroom. It’s what I’m supposed to do.

We touched on the venue’s safety responsibilities, but what are the safety measures you take to perform? How has it changed your show—physically and/or emotionally?

The big obvious safety measure for the performers was masks. We determined clear masks worked the best. And because we were wearing them, this led to other changes such as I had to learn to hold a mic differently, to speak louder, enunciate even more.

Physical changes are challenging. The hardest was adjusting to performing to a full-time, seated audience. A lot of drag occurred in clubs where people were standing and milling, and occasionally perhaps getting a bit rambunctious. Now everyone is seated with nothing to distract them, giving you their often quiet, undivided attention. And losing that rowdy atmosphere, where you knew you could joust with someone, means that bonus “crowd entertainment” is minimized, if it’s there at all. So overall, there’s a big difference. 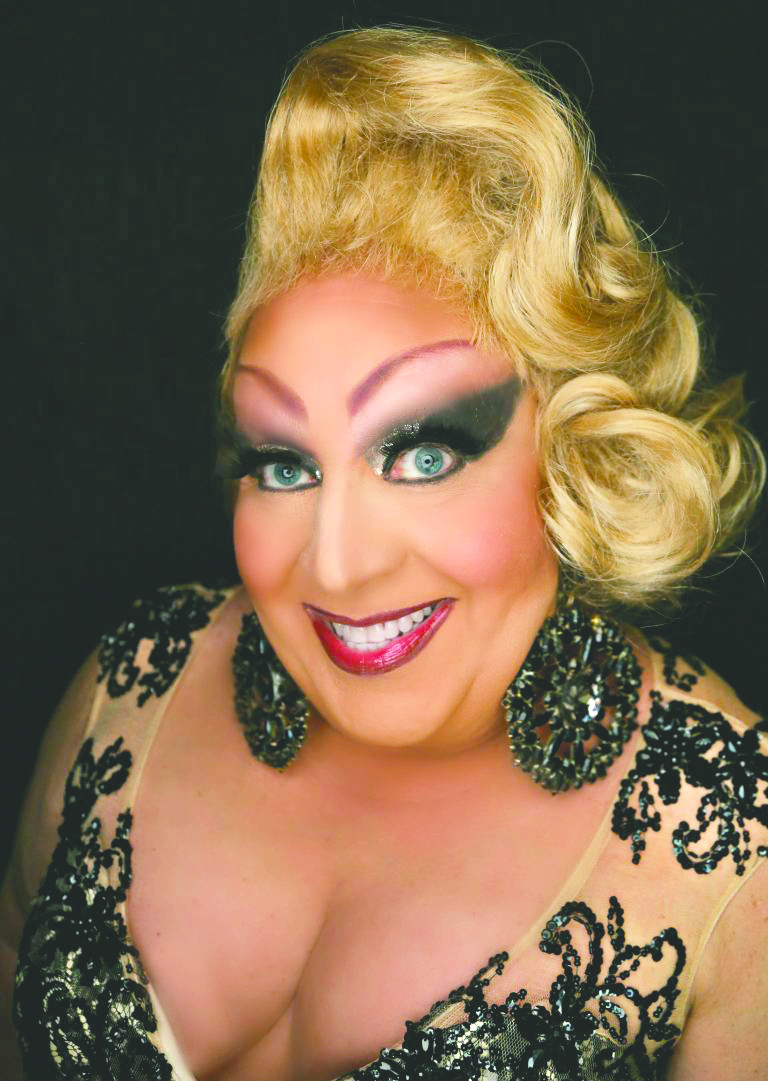 And this overlaps the entire “making a connection to an audience.” Which is one of the keys to the success of any performer. Since we’ve often worked “in the crowd,” some of the connections we used to do were physical—a touch to a hand, a hug. Can’t do that in a safely, socially-distanced room.

Even the money is different. If someone has a tip for you, you can’t take it from them. It has to be put in a bucket.

As a performer—don’t touch them, don’t take money, keep your distance—is a counterintuitive experience. And it’s changed how I present the show.

How often do you update a show?

Forgetting guidelines, how has your show, your art, changed over the years you’ve performed?

Over the years I’ve become a more confident entertainer with a better ability to read my audience and craft the humor and conversation they’d enjoy. So mostly, it’s more free-wheeling rather than planned. The “planning years,” where everything was more calculated, allowed me to build to a different level of success, one where I l read a room and get to be funny and entertaining on the fly.

Where can someone come to see you?